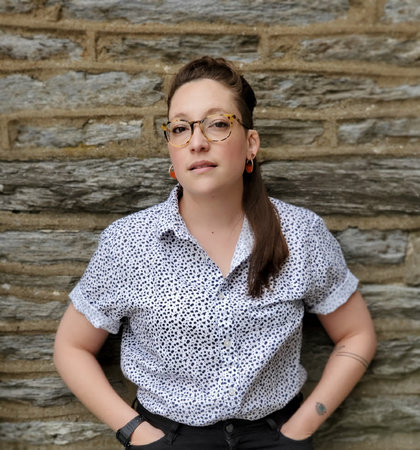 Sara Nović holds an MFA from Columbia University, where she studied fiction and literary translation. Her first novel, Girl at War, won the American Library Association’s Alex Award, and was a finalist for the Los Angeles Times Book Prize. She is an instructor of Deaf studies and creative writing, and lives in Philadelphia with her family.

“The war in Zagreb began over a pack of cigarettes.” The opening line of Girl at War, Sara Novi?’s breathtaking debut, sets the mood for the pages to come: small strokes, large scope, foreign yet familiar. Like much of Yugoslavia in the ’90s, Croatia — the novel’s opening backdrop — is a tinderbox, and Ana and her family bear witness to the coming flames. Ana is young, brave but naive, and eventually displaced, uprooted by her homeland’s brewing civil war and bound for America.

Girl at War spans decades and continents, and as Ana struggles to bridge the gap between her two selves, the book unfolds larger questions about the diasporic mind, the meaning of identity and place. Novi?, herself Croatian, joins Penguin Random House to discuss the story’s inspiration, her research process, the literary treatment of the Yugoslav wars, and her bookish forebears.

PENGUIN RANDOM HOUSE:To what extent does Girl at War reflect your own life story, if at all?

Sara Novi?: Girl at War is fiction, so that’s the short answer. The longer answer is that the project was borne out of a trip I took to Croatia to visit some family and friends after I graduated from high school in 2005. Disillusionment and a feeling of abandonment by the West were frequently expressed, and everywhere I went people wanted to tell me their stories, which I recorded in my journal. When I returned to college, I was shocked to find that most of my peers didn’t know where Croatia was or what had happened there, and wrote a short story about a young boy’s trauma and his inability to deal with it in present-day America. My professor encouraged me to keep writing on the subject, and I continued to write outward in all directions. That first story is pretty much intact as the end of part one of the novel now, (though the character obviously changed genders to become Ana). So this book is not my story, or any one person’s, though I certainly identify with Ana in certain ways, like being a tomboy, and struggling to work out where I fit in and where “home” is.

PRH: Did you conduct research or collect anecdotes from people who lived through the Yugoslav Civil War? (Some scenes felt so real and unreal all at once — like the imaginary gunfight game children would play, it being ‘essential to make eye contact’ to know who was killed.)

SC: Yes, a lot of the anecdotes in the novel stem from stories that were told to me by family, friends, or just people I met while in Croatia (and later in Bosnia). The gunfight game was one such story, as was the cigarette story that starts off the novel. I also did a lot of nitpicky research while writing the novel because, even though it’s fiction, I wanted this book to be able to slide into the historical timeline of this war as accurately as possible — this was, after all, an event that really did damage many people’s lives, and I wanted readers to feel that.

I did a lot of looking at and drawing maps — where whose troops were at what time, what roads were open and closed when, and even what the weather was like during some of the larger events in the novel, like the fall of Vukovar. Though there is a lot of video footage of the war, in certain aspects it’s not very well-documented conflict, partly because the majority of the most egregious war crimes on all sides were committed by paramilitary groups rather than “real armies.” Trauma also plays tricks on memory, and sometimes people gave me conflicting information, but I tried my best to verify what I could.

PRH:In the writing of Girl at War, did the weaving of fiction and fact come naturally to you? Was one easier than the other?

SC: It’s funny because the first parts of the book that I wrote were the true ones, those straight-up vignettes that I’d written in my journal. Then later, when I’d share the early manuscript with people, it tended to be the most factually accurate parts that people would call out as being unbelieveable. This, I think, is the nature of war — it’s counterintuitive. Still, I had to learn to balance keeping the truth of the narrative and exercising the freedom to change elements about a place or character so that it made sense, narratively, for a reader of fiction.

PRH:In that same vein, what goes into deciding when to draw the line between what follows the historical record and what is of the imagination?

SC: I don’t think fiction’s job is to educate, necessarily. I think its main job is to give a reader the capacity to empathize with something foreign to him/her. So the trick to this is character development. In trying to create full, real people with which readers can identify, that’s when I invented the most.

PRH:Are there other novelists who have fictionalized the Yugoslav wars, or is it still a rather underrepresented subject in fiction?

SC: I think both! There are other novelists who have written great books about these wars — Aleksander Hemon, Dubravka Ugreši? and Tea Obreht come to mind. And of course, there is a lot of writing coming out of all the countries of the former Yugoslavia that American, or English-speaking, readers never really see, or see in tiny numbers in translation. However, I do think Girl at War offers a somewhat unique perspective because most people think about Bosnia and Sarajevo when they think about this conflict, and this book is mainly what happens before the war in Bosnia and the NATO intervenion.

PRH:And as to your writing style: What writers, living or dead, are your greatest influences?

SC: While I was writing this book I was reading a lot of Sebald and thinking about the nature of trauma and memory, and how that fragmentation can best be represented in fiction while still maintaining a certain level of comprehension –because the question of who was fighting who and why is such a complicated one in this book, I was mindful of trying to keep that clear for the reader. On the level of the line, of course, I don’t write much like Sebald at all, but he did have a big influence on the way I ended up structuring the book.

I think Izet Sarajli?, a Bosnian poet who I’ve been translating recently, also shaped the way I write about violence — he writes these very spare images, but they are unflinching, unapologetic, and often injected with a bit of black humor that I hope some of the children’s games in this novel have.