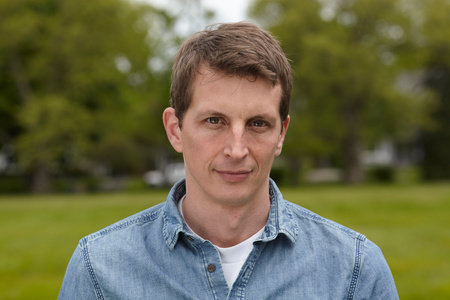 GARTH RISK HALLBERG’s first novel, City on Fire, was a New York Times and international best seller, has been translated into seventeen languages, and was named one of the best books of 2015 by The Washington Post, Los Angeles Times, San Francisco Chronicle, The Wall Street Journal, NPR, and Vogue. His short stories have appeared in Prairie Schooner, Glimmer Train, and Best New American Voices 2008, and he has written critical essays for The New York Times Book Review, The Guardian, The Millions, and Slate. A two-time finalist for the National Book Critics Circle’s Nona Balakian Citation for Excellence in Reviewing, he lives in New York with his wife and children.

Garth Risk Hallberg came onto the literary scene last year with all of the requisite hoopla you’d expect surrounding a debut author who has readers and publishers whispering next big thing and great American novel. Thankfully, his first novel, City on Fire, delivered in so many ways. As the behemoth of a book came to paperback this week, we gleaned some advice, retrospection, and recommendations from the writer.

PENGUIN RANDOM HOUSE: As an accomplished debut author who is now seeing his first published novel – City on Fire – move on to its paperback life, what advice would you offer to another debut novelist?

GARTH RISK HALLBERG: Well, I never really expected to see the book published — even as late as summer of 2015, I was sort if in disbelief — so I’m not sure I can discern any blueprint looking back. I guess I would say to someone about to publish a first novel what I’d say to someone trying to write one, which is to kind of tune out the noise machine (easier said than done) and remember that books really come alive between you and a stranger somewhere out there far away, in some private space, ideally feeling some of the same magic you do when you’ve read the books you love. You just have to try to write the kind of thing you love, I think. And not be afraid to be afraid. I was terrified when I first imagined this book, but I came to feel that the fear was not the signal to the artist to run away, but the signal that this is the project you need to confront.

PRH: You were born in Louisiana and now reside in New York City. What brought you here? Have your feelings about the city changed since your arrival? Biggest city gripe? What do you cherish most about New York?

GRH: Books brought me to New York. Books and people. It just always seemed like a place of great mystery and energy and variety, a place for all the kinds of people who don’t belong anywhere else. I remember falling in love as a kid with the vivid eccentrics of Stuart Little and Harriet the Spy and Tales of a Fourth Grade Nothing and From the Mixed-Up Files of Mrs. Basil E. Frankweiler … and then noticing that the books themselves came from New York, were published in New York. I thought: That must be the best place ever. And for me it was, and is. My life is a lot more boring than it was when I moved here in 2004, and certainly more boring than it was when I first started coming here as a teenager in the mid-’90s. I spend a lot of my time alone at a desk, and so it’s tempting to say that the city has grown more predictable, but I tend to think that’s probably as much me as anything. And still when I want to get fired up, I go for a long walk in Manhattan and let myself be surrounded by a million different people. It’s the people I love the most.

PRH: New York City is a solid character in City on Fire. If the city were a person in your life today, what would you say to her?

GRH: In a way, the book is what I wanted to say to the city, and an attempt to repay the gift. So I guess I would say to her what the book says in the last paragraph — but you have to read the whole thing to find out.

PRH: Who of your contemporaries in literature do you enjoy reading? Do you have a favorite book from this year thus far?

GRH: I have pretty catholic taste. Of writers in English who are in my age bracket, I find Zadie Smith thrilling as both a novelist and an essayist, and I very much look forward to her new book, Swing Time. I think Rachel Kushner’s great. I really like the Irish writers Paul Murray and Eimear McBride and Colin Barrett, and the English writer Tom McCarthy. I much admired Teju Cole’s Open City, Max Porter’s Grief Is the Thing With Feathers, and Geoff Dyer’s Death in Venice, Jeff in Varanasi. I’m a Joshua Ferris fan, too. A Rivka Galchen fan. I’m always interested in what Michael Chabon and Jonathans Lethem and Franzen are doing, though they’re a little older. Deborah Eisenberg is, I think, the best writer of her generation. I read a lot of fiction in translation, and this year I’ve much enjoyed Alvaro Enrigue’s Sudden Death, Valeria Luiselli’s Faces in the Crowd, the forthcoming Javier Marías, and Javier Cercas’s brilliant Anatomy of a Moment. And of course, like everyone else, it seems, I’ve been enjoying Elena Ferrante and Karl Ove Knausgaard’s serial novels. I just finished volume 5 of the Knausgaard, which blew my doors off. I think it’s the best one.

PRH: The reading playlist you put together for LargeHearted Boy hearkens back to so many modern rock/punk classics – Bowie, Lou Reed, The Ramones – as well as newer acts like Arcade Fire and U2. Is there anything new you’re listening to lately that you’re loving?

GRH: I’m pretty out of the loop, due to my weird personal prohibitions about the internet, but my friend Hamilton Leithauser, who provided music for the book trailer, just slipped me a copy of the album he did with Rostam from Vampire Weekend. There’s a song on it called “In a Blackout” that I was desperate to use for the book trailer, but alas, the time was not yet ripe. But the time for that song is now, and the album as a whole is fantastic. Otherwise, I’ve been wandering in the enchanted garden that is the Prince catalogue …

GRH: I’m pretty sure I’m working on another long piece of fiction, though only time will tell. Otherwise, my lips are sealed.