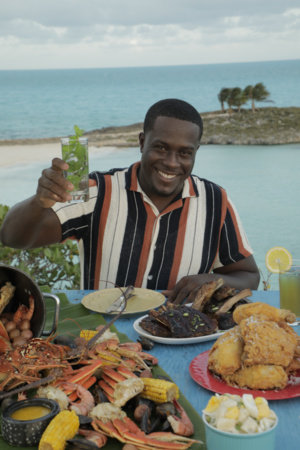 ADRIAN FORTE is a chef and culinary consultant for a wide range of clients and brands, and operates YAWD, a modern Caribbean pop-up restaurant (which garnered incredible reviews for the much-needed island vibes it brought to Toronto during the pandemic). Born in Kingston, Jamaica, Adrian moved to New York City in 2003, where he attended high school, and then to Canada, where he studied culinary arts at George Brown College in Toronto. Upon graduating, he became the executive chef at Gangster Burger and Rock Lobster, one of the co-founders of Dirty Bird Chicken & Waffles, owner of AF1 Caribbean, behind the menu development of Aunty Lucy’s Burgers and guest chef at Café Boulud at the Four Seasons. Adrian uses his platform to champion the importance of Afro-Caribbean cuisine, and has been an integral voice in Canadian hospitality’s movement toward a more equal and inclusive future.