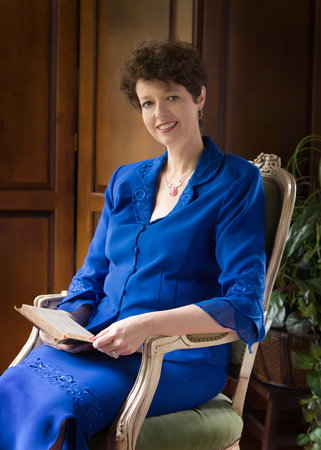 Angela Knight is the USA Today and New York Times bestselling author of the Mageverse series and the Warlord series. Besides her novels, Angela’s publishing career includes a stint as a comic book writer and ten years as a newspaper reporter. Several of her stories won South Carolina Press Association awards under her real name. She lives in South Carolina with her husband, Michael.

Seduced by a Guardian

Nick Wyatt came to me through the post-surgical haze a wicked smile on his lips and sparks of magic flashing around his hands.

Did I mention the drugs were really good?

I was in the middle of writing what was supposed to be the second book in the Time Hunters series when my gall bladder started spitting razor blades into my abdomen. Well not really but that’s what it felt like.

Not surprisingly the book wasn’t going well. Pain and creativity do not make a good mix. So I finally gave in and had my gall bladder out.

I was back home recuperating on a fluffy pink codeine cloud when Nick appeared: gorgeous seductive and magical.

I know a hero when I see one. There was only one problem.

Enforcer already had a hero. Alerio Dyami is a Temporal Enforcer from the future six feet-six inches of handsome cyborg cop. He is deeply painfully in love with a beautiful subordinate Dona Astryr also a computer-enhanced warrior. They’ve been carrying on a stormy relationship since the first “Time Hunters” book Warrior.

So Nick couldn’t be the hero of Enforcer.

For a while I toyed with the idea of using him as a minor character in Enforcer thus setting him up as hero of the third book in the trilogy. I’ve done this before and it’s worked pretty well.

It didn’t take me long to realize that Nick as a minor character wasn’t going to fly this time. If I put him in Enforcer he was going to take over and steal the book away from Alerio and Dona. Not that they’re weak characters but I know my Muse and she wanted to write about Nick.

No I’m not a nutjob with multiple personalities.

Like every author I have discovered that I can plot a book in exacting detail only to find that I just can’t write it. That’s because my creative subconscious — alias my Muse — has something completely different in mind. So the Muse grabs her picket sign and goes on strike. I can’t write a single solitary word until I figure out what she wants to do instead.

The really infuriating thing is what the Muse wants to do is always much much cooler than what I’d originally planned.

This has happened at least once with every single book I’ve ever written. I’ve written ten of them plus 20 or so novellas so I recognize the symptoms.

Thing was I’d already published a teaser chapter for Enforcer at the end of Warrior; the readers were expecting Dona and Alerio’s story. This put me in a pickle.

So I did what writers always do in such situations: I went whining to my wonderful Berkley editor. Now Cindy Hwang has been my editor for five years and she knows my process as well as I do.

She told me “Write Nick’s book. You can do Alerio’s and Dona’s story as the third novel.”

So I did. And once again my Muse was right.

Guardian was a blast to write all the way through. Nick is a great hero and his heroine Riane Arvid is a sexy cop from the future who is stranded in the past. They’re being stalked by a cult of vicious warriors intent on stealing a magical gem that’s the source of Nick’s abilities.

Meanwhile Riane’s talking wolf partner is desperately searching the time stream for her. Frieka who first appeared in Jane’s Warlord is a furry cyborg smart-alec who considers Riane his adopted daughter.

He also gets all the best jokes.

For more about Nick and Riane stop by my website at www.angelasknights.com. You’ll find excerpts and a Guardian book video there along with lots of other goodies.