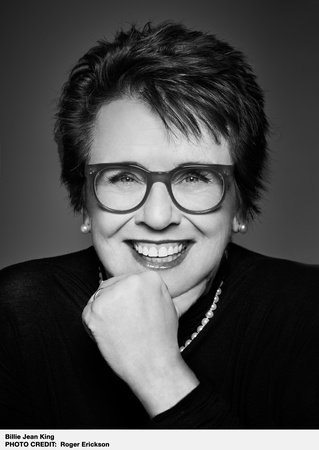 BILLIE JEAN KING is the first female athlete to receive the Presidential Medal of Freedom. She is the founder of the Billie Jean King Leadership Initiative, the Women’s Tennis Association, and the Women’s Sports Foundation; she co-founded World Team Tennis; and she is part of the ownership group of the Los Angeles Dodgers. In 2006, the National Tennis Center was renamed the USTA Billie Jean King National Tennis Center. In 2020, the Fed Cup was renamed the Billie Jean King Cup, making it the first global team sports competition named for a woman. She was one of Life magazine’s “100 Most Important Americans of the 20th Century,” and in 2018 she received a Lifetime Achievement Award as part of the BBC Sports Personality of the Year Awards. She is an Adidas Global Ambassador, a past member of the board of the Elton John AIDS Foundation, and a past member of the President’s Council on Fitness, Sports and Nutrition. She lives in New York.