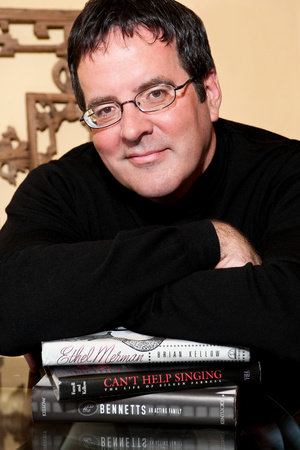 Brian Kellow is the author of Can I Go Now?: The Life of Sue Mengers, Hollywood’s First Superagent; Pauline Kael: A Life in the Dark; Ethel Merman: A Life; The Bennetts: An Acting Family and the coauthor of Can’t Help Singing: The Life of Eileen Farrell. His articles have appeared in Vanity Fair, The Wall Street Journal, The New York Observer, Opera, and other publications. Kellow lives in New York City.

Editor’s Note: Brian Kellow is the author of Pauline Kael: A Life in the Dark, which was a 2011 New York Times Notable Book of the Year and also appeared on the Best of the Year lists of Entertainment Weekly, The New Yorker and the Chicago Tribune. He is also the author of Ethel Merman: A Life, The Bennetts: An Acting Family, and the coauthor of Can’t Help Singing: The Life of Eileen Farrell. He is the features editor of Opera News.

Brian has just published his latest book, Can I Go Now: The Life of Sue Mengers, Hollywood’s First Superagent. Mengers, who passed away in 2011 at the age of seventy-nine, is one of the entertainment world’s most storied personalities. Arriving on the scene in the 1960s, she was brash, ambitious, and effective, eventually coming to represent Barbra Streisand, Ryan O’Neal, Faye Dunaway, Michael Caine, Candice Bergen, and others. In spite of her colorful personality and larger-than-life presence, Mengers was a hard woman to get to know, so Kellow’s biography offers just what fans – and those new to the story of Sue Mengers – need. We got to ask Kellow a few questions about his research and more. Read on.

PENGUIN RANDOM HOUSE: Let’s start at the beginning: At what point in your life as a writer did you know you wanted to write a Sue Mengers biography? What is it about her life in particular that attracted you to her story?

BRIAN KELLOW: I was aware of Sue Mengers’ presence on the Hollywood scene when I was growing up in the 1970s. This was her heyday. I saw her famous segment of “Sixty Minutes” in January of 1975, in which she was interviewed by Mike Wallace. I didn’t consider her as a biographical subject until a few years ago, after Pauline Kael: A Life in the Dark, my biography of The New Yorker film critic, had been published. I had done so much research on the filmmaking of the 1970s with the Kael book, and I wanted to try to stay in that period, if I could, with my next subject.

I love big, complicated, tough personalities. Sue was one of the biggest, most complicated and toughest. Her story is one of complete reinvention, and I found that fascinating. Her own reinvention of self kept raising its head in her professional life in such interesting ways.

PRH: In a life as full as that lived by Sue Mengers, surely you must have had to leave some things out in the interest of time and space. Is there anything that landed on the cutting room floor that you wish didn’t?

BK: A lot of things wound up on the cutting room floor in my Pauline Kael book that I wish had been in the final version. This time around, I got in everything important that I wanted to include. I had to be careful: there were so many funny stories about Sue, and I didn’t want it to turn into The Sue Mengers Joke Book.

PRH: Honesty seemed to be an important part of Mengers’ identity, yet it seems it may have wholly existed only in her work life. With this in mind, was there a part of you that hoped to reconcile the personal and professional lives of Sue Mengers?

BK: Whenever someone reinvents herself as dramatically as Sue did, I think that that person always feels somewhat in danger of being “found out” by others. I think it’s part of the reason it was so difficult for her to receive affection and kindness from people; she had a wall up a lot of the time. It made her tricky to write about, but no less fascinating to me.

PRH: Considering her exposure, reputation, and renown, how do you think her own Hollywood presence impacted the success of her clients?

BK: There was a long period when so many stars wanted to be represented by Sue Mengers; they believed that great things would happen if only they could sign with her. She could certainly get anyone on the phone – any director, producer, studio head – and that kind of access was hugely important. Lots of agents couldn’t do that. Lots of them now can’t do it. She was a major personality who fascinated people, and she didn’t have trouble getting face-to-face time. That alone made her a desirable commodity among Hollywood actors. Also, she had good script vision and could often see how a client of hers could benefit from being cast in a given picture. Good example: Candice Bergen in “Starting Over.” Bergen had her eye on the leading role of the right-thinking schoolteacher, eventually played by Jill Clayburgh. Sue told her that the great part in the script was the selfish, shallow ex-wife. Bergen finally agreed and played it, and it launched her on a new career as a comic actress.

Most of all, she looked after her clients’ financial affairs better than they themselves did, in most cases. She was fixated on getting them the top money because she knew their stardom wouldn’t last forever. She got them to face that reality as well.

PRH: Many of Mengers’ career successes correlate with some of cinema’s biggest films. What do you think her impact on the success of cinema during her reign was? In other words, do you think her work going to bat for her clients ultimately impacted the quality of these films?

BK: Sue really understood the whole zeitgeist of ’70s Hollywood. She was very keenly attuned to the changes that were happening, and she had a good eye for how her clients could benefit from it. But she didn’t necessarily think that a bad film was going to do you permanent harm. She believed that actors should keep working if they wanted to be movie stars. If the current film wasn’t so great, well then, the next one might be. She had a certain faith in the rhythm of picture-making, that every single movie didn’t need to be a modern classic.

PRH: Recent television characters such as Peggy Olson in “Mad Men” and Claire Underwood in “House of Cards” are beginning to reflect a more progressive, evolved image of women in the workplace. Do you think the influence of Sue Mengers was a factor in this evolution?

BK: I have a feeling that Sue Mengers was a kind of touchstone when the writers of “Mad Men” were creating Peggy Olson. Sue was very emblematic of that particular time. She came out of the whole “Sex and the Single Girl” image of the modern woman. It’s funny that she didn’t see herself as any kind of raging feminist. She wasn’t a particularly keen mentor to other women, and she loved being the only woman in a boys’ club. She loved manipulating men, making fun of them behind their backs. But I think the IDEA of what she achieved is very attractive to people, still. And she had a lot of imitators, in the agency business, who tried to follow her lead. Recently I did an interview with someone who was insistent that I claim Sue Mengers as a feminist leader. I can’t, really, if I’m going to be honest. It’s just not how she saw herself – at least not in such a specific way.

PRH: Bette Midler had a short run on Broadway as Sue Mengers in the show “I’ll Eat You Last.” Did you see it? What did you think?

BK: I think that John Logan did a very fine job with “I’ll Eat You Last.” He wanted to serve up an entertaining one-act show, and he did. The play doesn’t get into the darker, more depressive aspects of Sue’s personality, but that’s not what he was after. And somehow, I’m not sure that Bette Midler would have wanted to go there, either. That’s purely speculative on my part, because I don’t know her, and I don’t know John Logan. I think they were after a fun evening, and they delivered it. I was delighted that the play was a hit, because I’m always happy when there are sellout hits on Broadway. And, selfishly, because it helped pave the way for my book! It brought Sue back into the general conversation, though I’m not at all sure that she ever really left it.

One thing that struck me about the play, because I felt it to a certain extent in writing the book: Sue was such a wit, and an outrageous character, that I wanted to make sure that didn’t get swallowed up by the darker aspects of her character. I tried very hard to keep it all in balance. Years ago, I discovered Dorothy Parker, and when I found out what a mess Dorothy Parker was, it did affect the fun of reading her poems and stories for me. I wanted to make sure that one thing in the Sue Mengers biography didn’t overshadow the other. I wanted my book to feel a bit like a disco ball that just kept spinning and spinning, while acknowledging the more painful aspects of her life.

PRH: What’s next for you?

BK: Everyone always wants to know what’s next. I’m finishing up my first novel, which I hope to have completed by next spring. It’s about the remote place on the Oregon coast, in Tillamook County, where I grew up, and which is still very close to my heart. It takes place over a fifty-year period, and it deals with three women who move there from other places, and have major difficulties adjusting to such an isolated life. So I’m dealing with women again, but in fiction this time.

I’m also hoping to sell my script The Critic, which my friend Michael Slade and I have written together. It’s a screenplay based on a small section of my Pauline Kael biography, and it deals with Pauline’s abortive attempt, in 1979, to come to Hollywood and try her hand at producing. It was a venture that failed miserably. I think Michael and I have written a good script, and I have high hopes for it. It offers a marvelous role, if I may say so, for a sixtyish actress.

After that, I will write another biography. I’m searching for a subject now.