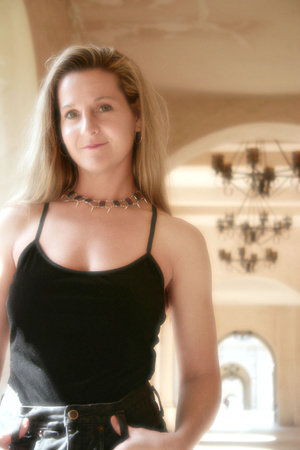 Chris Marie Green is the author of the Vampire Babylon series and the Jensen Murphy, Ghost For Hire series. She tries her best to avoid international incidents whenever she takes a break from her first love, writing, and cheats on it with her other true love—traveling. She has an alter ego named Crystal Green who likes to write hot romance.

Every Breath You Take

Another One Bites the Dust

A Drop of Red

Deep in the Woods

The Path of Razors

Essay on Chris Marie Green’s Deep in the Woods

I wrote my “Vampire Babylon” series for a few reasons. I wanted to:

– flesh out a hunter who was kick-ass yet vulnerable.

– have fun with a group of characters (and I do mean the quirky kind) who would serve as a hunting team.

– create some vamps of a different stripe.

So I started playing around with an idea that fused many of these elements. Since I’m pretty much a storage unit for pop cultural tidbits, I took all of the above, mixed it with a Charlie’s Angels type boss (who’s also a bit of the Phantom of the Opera), resurrected one of the most well-known urban legends of the silver screen (the ghost boy from Three Men And A Baby), and gave it a spin.

Poof—my first Vampire Babylon trilogy was born, stretching awake through (and under) the gothic, noir streets of Los Angeles.

But here was the thing—this story about an erotically charged Hollywood Underground was so big that I knew I wouldn’t be able to tell it all in just one book. So I looked at Harry Potter and how J.K. Rowling used a mythology that spanned seven books—stories in which the big bad villain wasn’t put to rest until the very last installment. I looked at the fascination with Lost. And I decided that my story would be best served by using a longer trilogy arc.

It was chancy. Although there’s a central mystery that’s solved by the end of each book, there were mystery, mythology, and character threads that wouldn’t be tied up until the third book. But in Night Rising, Midnight Reign, and Break Of Dawn, I felt like things did come to a satisfying close…

Until Ace asked me to write another three books.

And I was ready, because I had a yen to explore one of the most haunted cities in the world—London. Also, I had an idea for some vampires who had a lot in common with certain fairy tales. Basically, this second trilogy features what I consider to be the scariest vampires of all—young girls who are lured by an older man making promises to them. Promises he, of course, has no intention of keeping. And, let’s be honest—you never want to tick off a teenaged girl. (I would’ve been the biggest nightmare vampire of all, way back when!)

The first two books, A Drop Of Red (book 4) and The Path Of Razors (book 5), show you a different underground than the Hollywood one, and the trilogy will be closing out with the third installment, Deep In The Woods (book 6), on March 2, 2010. I had such fun doing this trilogy—I got to travel to London, where I blocked out scenes in Highgate Cemetery and Southwark. And when you get to research something as interesting as the effect fairy tales have had on society? Icing on the cake.

If you’ve read the previous five books, thank you from the bottom of my arguably dark heart. : ) If you’d like to start, the books are out there just waiting for you to snag them…much like the things that exist under the ground, watching, waiting…wanting.