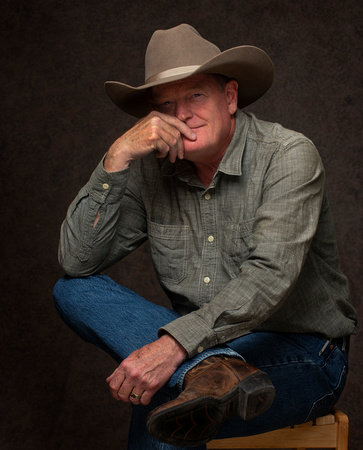 Craig Johnson is the New York Times bestselling author of the Longmire mysteries, the basis for the hit Netflix original series Longmire. He is the recipient of the Western Writers of America Spur Award for fiction, the Mountains and Plains Booksellers Award for fiction, the Nouvel Observateur Prix du Roman Noir, and the Prix SNCF du Polar. His novella Spirit of Steamboat was the first One Book Wyoming selection. He lives in Ucross, Wyoming, population 26.

Next to Last Stand

Junkyard Dogs shows a more sober and reflective Walt than previous novels. Was this intentional?

The town of Durant is hunkered down for a winter storm, and for all the severity of the weather and isolation it might as well be on the moon. Winter tends to bring out the morose in my sadder but wiser sheriff; I looked at the book as my winter of our discontent. It deals with the more venal aspects of human nature and that has a tendency in law enforcement to wear you down in the day-to-day, which might be what you're responding to. In direct opposition with this is that I think this is also the most humorous book I've written.

Parental anxiety (e.g. Walt/Cady, Betty/Ozzie, and Sancho/Antonio) seems to be a central theme of this novel. What inspired this?

Nobody pushes your buttons (both good and bad) like family, and with the claustrophobic aspects of the book, I thought it just fit. The microcosm of community is family, so it was the next logical step in going inward. In a lot of ways that's what the book is about; the things that people do to each other and just how far they'll go. What starts out as a neighborly squabble erupts into a full-blown range war.

This is Walt's sixth outing. What do you do to stay fresh over so many novels?

Tony Hillerman once told me that at the risk of sounding like an old sports analogy—you've got to play ‘em one at a time. Each book is an entity unto itself and you have to treat it with that respect; not try and get it to fit some artificial formula you've cooked up or that might've been successful for you before. Each of the books deals with a social problem as a catalyst such as the one for this one—the economy of the new West. It might be dangerous rolling the dice on each book, but I'd rather offend the readers that way than by writing the same book all the time.

You've incorporated the country's current economic woes into the story. Have you felt its repercussions even in your town of twenty-five residents?

There's always a cushion in rural living, but times are hard for a lot of people and I think it's important to reflect the world in which the characters live accurately. The financial limitations that Walt faces as a small, rural police force are more of an advantage to the writing than a hindrance. Walt can't always get on his cell phone or computer and look for answers, so instead he falls back on old-style policing, which lends itself to the exploration of character and humanity. That stuff is always going to be more interesting than gadgets.

Sometimes, the setting of a novel can be so vivid that it's like another character. In Junkyard Dogs, one could say that about the weather. Is it really that much of a presence? Do you, like Walt, fantasize about retiring to New Mexico?

You know, there was a point last spring where I tractored the six-foot drifts on my ranch road four times in two weeks, and that got old. I live in Walt's surroundings and I think that's an advantage in the writing. I'll let you in on a dirty little secret of mine, a way that I'm very different from Walt—I love cold. I built my ranch in northern Wyoming for a reason. If I'd wanted to, I could've built it in New Mexico or Arizona but I like the winter; it keeps you tough. Walt fantasizes about warmer climates, but I don't think he'd last here—as much as he'd enjoy the great Mexican food, he needs the high plains.

In one passage, the Emergency Room doctor tells Walt that Geo's "hair has grown through his long underwear" (p. 16). Is this, or any of the other colorful stories in the novel based in real life?

You caught that, huh? It's true. They brought a neighbor of mine in after he cracked a few ribs and discovered that indeed, his hair had grown through his long underwear. There are so many weird and wonderful things about where I live, and it's just too much of a temptation to place them in the novels; most of the time when somebody confronts me about something ridiculous in my books—it's actually a true story.

Your last novel, The Dark Horse, featured a highly intelligent horse and a woman who felt more connected to horses than humans. Here, the junkyard dogs, Butch and Sundance, have very distinct personalities and loyalties. Do you believe that animals are capable of good and evil?

I think we can discern their actions as good or evil, but that's just us. There was a character in my last novel who stated my feelings on the subject best, "Animals is some of the finest people I know." In many ways, the defense for Butch and Sundance is very similar to the ones we have for ourselves—just doing their job. Thankfully, Dog was just doing his…;

Some might think that big-time drug dealing is an urban problem. Would this be an incorrect assumption?

Yes. For production purposes, these individuals need privacy and there's a lot of open country out there. This isn't exactly a news flash with the number of methamphetamine and marijuana busts that have been made across the country in very rural areas.

Previously, you've said that outrage over social inequities inspires your work. Is that the case in this novel?

Not much question about that, is there? If you look at the differences between Red Hills Arroyo and the Stewart compound the differences become pretty evident. A lot of the economy of the West is one of the haves and the have-nots, and I'm not sure it's getting any better. I get outraged pretty easy, and it's great fuel for the writing.

What's next for Craig Johnson and Walt Longmire?

Hell Is Empty is the title of the next book and it comes from Prospero's line in The Tempest—"Hell is empty and the devils are all here." Walt is involved in an exhumation in the Bighorn Mountains when a number of individuals escape from a private transportation firm. The novel is a metaphor for The Inferno, which Saizarbitoria happens to be reading in an attempt to make up for the lack of liberal arts education in his criminal justice degree. When Walt starts out after these very dangerous individuals, Sancho pokes the paperback into his pack for reading material and the similarities begin to mount. Can anybody remember who Dante's guide through hell was?