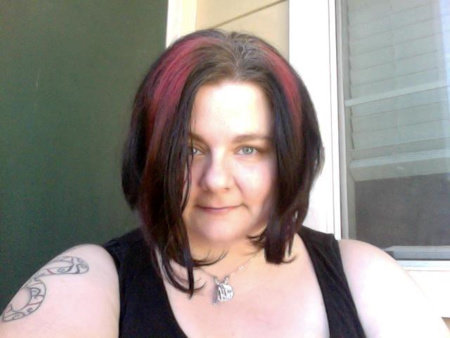 Dianne Sylvan is the author of The Circle Within and The Body Sacred. She resides in Austin, Texas, with two neurotic cats.

A Novel of the Shadow World

Shadow’s Fall is the third book in your Shadow World series. How have things changed since the end of the second book, Shadowflame? And what hasn’t changed?

Shadow’s Fall takes place three years after the end of Shadowflame, and Miranda’s settling in to her life as Queen as well as her fame as a musician – she’s won a Grammy, sold millions of CDs, and had the media prying into her private life, which puts her in a tricky position because of course nobody can find out she’s a vampire. The awesome thing is that she’s got her geek husband who can create all of these technological solutions that fool people into thinking she’s human.

Without giving too much away, what’s in store for Miranda and company in Shadow’s Fall? Will we see any of the secondary characters from Queen of Shadows and Shadowflame? Any exciting new characters?

Almost everyone who didn’t die in Shadowflame will reappear in Shadow’s Fall. The story centers around a ten–year vampire political summit as well as a major music festival in Austin, so a lot of powerful personalities will clash. We’ll get to meet some of the people that have only been talked about before, and some old rivalries will come to a head. There are two new major characters – a vampire named Jeremy who works for one of the villains, and a human Witch named Stella who’s a big Miranda fangirl.

The Shadow World books are set in your hometown of Austin, Texas. Why did you choose to set the books there? Are some of the landmarks real places? Can people actually go sit at the same table at Amy’s where David and Miranda had ice cream?

I love this city. It’s the only place in Texas I could live. Austin has its own spirit, and I wanted it to be almost a character in the story. And yes, many of the landmarks are real; the two places people always ask about are Amy’s Ice Creams and Kerbey Lane Café, both of which are very much real, although the Kerbey location I was writing about in the first two books has moved since then.

What authors would you say have influenced your writing, storytelling, and world–building?

Odd as it may sound, I’m more influenced by television than books. I honestly don’t read a whole lot of fiction, and what I do read isn’t urban fantasy – I like memoirs, particularly stories of personal transformation. My major influences are people like Joss Whedon and the showrunners of The Vampire Diaries, Julie Plec and Kevin Williamson. When I write I tend to envision scenes complete with camera angles and music – I’ve been doing that since I saw my first Buffyepisode. On the other hand, back in my teens and 20s I read a lot of high fantasy like Mercedes Lackey, so I tend to structure series more as one giant story than a monster–of–the–week sort of thing.

There are a number of mythological references throughout the books drawing from Classical as well as Judaic mythology. How does mythology come into the writing process for you? For example, did you write Queen of Shadows with the Hades/Persephone myth in mind or did the similarities occur to you later?

I come from a NeoPagan background, so ancient myths have always held a lot of power for me. A long time ago I made the connection in my head that my favorite fairy tale, Beauty and the Beast, was essentially the Persephone myth – and most vampire stories, or at least the romantic ones, are retellings of Beauty and the Beast to one degree or another. I didn’t exactly set out to emulate the myth with Queen of Shadows, but the deeper I got into the story the more I realized that’s what I was doing. Since a mythological slant fit the first book so well, I just sort of ran with it, and Shadowflame has echoes of the Garden of Eden and the story of the goddess Lilith. Shadow’s Fall has a sort of backwards phoenix myth to it, but that myth won’t be complete until the next book. Of course, by then we’re getting into the mythology of the vampires themselves, which is going to be very important to the story arc.

The books have lots of nods to pop culture (David’s geeky t–shirts, etc.). What are some of the television shows, movies, etc. that have influenced you?

Aside from the ones I mentioned above, I’m a big lover of most of the standard geek staples: Star Wars, Doctor Who, Firefly. I’ve also been a follower of Supernatural, which I loved for its adaptation of the Apocalypse story from Revelations and the whole angel/demon mythos. I eat that stuff up. I also like a few of the more pedestrian procedural shows, like Bones, Castle, and NCIS, which factor into my books a bit too. I’m an unapologetic Harry Potter fangirl, and I recently read The Hunger Games trilogy and loved it – sometimes reading an author whose style is completely unlike your own is incredibly valuable. All of those things influence my writing. I’m definitely a child of my culture.

Would you be a Miranda Grey fan? Do you listen to her kind of music?

Oh yes. Miranda’s music, in my head, is the bastard love child of Tori Amos and Florence + the Machine. In fact as I’m typing this I have “Hey Jupiter” playing on my iPod. I especially love piano–driven singers; Miranda’s piano is the same one Tori plays, which is where I got that idea – the Imperial Grand has such a rich, dark sound. It just said “vampire music” to me.

What made you decide to make Miranda a musician?

It seemed like a natural outgrowth of her living in Austin – we’re up to our ears in musicians here. First came the idea of her being cursed with this intense empathic gift, and I asked myself how she would channel that if she didn’t really know how to control it. I have really strong emotional reactions to music, so I wondered what would happen if the person singing could consciously manipulate that.

What inspired the Shadow World political structure? The whole Prime/Queen Pair and Signet configuration? How about the stones that flash?

It came together piece by piece. I was really tired of the usual soul–mate schtick where you meet this person and after that your relationship is blissful forever. I always thought having a real soul mate would probably be really hard – someone who comes into your life with this intense connection to you, and yet you’re still two people with two histories, two personalities, and two sets of goals and values. I find stories of perfect romance exceedingly boring. Like I often say, a woman’s story doesn’t end with her man.

Also, I wanted David to be a very powerful figure because Miranda needed a power structure to grow into. A lot of fictional worlds have dealt with vampire society, but not that many go into it as if it were magical or even spiritual in nature – that there’s a greater purpose to it than “Let’s be rich and fabulous and eat people.”

To be honest I have no idea where the Signets themselves came from. The idea was just sort of there when it came time to write the story. As I considered the societal structure I thought the leaders needed to be obviously recognizable as leaders, so they needed a badge of office, and something in my mind wanted to know what would happen if that badge was more than just a badge – what if it had power of its own, and linked back to the creation of vampires as a race?

Do you see yourself in any of your characters?

I don’t think it’s possible to create a character without a bit of yourself in him or her. To write a believable, textured character you need to be able to get into their skin – even the really nasty bad guys – and if you do it right, you leave a piece of yourself there. I read a theory once that when you dream, every person in the dream represents an aspect of your personality. Writing is a lot like that.

You’re currently working on the fourth book in the series, Of Shadow Born (coming out in 2013). Without giving anything away, how have the characters evolved over the course of four books? Have you come to know the characters so that they’re easier to write as the series progresses? Are some easier than others? Do you have any favorites?

Miranda can actually be hard to write because I want her to stay, for lack of a better word, human, even while becoming this total badass. She’s growing into her power but she still makes really huge mistakes. Her relationship with David has had to endure some pretty massive blows, but I think David said in the first book that vampires at their level of influence can’t have quiet or safe lives. Also Miranda is starting to deal with the idea of being immortal – staying the same while everything around her dies is starting to affect her a little.

Then on the other hand you have Cora, who is also very strong but in a completely different way than Miranda – you don’t have to be a sword–wielding warrior princess to be strong. She has a traumatic background like Miranda does but she handles it very differently – she’s a gentle person, very compassionate, water to Miranda’s fire.

I have a lot of fun writing David and Deven’s relationship – here you have two exes who each have a mate they love very much but still can’t help loving each other. They play off each other really well – there’s always something new to fight about. Deven is a particularly interesting case because he’s 700 years old, so we’re never going to know his whole story. He could have been a lion tamer and a WWII fighter pilot for all we know.

Finally, which characters are more fun to write: humans or vampires?

Vampires are definitely more fun, but it’s a little challenging to write a story where almost all of the characters are vampires who live in their own society, have their own clubs, even their own tattoo parlors. In the first book Miranda was our surrogate coming into their world; we got to ride along with her as she learned all this stuff was real and just how complicated it was. Even though her life was hardly what you’d call normal, what with the creeping insanity and all, she still had that mortal vulnerability. And while she’s still the new kid on the block compared to everyone else, she’s removed from the human world. In the second book her friend Kat was the human element and she couldn’t deal with it at all. In Shadow’s Fall we meet Stella, who’s still in her early 20s but also already involved with the paranormal, so her relationship with the Shadow World is going to be totally different from either Kat’s or human Miranda’s. But Miranda has been trying to hold onto her human life, and it’s already slipping through her fingers because she’s never going to be an ordinary vampire – or an ordinary Queen.