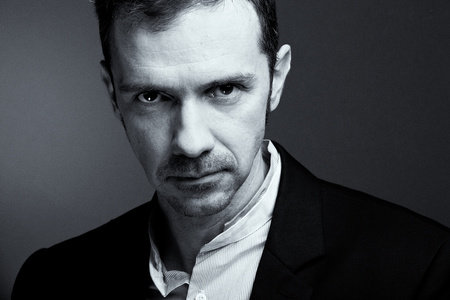 Franck Thilliez is the author of several bestselling novels in his native France, where he lives.

A Conversation with Franck Thilliez, author of Syndrome E

Where did the idea for Syndrome E come from? Did the orphans of Duplessis really exist?

I was researching the history of psychiatry for another book, and by chance, I came across the incredible story of the Canadian orphans of Duplessis, who, although completely sane, had been placed in psychiatric hospitals in the 1950s—for financial gain—to the hospitals.

As a result of being treated as mentally ill, many of the orphans became troubled and difficult teens and adults, who suffered from depression and other mental illness.

I built my detective story around this terrible incident that went on for years and years.

What is Syndrome E?

It is the transformation of groups of previously non-violent individuals (usually men) into murderers. Symptoms include acts of violence, obsession with a set of aggressive beliefs (often directed against a minority group), desensitization to violence, and an extremely hostile group think.

Your two main characters who lead the investigation, are very different. What were the challenges in creating them as a collaborative pair?

It was not easy. Franck Sharko is a high-ranking inspector, who works in one of the most famous police departments in Paris. He is about 50 years old, and not very open to others, since he lost his wife and daughter in a terrible accident. Lucie Hennebelle, is a single mother with twin daughters, who is a lower-ranking official, in a more obscure police department.

Both are smart and work hard, sometimes too hard. Franck is much more experienced than Lucie, and, at first, it is difficult for him to realize that someone like her could have valuable insight into a crime. They couldn’t be more different from one another, and bringing them together created real drama and tension.

One of the major themes in your book is the power of images—the ones we are aware of, and the ones that hit our brains without us even knowing it. With that in mind, do you think that we ever have true freedom of choice, or are we always influenced in some way?

Many studies have been done about subliminal imaging, where a flicker of an image—one of such short duration that your conscious mind doesn’t even register what it has seen—is perceived by your brain.

From the 1950s onward, the secret services of both the Soviet Union and the United States have conducted research to see if the mind could be controlled. For example, they forced subjects to watch violent images for hours or days to determine how they would react as a result of these stimuli. Some of the researchers were indeed persuaded that so-called “brainwashing” was possible.

Although we might be tempted to think that such experiments are no longer being conducted, just look at the concept of “neuromarketing,” where advertisers study the impact of advertising on the brains of consumers, and tailor their ads so that consumers are strongly persuaded to buy products or services. Isn’t this really an attempt to control people’s minds?

Your novel isn’t just a thriller . . . it’s a glimpse of a bit of little-known history. Do you think that a thriller can open the eyes of the reader?

In a way. I think the engine of all crime novels is failure—be it social, political, or even neurological. Of course using this failure as a starting point gives the author the permission to express himself on subjects that are important to him. Not all authors have the same sensibilities and interests, of course. That is what creates the extraordinary diversity in the thriller genre.

It seems to me that a good thriller has a good story with strong and memorable characters. I would also say that the novel should constantly ask the reader questions, even as it entertains. If a reader leaves the book with the feeling of having had a great time of anguish and questioning our society, then I, as the author, have done my job well.

The power of subliminal images in the movies has been a much debated subject for decades. Why did you decide to write this?

There are two main reasons: First of all, I am fascinated with learning how the brain works. How does this fantastic organ transform the signals it receives into coherent messages. How does memory work? How does mental illness appear? Today, we live in a world where images—particularly violent images—are everywhere. They are on TV, the Internet, and on video games. Even young children have access to them. So I thought that it was important to deal with this aspect of violence in the book. And it is more impressive and more dangerous if those images are hidden inside other images which are not particularly violent. Subliminal film was the perfect way to prove my point.

The second reason I liked the idea of subliminal messaging, is that I thought it was an original way to begin a book. Think of it—a strange, anonymous film makes a viewer go inexplicably blind! I thought that idea had great dramatic possibilities.

Are there any historical facts in this novel? If so, how did you discover them?

In addition to the governmental experimentation that went on in the 1950s, there are many other historical and scientific facts that are part of the novel, like the orphans of Duplessis.

The issues around which I built the novel are so strange and nearly incredible, that some readers cannot believe that they are true. They are very surprised when I tell them that about 80% of the novel is based on fact!

My historical research can take up to two to three months, plus three more months just to understand what I have uncovered. In a prior book, about mental illness, I researched psychiatry in both documents and books. That is when I discovered the awful things that happened to those children in Canada. I put the research in the back of my head, to save it for a future novel. Syndrome E is that novel.

Is science and the dark side of science generally a source of ideas for you?

Absolutely. I love science. I studied physics, chemistry, and math in school. I really think that science is making wonderful advances all the time that will truly benefit humanity. But we must be very careful, too, because science can be dangerous in the wrong hands. I am particularly concerned about cloning and the possibility of genetic mutations.

For me, science is a double-edged sword that can be explored in thrillers. In my novels, I try to understand, in a scientific way, how someone could kill another person. I wonder what happens in the brain when a person commits a murder. What is behind the most violent act that one person can do to another.

How did you start writing?

When I was younger, I was a huge fan of the films, Seven and The Silence of the Lambs, as well has the films of Alfred Hitchcock, and anything with vampires in it. I also read many Stephen King books. When I was 29, I came up with an idea that was a mix of imagination, film and book influences, and scary images. I became so obsessed, that I knew I had to write it. So I sat down at my computer and began to write my first novel. That was nine years ago.

Tell us a little about your writing process.

When I was working a nine-to-five job, I wrote whenever I had the time, usually nights, weekends, and holidays. Which was difficult. But about four years ago, I quit my job as an engineer, and began writing full-time. I keep the same hours I had then, getting up at 8:00 in the morning, and working until about 5:00 p.m., Monday through Friday.

It takes me about one year to write a novel. I outline the plot in three to four months, do three months of research, which means interviewing experts, policemen, and doctors. By that time, I know exactly where I am going with the story. And then I do about four months of pure writing.

The end of Syndrome E is also a cliffhanger. Have you already written the sequel? And if so, when will be able to read it in the U.S?

Yes, I have written the sequel. It has already been published in France, and it is called, Gataca. The French title refers to the way that DNA is sequenced. It is also a story about violence, but this time, I am pulling the far reaches of time into today, and asking how is violence inherited from humans living 20,000 years ago? Is violence genetic or cultural? And, is violence necessary to survive?