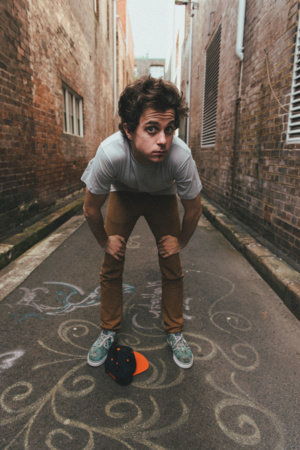 George Watsky is a writer and musician from San Francisco, California. After getting his start as a teenager in competitive poetry slam, winning both the Youth Speaks Slam and Brave New Voices National Poetry Slam at the Apollo Theater, he has since branched out into hip hop and long-form writing. Watsky has performed on HBO’s Russell Simmons Presents Def Poetry, the Ellen Show, the NAACP Image Awards, and his online videos have received hundreds of millions of YouTube hits. A committed live performer, he’s played hundreds of shows, both with his band and solo, across the North America, Europe, Australia, and India, including festival slots at San Francisco’s Outside Lands, Just for Laughs in Montreal, Rock the Bells, Soundset, Warped Tour, and released numerous music albums and mixtapes, including his most recent projects, 2013’s “Cardboard Castles” and 2014’s “All You Can Do.” He graduated from Emerson College with a degree in acting and dramatic writing, where he received the Rod Parker playwriting fellowship, and released a poetry collection, “Undisputed Backtalk Champion,” on First Word Press way back in 2006. And although he was forced to write a lot essays in school, he considers this his first attempt at prose.

How to Ruin Everything