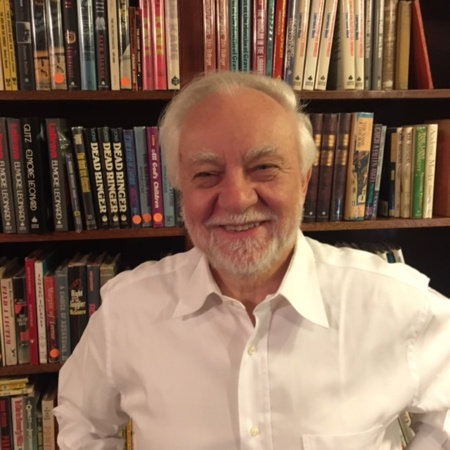 Otto Penzler, proprietor of The Mysterious Bookshop in New York City, founded The Mysterious Press in 1975, now an imprint at Grove/Atlantic, and publishes classic crime fiction through MysteriousPress.com. Penzler has won two Edgar Awards, MWA’s Ellery Queen Award and the Raven. He has been given Lifetime Achievement awards by Noircon and The Strand Magazine. His new company, Penzler Publishers, launched its imprint American Mystery Classics in October 2018; it is devoted to reissuing classic American mysteries in hardcover and paperback.

The Big Book of Victorian Mysteries

The Big Book of Espionage

The Big Book of Jack the Ripper

When it comes to mystery fiction, Otto Penzler wears a lot of hats. He’s the owner of the Mysterious Bookshop, the country’s oldest mystery specialist bookstore, the founder of independent publishing house Mysterious Press, and a celebrated anthologist with several successful collections to his credit, including The Black Lizard Big Book of Pulps and The Black Lizard Big Book of Adventure.

Penzler’s latest anthology is The Black Lizard Big Book of Locked-Room Mysteries, a collection of brain-teasing tales of seemingly impossible crimes from Ellery Queen, Dashiell Hammett, and many others.

We recently spoke with Penzler about the accidental beginnings of his career, his childhood love of adventure stories, and how an anthology should be like an invitation to a really good party.

Biogaphile: How did you get started with mysteries? What do you find attractive about the genre? Did you enjoy them as a child?

Otto Penzler: As a child, I didn’t read mysteries. I only started reading mysteries after college. I liked it. I had been reading the kind of things that you read when you’re an English major: James Joyce, Herman Melville, Russian novelists, T.S. Elliot, and when I moved back to New York after school, I just wanted to read for pleasure. I thought that I would start reading some mysteries: you know, something light, something really easy. I then read some Dashiell Hammett and Raymond Chandler and thought to myself, “Wait a minute. This is some serious literature!”

I really fell in love with it, and I also started collecting books really early; in my early twenties. The mystery world was not collected in those days, so I had plenty of opportunities to buy good books for very little money. I got to where I had a really nice little library of mysteries that I enjoyed reading. I had a regular job, and I wasn’t running my own companies, so I was reading a lot. I probably read four or five books a week in the mystery field.

A friend asked me to co-write with him a book which became the Encyclopedia of Mystery and Detection, and then somehow at that point I was recognized as an expert because I had written an encyclopedia.

One thing led to another, and I started my own little publishing company, The Mysterious Press. I worked out of my apartment in the Bronx. I couldn’t keep up because I was actually selling some books, and I needed some help. I couldn’t exactly call up a secretarial service and say, “Send a girl to my apartment in the Bronx,” so I started looking for a place in Manhattan. I just wanted one extra room so I could get some help. I couldn’t afford the rents, and I ended up taking my life’s saving, which was about $2,000, and going in with a partner to buy a building in midtown. This was in 1978, and the real estate market was going bankrupt. People were dying to get out of the city. They were being taxed to death.

Once I had the building, I thought to myself, “Gee, look at all of this space. Wouldn’t it be fun to have a bookshop?” That’s when I started the Mysterious Bookshop.

So that’s how it started. A lot of this was accidental: There was no grand plan to devote my life to mystery fiction. I started reading and collecting, and then I wrote about it, and then I started a company. You know, it just sort of snowballed.

PRH:You’ve edited several anthologies, although “several” is actually an understatement.  How many have you done?

PRH:You’ve also published a lot of material that has never been published before in the United States.

OP: Oh, of course. I’ve been publishing since 1976, and have continued to do so all the way through until now, so there have been hundreds and hundreds of books.

PRH:What are some of your favorite acquisitions as a publisher?

Now I publish Joyce Carol Oates, which is an honor, and Pulitzer-Prize Winner Robert Olen Butler, and maybe one of my favorite writers of all time, Thomas H. Cook. There are so many. I’ve been doing this for almost 40 years now, and it’s hard to remember everybody. Were I to list everyone I published, you would fill a small book.

PRH:Your latest anthology, Locked-Room Mysteries isn’t exactly a small book. What can you tell me about it?

When I was reading a lot of detective fiction for the sheer joy of it, I loved locked-room mysteries. I love magic, magicians, stage illusions, and close up magic, and locked-room mysteries are like magic tricks. They seem impossible: How can someone be bludgeoned to death in the middle of a tennis court that is cleanly raked all around it? These were so gripping. I love reading locked-room mysteries and “impossible” crimes. I’ve had very good success. Random House Vintage has been commissioning these big anthologies from me for the last eight or nine years. I do one every year.

PRH:I look at a list of your anthologies and see an astounding amount of diversity of subject from someone largely associated with crime, mystery, and detective stories. I see zombies, vampires, Christmas tales, ghost stories, adventure stories. Can you talk about some of these?

OP: Doing the adventure book was great. I loved doing that. it brought me back to my childhood reading: H. Rider Haggard, and all of the stuff you get to read about pirates, and spaceships, and everything that’s adventurous and exciting, so that was fun.

The Black Lizard Big Book of Pulps was very successful. In fact, it made the extended New York Times Bestseller list for a couple of weeks. My editor asked what we could next, and I didn’t really know. I suggested horror or supernatural, because I did read a lot of ghost stories in my time, and he suggested vampires.

Vampires were everywhere at the time because of the Twilight series. I agreed, and while I knew of some vampire stories already, I still had  to do some research. I really enjoyed it once I got into it. I wouldn’t have chosen it, but there was really serious literature in vampire fiction.

With zombies, I had to stretch the definition a little bit. I didn’t want it to include only what’s being written today — flesh-eating, brain-eating, stuff that’s very violent and very gory. I went back to the 19th century and defined zombies as anyone who had died and come back to life.

PRH:How often do you get a chance to introduce people to something new that they may not have known about. Is that something you think about a lot as an anthologist?

OP: It is. I love anthologies myself and read lots of them. I’ve always likened an anthology to going to a good party where you see a lot of friends that you know and like, but you also meet new people. That’s what an anthology will do if you do it right, so people will enjoy reading another Sherlock Holmes or Agatha Christie story that they like and remember enjoying from other times, but also introduce them to a story that they’ve never heard of by an author that they’ve never heard of that they’ll enjoy too. I love that element of it.

PRH:What do you think that readers will enjoy most about Locked-Room Mysteries?

OP: What I think that readers will like is the range of writers, from as early as Wilkie Collins and Edgar Allen Poe, to contemporary authors, plus a few that they may not know like Stanley Ellin, one of the great short story writers. He’s not exactly a household name, so I like that I’m bringing that back in.

My collection is almost 60,000 volumes of first-edition mystery fiction, so it includes lots of rare books; really almost unknown books. I went into them and brought some stories to light that even a lot of mystery aficionados and experts may have never read. I think that’s really cool.

OP: I’m working on The Black Lizard Big Book of Sherlock Holmes stories. I’m almost finished with clearing rights and getting permissions, and it looks like it’s going to have about eighty stories. This is really going to be a fabulous book.