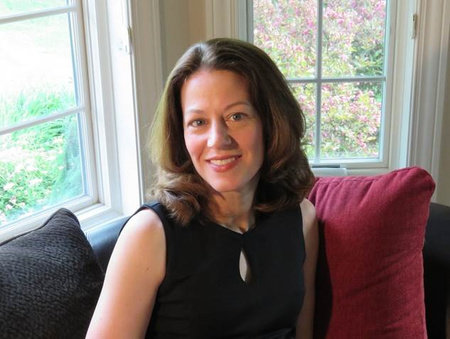 Jennifer Chiaverini is the New York Times bestselling author of Mrs. Lincoln’s Dressmaker, Fates and Traitors, Enchantress of Numbers, and other acclaimed works of historical fiction, as well as the beloved Elm Creek Quilts series. She lives with her husband and two sons in Madison, Wisconsin.

The Spymistress reveals the story of an almost forgotten yet pivotal woman in American history, Elizabeth “Lizzie” Van Lew. How did you first encounter Lizzie Van Lew’s story?

I first discovered this remarkable woman while researching an earlier historical novel, The Union Quilters. One of my characters, a regimental surgeon in the Union army, was captured at Gettysburg, and when I investigated where he likely would have been taken, all paths led to Richmond and to Libby Prison. Every account I read of that notorious prison mentioned Elizabeth Van Lew and the astonishing, audacious risks she took on behalf of the Union captives there, and I was compelled to include her in The Union Quilters as a minor but very significant character. Even as I wrote her chapter, I was convinced that she was so remarkable, so heroic, that she really deserved an entire book of her own. I’ve wanted to write her story ever since.

Through your rich, descriptive writing, readers can really picture Elizabeth Van Lew’s daily life and relive her experiences. What kind of research did you do to so effectively put yourself in her shoes?

I relied upon numerous memoirs and journals written by Richmond civilians and Union prisoners of war, as well as newspaper reports and official documents from the National Archives. My first and best resource, however, was Elizabeth Van Lew’s “Occasional Journal,” an intermittent diary and scrapbook she kept of her wartime experiences. It was really more of a collection of loose papers than a complete, bound volume, but it was incredibly dangerous for a spy to keep any detailed record of her illicit activities at all. During the war, Van Lew would hide most of her journal and keep certain incriminating pages by her bedside in case the house was raided during the night and she had to burn them. After the war, Van Lew declined an offer to publish a memoir, believing with good reason that doing so would further provoke the anger of her Richmond neighbors, many of whom still resented her for her wartime support of the Union. Instead she hid the manuscript away for many years, revealing its location only upon her deathbed. When the box was brought to her, she examined it and exclaimed, “Why, there is nearly twice as much more. What has become of it?” The missing pages, if they truly existed, have never been found, but what remains offers a fascinating if incomplete glimpse into Elizabeth Van Lew’s remarkable wartime adventures.

In Mrs. Lincoln’s Dressmaker, you illuminated the friendship between First Lady Mary Todd Lincoln and Elizabeth Keckley, her most trusted confidante and friend. The Spymistress paints the picture of the Confederate capital, Richmond, Virginia, during the same time period. What was it like researching and writing from the opposing side of the war?

I wouldn’t say that I wrote from the opposing side of the war, because Lizzie was staunchly loyal to the United States, and so even though the story takes place in the South, I still wrote from a Unionist perspective. After coming to know wartime Washington, D. C. so thoroughly for Mrs. Lincoln’s Dressmaker, it was fascinating to examine the Confederate capital, and to find significant differences as well as striking similarities in the experiences of their residents. It was especially intriguing to study the political heart of the Confederacy from the perspective of Elizabeth Van Lew, a proud native Virginian and well-established member of the Richmond social elite who, upon secession, suddenly found herself in the unsettling position of political outsider, surrounded by friends and neighbors she believed had gone utterly, disastrously mad.

Elizabeth Van Lew cared for Union prisoners, orchestrated escapes from the Confederate Libby Prison, and helped construct the Richmond Underground. What did you think was the most surprising and daring of her plots?

Smuggling information in and out of the prisons certainly put her in danger almost daily, and she risked exposing her entire operation every time she bribed a clerk or attempted to recruit a Confederate officer, but if I have to choose, I would say that sheltering fugitive prisoners in her own home was her most daring action. If her house had been raided and the prisoners discovered, not even clever, quick-thinking Lizzie could have explained away evidence that incriminating.

Can you discuss some of the methods of espionage Elizabeth Van Lew employed? What were some of the ways being a woman made it more difficult, or perhaps easier, for her to successfully run a spy ring?

Elizabeth Van Lew’s methods for smuggling intelligence to the Union Army were widely varied and ingenious. She would enclose tiny scrolls of encrypted information inside a hollow eggshell, which she would hide in plain sight in a basket of fresh eggs. Her servants carried folded documents in the thick soles of their shoes, or wrote coded messages in the margins of dressmaker’s patterns, and carried them safely past unwitting Confederate pickets. Numerous clerks within the Confederate government were on Van Lew’s payroll, and they kept her well supplied with essential information about military and political operations. She also managed to place trusted allies in important positions within the prison system and the railroad, where they passed along intelligence and generally did whatever they secretly could to thwart the Confederate operations. Van Lew performed the role of loyal Confederate lady exceptionally well, and convinced nearly everyone that her acts of generosity and concern for Union prisoners of war were merely the fulfillment of her duties as a good Christian woman. She wisely took advantage of the Confederate authorities’ refusal to believe that an elite Southern lady could be a dangerous Union spy.

The astonishing scope of Lizzie’s achievements has never been widely known. What do you hope readers take away from the novel?

Readers familiar with Elizabeth Van Lew may wonder why I don’t refer to her as “Crazy Bet,” as the vast majority of authors who have written about her have done, or why I haven’t portrayed her feigning mental impairment to divert suspicion. I made this choice because nothing in the historical record during the Civil War and its aftermath supports this characterization—not her wartime “Occasional Journal,” nor the memoirs of the Union soldiers she assisted, nor even the writings of her numerous critics. The concept that Elizabeth Van Lew succeeded in her espionage work because of her ability to disarm her enemies by acting daft first appeared in a Harper’s Monthly article published in 1911, written eleven years after her death by someone who had never met her. The author was heavily influenced by a man who had met Elizabeth Van Lew after Reconstruction, when she was in her late sixties and age, poverty, political troubles, personal heartbreak, and isolation had taken their toll. Unfortunately, the “Crazy Bet” myth has long overshadowed the truth about Elizabeth Van Lew’s intelligent, deliberate, and dangerous espionage work, but I hope my novel will help correct that misunderstanding.

In both of your stand-alone novels, you chronicled the lives of women who had a significant impact on history that many people were not aware of. Can you give us a preview of what the January 2014 release, Mrs. Lincoln’s Rival, will reveal?

Mrs. Lincoln’s Rival is the story of Kate Chase Sprague, the daughter of President Lincoln’s Secretary of the Treasury, Salmon P. Chase. Beautiful, intelligent, and entrancing, Kate served as her thrice-widowed father’s official hostess and was his partner in his driving ambition to become president. Soon after they met, Mary Lincoln recognized in Kate her strongest challenger for the role of most prominent woman in Washington society, and an intense rivalry was born. Unfortunately, although Kate and Mary held much in common—political acumen, love of country, and a resolute determination to help the men they loved achieve greatness—they could never be friends, for they believed that the success of one could come only at the expense of the other.