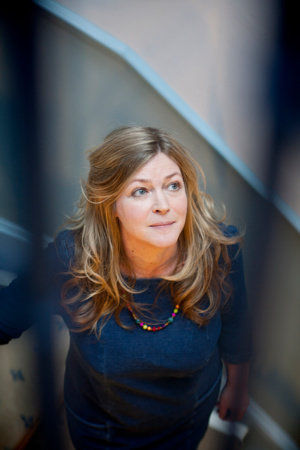 Kate Summerscale lives in London. She attended Oxford and Stanford universities and then worked at the Independent and the Daily Telegraph, where she was obituaries editor from 1995 to 1996. She is currently the editor of the Independent on Sunday Review.

The Book of Phobias and Manias

The Haunting of Alma Fielding

In the summer of 1895, in the rapidly growing working-class district of West Ham near the industrial ship docks of East London, a murder took place.

Emily Coombes, a mother of two pre-teen boys was found dead in her room on the second floor of her family home, while her husband was away at work and her sons had been left in her care. Her body had been left in the summer heat for days, so badly decomposed that passersby and delivery-men complained of a strange smell, and “a black cloud of blowflies hovered at the upstairs window.” The two Coombes boys — twelve-year-old Nattie and thirteen-year-old Robert, who had spent the past few days traveling to St John’s Wood to watch famed cricket player W. G. Grace; visiting pawnbrokers, items like a watch and violin in hand; and going fishing — were quickly considered suspects.

In the trial that followed, as detailed in The Wicked Boy by Kate Summerscale, Nattie would appear only as a witness. Robert, however, admitted to stabbing his mother, and he was convicted and sent not to jail, but to Broadmoor, 19th-century England’s well-known asylum for the criminally insane.

What comes through as Summerscale investigates, is a story far more complex than that of a “wicked boy” coldly murdering his mother. After his release from Broadmoor, Robert would set sail for Australia, then serve in World War I as one of his adopted country’s decorated stretcher-bearers, men who raced into combat zones to carry wounded soldiers out to safety. He would live the rest of his days in the Australian bush and become entwined there with another family, who never knew of his past deeds.

His life retold by Summerscale is a fascinating tale of children’s literature of the day, social upheaval based on upper-class fear of the new industrial age’s rising working classes, and an evolving understanding of the various stages of child development and the effects of environment and home life, all notions that are still under debate today.

Below, we talk to Summerscale about why she pursued Robert’s story and what she found.

PENGUIN RANDOM HOUSE: You write that you became intrigued by Robert’s story when you came across an article about his arrest. What were the things you wondered about him then?

KATE SUMMERSCALE: When I first read about it, the first thing that struck me was the strange story about how Robert and his brother Nattie had spent the ten days after the murder of his mother. The two of them coolly went out to watch cricket at Lord’s and to the seaside and lived at the house with her body, and it seemed an eerie and strange condition they were in. I pictured it as a mix of knowing what they had done and not quite believing it.

I found it rather beguiling, this spooky image of them, and it drew me in like a scene I was seeing. I was intrigued by the psychology of the boys, and how they felt during those days, and also why they killed their mother. Robert struck me, his coolness his callousness, his cunning, the way he was coming up with all these scans to get money, as someone with something else going on. But he was also very innocent. They just stayed at home, he didn’t run away, as his mother’s body started to rot and decompose and stink upstairs. I wanted to know what had operated on him to get him to behave that way. And I wanted to continue to see what became of the case, how it was tried and beyond.

PRH: You write the notion of “adolescence” wasn’t identified as a distinct developmental phase until 1904, about ten years after Robert murdered his mother. What were the ideas about thirteen-year-old boys in Robert’s time?

KS: There wasn’t really a separate category for adolescents and teenagers in the 1890s. They were considered children until they were eighteen, when they would be considered adults under the law, though there was much more of a spectrum in reality.

Whereas earlier, childhood had been constructed as a time of innocence and purity, it was much darker in the later 1800s, there was writing about children being animals or savages. These ideas were played out in Robert’s trial and cheered on by the press. There was a wide range of opinions with the medics, some of whom saw Robert as a degenerate, but there were also some in the emerging field of child psychology who thought maybe children didn’t know the difference between right and wrong and life and death and shouldn’t be judged in adult terms at all.

The key to this was Charles Darwin’s theories, in which he traced a line of development and evolution among various species, and on the premise that animals could evolve. It was speculated by the end of the 19th century that they could degenerate back to earlier forms, and it was feared that urban and working classes in particular could. Robert as a working-class boy from East London would have been thought of as someone physically and psychologically tainted, inherently corrupt. When the papers described him they attributed the features, like a looming brow and bulging eyes, of what was thought of as criminal. There was the idea that people could physically be identified as criminals, a sort of precursor to eugenics.

PRH: Books play a key role in your story, both penny dreadfuls — what might now be considered pulp fiction — and now-classics like Robert Louis Stevenson’s Treasure Island, which you note Arthur Conan Doyle called the beginning of the “modern masculine novel.” What sort of influence were these books thought to be?

KS: I was very struck when I read many of the penny dreadful stories that had been found in Robert Coombes’s house — they’re hard to find because they’re pretty obscure documents, but I found some of them. I was struck with many parts of them that did seem to chime with his murder plans: treasure, pirates, islands, and travel to far-flung lands, also I noticed a great many instances of the quality of coolness, a masculine capacity to not show emotion; a macho, implacable, callous nature.

This quality was ascribed to villains in the stories but also to heroes and adventurers, and it struck me that it was very much how Robert behaved after the crime, a seeming lack of feeling of which I was quite suspicious. I didn’t really believe he didn’t feel anything, I felt that the crime came from an excess of feeling, not a lack of feeling, and I wanted to investigate that: an excess of masculinity and the shapes it takes and his aspiration to be a kind of man who didn’t feel.

PRH: Adolescence, the industrial age, easy access to books, fiction that would these days be called YA…how does it all intersect?

KS: Robert Coombes was a very able student and he and his brother were among the first wave of boys educated at the expense of the state. There was a great anxiety at the time about the effects of education and literacy on the young of the working class. The boys were reading exciting books which were about escape, romance, aspiration, adventure, and teaching all these children to read carried dangers with it. So this was to me a very key part to the story: the way in which this was a very panicky social moment, and many papers seemed eager to attribute this crime to the fact that he read trashy literature. It’s an idea that hasn’t really gone away: when young people commit shocking crimes today, we point the finger to popular culture. It takes the focus away from the socioeconomic problems, and the domestic situation, but it’s also worth exploring, which is why I went to the trouble of finding the specific things he read rather than rely on the generalization of those kind of books.

The family was in fact from the more respectable, aspirational end of the working class. Their part of East London was different. It was the modern sprawl of many new homes all very close together, all for laborers, all for the working classes. There was a sense of the amorphous mass of the working class, which may have fed into not only the commentators views, but also from Robert’s own sense of his own plans, his own future. He was a musical boy, very respected and very loved by his teachers, and he’d had to leave school to go to work in this very brutal workplace, this new industrial environment which may have been very oppressive to a boy like him, and he would have seen the ships at the docks every day. So the adventure and escape of the ships he could see contrasted with this other life mapped out for him may have played a part in his crisis.

PRH: Do you see Robert differently now than when you first came across his story in 2012? And if so, in what ways?

KS: I did feel that by reading the stories that he read it gave me some kind of insight into his world and the imagination of boys of his time and the stories that might have entertained and inspired them.

The main thing though that transformed my understanding of him was what he did in the later part of his life. That gave me the strongest clues to why he committed the crime and whether he was as wicked or sick as people assumed in 1895. I started with maybe there was more to this boy who people assumed was psychopathic, and I found out much more about him than I had anticipated, and I felt much closer to understanding his situation in 1895 by discovering what happened to him during the First World War and afterwards.

The man that I heard described living in Australia in the 20th century was a very self-contained, kind, and honorable man. I’d say he was a good man.