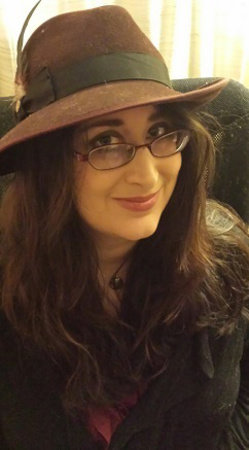 Lauren M. Roy started out as an independent bookseller, moved on to Hachette Book Group (where she has been a telephone sales representative for ten years), and is now completing her bookselling hat trick as an author. She has done some freelance writing for tabletop role-playing games, including Dragon Age, Trail of Cthulhu, and A Song of Ice and Fire Roleplaying. Lauren lives in southeastern Massachusetts with her husband, their cats, and the ghosts of houseplants she forgets to water. She is a graduate of Viable Paradise, the science fiction and fantasy writers’ workshop. Night Owls was her first novel.

Sign me up for news about Lauren M. Roy and more from Penguin Random House

How did you first come up with the premise of Night Owls?

Night Owls was originally two different, unrelated stories: Val and Chaz in the bookstore, and Elly running from a monster. The former was always going to be a novel, and the bookstore setting was absolutely informed by my own experiences working in at an independent bookstore throughout high school and college. I had that first scene with Chaz debunking the poor lovestruck kid’s “my girlfriend is a vampire” theory, and wanted to run with it.

Elly’s tale was supposed to be a short story, until I realized maybe the same monster chasing her was also the one that came in to threaten Val and Chaz. That was when the plot clicked for me. So many pieces fell into place.

Night Owls is different from much urban fantasy because of the horror elements and the ensemble cast. What books and movies have influenced you the most?

You know how sometimes, you’re so close to a project that you don’t see certain really neat connections until someone else points them out? This was one of them. Horror was my first love — I was reading Stephen King in elementary school, and my mother kept waiting for the school to call and ask what kind of parents they were, letting their daughter read that stuff. So when I say my biggest influence was probably The Stand, that might explain a lot. Talk about ensemble casts! The other thing I love so much about that book is, it’s so focused on the characters. Sure, you’ve got the plague and its aftermath and Randall Flagg being evil incarnate, but Nick and Frannie and Larry and Tom Cullen and and and… who they are, and who their circumstances shape them into, *that’s* what the story is about. Even my favorite shows tend to have lots of main characters: Firefly, Battlestar Galactica, Community, Game of Thrones (and the books have even more POV characters!) and of course, Buffy.

There are a couple of really funny scenes that happen in the bookstore. Were these scenes based off of your own experiences in working in bookstores?

Oh my, yes. Being asked “I was in here last week, and there was a book. I forget the title and author, but it had a blue cover. Do you have it?” is a universal bookseller question. Blue Willow Bookshop recently made a display of books with blue covers. I shared it with all my bookstore friends, and every one got it.

You’re quite a gamer. Did your gaming experiences contribute to your writing?

Video games teach you a lot about pacing, atmosphere, and reveals. The ones I like best leave the clues there for you to piece together without putting a blinking light over them. So when you get to the big OH MY GOD revelation, you can look back and see how the writers were leading the story up to that point.

Pen and paper RPGs taught me about characters and motivation. You really have to learn what your players want, and how their characters will react in a given situation. If I want them to go into the Factory of Death, they’re not going to waltz in there just because I said so. In fact, some of them are going to dig in their heels and book a flight out of the country to avoid it. Because they’re smart and don’t want to get hurt! As a storyteller, I have to figure out what WILL get them in there, and how to present it so they either come around to that idea themselves or at least cancel their plane tickets and listen to their companions. That’s how I learned to make sure the characters’ actions in my writing match up with what the reader has seen them do and think. If I push them into something that makes no sense for their personality, readers are going to know it, and call me on it.

It also taught me how to think my way out of sticky plot points. Tell your PCs (player characters) that the hallway ends in three doors, and they need to pick one to go through, and I guarantee you someone’s going to propose blowing a hole in the wall. Storytellers need to be prepared for those situations. When I get stuck, I ask myself what my characters would do if this were an RPG.

Each of the characters in Night Owls have their own issues and quirks. Which do you think would make the best roommate?

I have to go with Val. She’s neat, quiet during the day and not home most of the night, doesn’t take up a lot of space in the fridge, and never leaves dirty dishes in the sink.

Now that Night Owls is out in the world, what would you say was your favorite part of the writing process?

Once upon a time, I didn’t like writing dialogue. I was afraid it was too stilted, or as-you-know-Bob, or boring. I’ve gotten over that, and now on occasion I’ll just let the characters banter. Plenty of it gets cut before it even gets from my head to the page, but it’s fun for me to wind ’em up and watch ’em go. Especially Chaz and Cavale, who sort of love to hate one another. *grin*