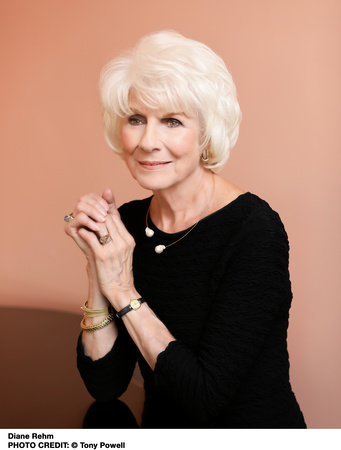 Diane Rehm hosted The Diane Rehm Show, distributed by NPR, from 1979 to 2016, when it had a listening audience of nearly three million. She now hosts the podcast On MyMind and The Diane Rehm Book Club for WAMU/NPR. She lives in Washington, D.C. www.dianerehm.org

For nearly four decades, Diane Rehm’s unmistakable, “gravelly, breaking” voice has informed and entertained listeners of Washington DC’s Diane Rehm Show from the hours of ten to noon. To many listeners, Rehm is the epitome of the public radio host — warm, thoughtful, astute, dignified. But for even longer than she’s been on the air, she’s been a wife, to husband John Rehm, whom she met when she was a secretary in the State Department. When John died in 2014 of Parkinson’s, Rehm was devastated, and had to figure out how to face life as a widow, living, as she titles her new memoir, On My Own.

Part of what made the transition so wrenching was John’s labored death from Parkinson’s, and his decision to starve himself to death when his suffering became severe. Inspired and angered by her husband’s experience, Rehm became an advocate for the right to die movement, and, a year after John’s death, announced her decision to retire from radio. The change will give her the time and autonomy to pursue her activism more fully, though, she says, she’s still not certain what form her advocacy will take. But her book, which combines candid reflections of her life with her husband and her grief over his death with arguments for the right of terminally ill patients to end their lives, is the first step.

She spoke with Penguin Random House about writing the book, and what comes next.

PENGUIN RANDOM HOUSE: Parts of On My Own feel very diaristic. Did this book start as a diary? At what point did you decide to publish it?

DIANE REHM: The night John was dying, and I was lying in his room on two chairs, of course I couldn’t sleep. I had my iPad with me. I got off the chairs at 2 a.m. and wrote a few sentences, expressing the awful reality I was witnessing. That, I believe, was the beginning… not so much a diary but rather a reflection of a wife standing by while her husband of fifty-four years was gliding away into what would come next. I called my editor, Bob Gottlieb, several months after John had died, and asked whether he thought my idea of a small book talking both about grief and the right to die might be worthwhile. I wrote a paragraph to him outlining my ideas. He then took that paragraph to Sonny Mehta, head of Knopf, who gave his approval, and we then moved forward.

PRH: You quote Joan Didion, whose Year of Magical Thinking is similar to your book in some ways. Didion has written about intimate aspects of her life for her whole career, while you have made a career of talking to other people about their lives. Was it difficult to be so confessional and vulnerable in your book?

DR: It was — and is — more important to me to be honest about our marriage. The expectations of perfection must be balanced with the reality of how difficult the union of two people can be. John and I were always honest about how the tough times nearly finished us as a couple. We wrote candidly about many of those times in our 2002 book, Toward Commitment. Every difference of thought, behavior, and action can affect how two people feel about each other and their life together. So, to directly answer your question: It was both difficult and important to be confessional and vulnerable, because I needed to be honest.

PRH: Throughout the book you advocate strongly for terminally ill patients to be able to choose the time and manner of their deaths. Was that your intention when you began writing, or did you find new conviction in the process of writing about your and John’s experience?

DR: The conviction I felt about choice in dying began long before John was stricken with Parkinson’s. We both felt that the choice belonged to each of us as individuals. Watching him through that agonizing ten days underscored my intense belief that: one, he should not have to endure that prolonged suffering, and, two, I would do all I could to speak out about my own — and his — belief that we should have the right to choose how and when we die, if we know that life is drawing to an end.

PRH: On My Own is a tribute to your husband, but you write critically at times about your marriage and your sense of isolation. Did your view of your marriage change as you examined it through writing this book? Was there anything you hesitated to write about?

DR: Looking back, as I said to John while he was in his last days, I wish we had not wasted so much time in anger and isolation. I wish we could have found a way to understand each other, to forgive each other, and to be more gentle with each other. The fact that he said to me, in the last few days before he stopped eating and drinking, that he had ‘deliberately emotionally abused me,’ explained so much to me. I felt it. I knew it. But there was nothing about his behavior that I could change. It was only he — during those last days — who decided to ‘come clean’ about what was happening within him. Of course my own behavior could have been more mature in reacting to his hurtful actions, but it was what it was. I wrote both about the beauty and about the dark side. I wrote about the two of us as flawed human beings.

PRH: After John died, you talked to friends who had lost spouses and attended one session of a grief support group. Do you have any advice for the newly widowed? Is there anything friends can do to help someone who has recently lost a spouse?

DR: Since John died I’ve met a number of women who’ve lost their husbands, a number whose husbands have had Parkinson’s or Alzheimer’s, and one whose husband committed suicide. In each case I’ve encouraged them to talk about their experiences, and in several cases, I’ve invited them to come to my apartment. We’ve established friendships in those cases, important to both them and me. We console each other. And that’s what I would say to friends of those who’ve lost a loved one: console, listen, and offer a good hug.

PRH: On My Own is a goodbye to your husband, but also to your long career in radio, and you end the book preparing to transition to a new life. What will be the hardest thing about not being on the air anymore?

DR: I have enjoyed such a rich life as a broadcaster. What I will miss most is, first, the daily interaction with the fabulous women who are the producers of the Diane Rehm Show. They are all so smart, dedicated, creative, and supportive. I will miss the conversations with wonderful and informative guests who have given me the equivalent of a graduate education. I will miss the interaction with the listeners, who are so smart and attentive. They always add a dimension to each and every conversation. But I will be, as I always have, looking forward to whatever comes next.

PRH: At the end of the book you write, “For fifty-four years I have been a wife. Now I am a widow. Am I someone new?” Have you come up with an answer to this question?

DR: No, not completely. I believe I am still evolving toward a full understanding of what it means to be a widow. I will wear my wedding ring forever. That does not mean I refuse to let go. It does serve as a reminder of all that John gave me, despite our difficulties. Am I someone new? I believe that John’s suffering has made me more humble as a human being. He showed such courage, right to the end. His decision informs my life going forward. I will work harder to help others, and in every way I can, honor his life and his decision to die.