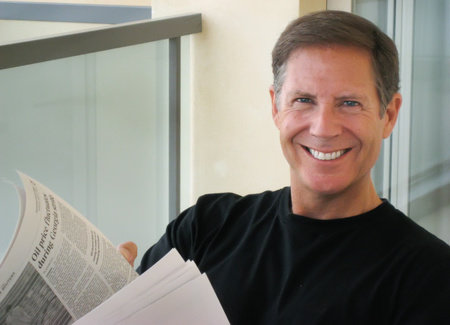 Christopher Reich is the New York Times bestselling author of Rules of Deception, Numbered Account, and The Patriot’s Club, which won the International Thriller Writers Award for best novel in 2006.  He lives in California with his family.

The Prince of Risk

Q:You’ve written two thrillers that break open a fairly covert world—in NUMBERED ACCOUNT it is the world of private Swiss banking and in THE FIRST BILLION it is the high-stakes business of bringing a company public. How do you assess what information to present to the reading public in order to tease their interest, and what to “embellish” for the sake of page-turning plotting?

A: Any business where on a daily basis men and women stand to gain or lose millions of dollars_sometimes in just minutes_is, by definition interesting. Nowhere is the tension higher than in the IPO game. IPO stands for initial public offering. Bringing a company public is a long process and involves many different parts of an investment bank. You could write a whole book about the process itself, but I don’t know if it would be a thriller. The exciting part comes at the beginning_winning the business_and at the end_taking the deal to market. In between is the hard part, the grunt work that fills most I-bankers’s days: due diligence, number crunching, road shows, etc. In THE FIRST BILLION I keep to the exciting parts.

Q:Tell us about THE FIRST BILLION: Was this novel inspired by a true event? A trend? Or something you see in the future?

A:In fact, THE FIRST BILLION was inspired not by any goings on in the stock market but by a paper I read about the disastrous state of the Russian KGB, the equivalent to our CIA. During the 1990s, the once vaunted spy agency suffered from devastating budget cuts and fell on very hard times. Simply put, they had no money. No longer could they fly agents around the world on commercial aircraft. Federal Express canceled their account for nonpayment. At their headquarters outside Moscow they had no photo paper to develop microfilm. The list goes on. All I could think was “My God, these guys must be angry. They must desperately want to get back on the playing field.”

That, along with my interest in the wild and woolly world of the Russian oligarchs, the group of 10 to15 businessmen who have taken control of more than half the Russian economy, set the story in motion. The more I read about these guys, the more I knew there was a great thriller to be written.

A:Quite simply, technology has made the world move faster, mostly through the increased speed of communications or information transfer. It has also created a whole class of information spectators. There are people who live their lives on the Internet, viewing others’ actions as a proxy for their own, a kind of vicarious cyberexistence. The world has become a much smaller place. Too small, by my reckoning. But there is no going back. I still wonder, though, whether we’re getting that much more done, or if knowing so much makes us happier or not. Still, I wouldn’t trade my PC for a paper and quill for anything!

Q:You’ve said in the past that your writing heroes are authors as diverse as Crichton, Demille, Franklin W. Dixon and especially John le Carré. Why these? And are you ready to reveal any new names you admire? What are you reading right now?

A:There are so many wonderful authors; it’s not a question of finding them but of finding the time to read them all. Recently, I’ve been drawn to Irwin Shaw, author The Young Lions and Rich Man, Poor Man. Great stories, great insight into the human condition, vivid prose. Le Carré is and always will be my favorite author. Simply put, a genius and one with a giving heart. Anton Myrer is an author of those big, juicy epics that I love. Once an Eagle is a masterpiece. But who is better at that than James Clavell? Taipan, Sh_gun, Noble House. Page-turners at their finest! The list of contemporary authors who I rush out to buy is shorter: Martin Cruz Smith, Nelson DeMille, Thomas Harris, Scott Turow. Right now I’m reading The Big Breach by Richard Tomlinson, the memoirs of a former MI6 agent, who spent a year in jail for trying to get the book published. It’s a great read_very informative about the kind of training a spy gets these days. Next up, though, is something fun: The Emperor of Ocean Park.

Q:Do you find the process of preparing to write has changed now that you have three very successful yet different suspense novels under your belt?

A:There are four phases to writing a book. Coming up with the idea. Outlining the story. Writing the book. Then re-writing it. Experience has sharpened the skills needed during each phase. Coming up with the idea is the most fun. And rewriting it is where you earn your money. But you still have to spend eight hours a day trying to get the right words onto the page. There is no substitute for working. Elmore Leonard said easy reading means hard writing. Boy, is that the truth.

A:I chose the media industry because more than any other single sector, it has the power to affect our daily lives. Everybody watches TV, goes online, reads magazines, and listens to the radio on a daily basis. Think about your life without media. There’s a big hole, right? Personally, I find that a shame. I do not own a television. As a father of two young girls, I don’t have the time or the inclination. Anyway, media is a good area to write about. It’s sure a lot sexier than meat products.


Q:How about some insider knowledge: What is the next book we can expect from Christopher Reich?

A:The new book is presently titled BLOOD MONEY, and it deals with our government’s efforts to root out terrorist financing. The story concerns an elite team of financial investigators, members of the Foreign Terrorist Asset Tracking Team, (FTAT), and their quest to hunt down a shadowy figure known as “the Director” before he can perpetrate a terrorist act on American soil. I drew a lot of the story from my research into the area. The work being done in Washington, and in concert with our allies, is as fascinating as it is urgent. Stop the money and you stop the acts. But first you have to find the money, and it’s not as easy as you might think. On the plus side, our government has earmarked a lot of money to the task. I was in D.C. earlier this year and had the honor of meeting professionals at the Financial Crime Enforcement Network, Customs, the IRS, and the Treasury Department. I’ll tell you one thing: I wouldn’t want to be the bad guys. Make no mistake; we are going to nail them.