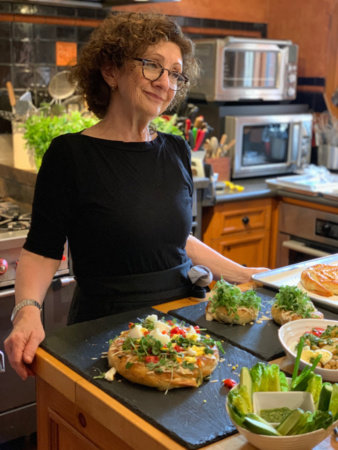 BONNIE STERN is the founder of the Bonnie Stern School of Cooking in Toronto, which she opened and operated from 1973 to 2011. She has studied and taught cooking around the world, hosted three national cooking shows, and for 17 years, wrote a weekly column for the National Post. She has conducted popular workshops for the James Beard Foundation in New York City and leads culinary tours to various delicious destinations. Bonnie is also the creator of a groundbreaking book club in which authors are invited to discuss their work during thematic dinners. She has authored 12 bestselling cookbooks, including Bonnie Stern’s Essentials of Home Cooking, which won a coveted International Association of Culinary Professionals award. Bonnie is the recipient of many awards, including the Ontario Hostelry Institute’s Gold Award, the Premier’s Award, and, in 2021, Bonnie was inducted into the Taste Canada Hall of Fame.

HeartSmart Cooking for Family and Friends