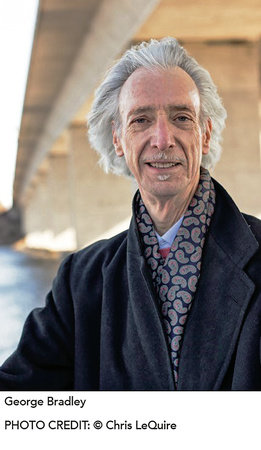 George Bradley was born in 1953 in Roslyn, N.Y. and attended Yale University and the University of Virginia. His first book won the Yale Younger Poets Prize in 1985, and he edited The Yale Younger Poets Anthology, published in 1998. Four subsequent books of his verse have appeared from Knopf and The Waywiser Press, and his New & Selected Poems: A Stroll in the Rain is forthcoming from Louisiana State University Press in 2021.

Bradley’s work has been printed in many periodicals, among them The New Yorker, The Paris Review, The New Republic, Poetry, Parnassus, Grand Street, Raritan, American Poetry Review, Verse (U.S.A. and U.K.), Spazio Umano (It.), Almanacco (It.), and America Illustrated (printed in the United States for distribution in Russia). His prose fiction has been published by The Yale Review, Southwest Review, Literary Imagination, and The American Scholar, and a short story of his was selected for the PEN/O. Henry Prize anthology.

Among the awards Bradley has received are the Witter Bynner Prize from the American Academy and Institute of Arts and Letters, the Peter I. B. Lavan Award from the Academy of American Poets, and a grant from the National Endowment for the Humanities. He has read from his work at many venues, including the Library of Congress, the 92nd Street Y, and the Lannan Foundation.

George Bradley has been employed in construction, as a sommelier, as a copywriter, and as an editor. Currently he imports an olive oil produced on a farm in Tuscany. When not on the farm, he is often in Chester, near the river of rivers in Connecticut.