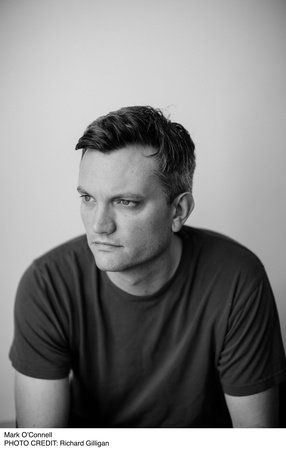 MARK O’CONNELL is the author of To Be a Machine, which was awarded the 2019 Rooney Prize for Irish Literature, the 2018 Wellcome Book Prize, and was shortlisted for the Baillie Gifford Prize for Non-Fiction. He is a contributor to The New York Times Magazine, Slate, and The Guardian. He lives in Dublin with his family.

Notes from an Apocalypse

To Be a Machine

In his latest book To Be a Machine, Mark O’Connell probes the impulses, personalities, and technology of the people who believe the human body, particularly its stubborn insistence on dying and abdication of Moore’s law, is a system ripe for disruption. Meet the transhumanists.

O’Connell’s book takes him deep into the heartland of the professional disrupter class — mostly the Bay Area and the cities, like Austin, eager to take in its spillover — to meet with and discuss the ideas of everyone — mostly men — from billionaire tech CEOs and venture capitalists, to researchers at top-tier universities, to otherwise aimless loaners, apparently eager to extend their time in a world they scarcely seem to enjoy.

O’Connell goes in as no diehard spokesman, and his report is not one of a jaunt through an imagined imminent utopia. Instead, it’s a journey that, like the book’s title, invites questions — What does it mean to be a machine? — and speculative answers to them.

O’Connell lives in Dublin. When I called him, we struggled at first to get a clear connection, an irony of relatively simple tech failure that was not lost. Once clearly connected, we discussed the possibility and consequences of a future where we are in some form machine and in some form — potentially totally — destroyed by machines.

PENGUIN RANDOM HOUSE: You don’t come out of the book as a devotee to transhumanism. When you started out, what were your thoughts on the movement?

MARK O’CONNELL: My initial position was skeptical. At the same time, I never wanted to go in with a skeptical attitude and just come out with skepticism confirmed. I don’t agree with the methods or ideology or the place where those transhumanist ideas come from, yet that almost childish horror that we get old and die, that’s something I kind of share and I think a lot of people do as well. It is sort of basically unacceptable that we have this in our future. So there is something very compelling about the notion of people deludedly or otherwise thinking that this is a problem that can be solved.

PRH: A lot of it seems to be focused on this idea of not just overcoming death, but also overcoming general human inefficiency.

MO: When you talk to transhumanists most of them have a real, basic frustration with the human body and with the limitations of their sort of “meat brains,” that’s the term you come across again and again. I suspect, it comes from an over-identification with computers. A lot of transhumanists are programmers and engineers and they spend a lot of time around computers, seeing systems, and thinking of efficiency and intelligence in a very machine-based way. Transhumanism makes perfect sense logically if you already think of yourself as a machine. It makes perfect sense to want to be a better machine, to want to be more efficient. It seems to me like being ultimately quite an insane way of thinking about human nature and thinking about what it means to be human. That’s really what interested me about transhumanism, is that it comes from this really strange notion of human existence that I think is kind of a confusion of the boundaries between the machines and the humans.

PRH: What do you see being lost in this view of man as machine?

MO: A sort of glib answer would be everything that doesn’t involved a very narrow view of intelligence. Transhumanists have this battle cry that you hear over and over again that is “optimized for intelligence” and that’s the bottom line for every metric of progress. Intelligence is the most important kind of value in the universe. I think that’s a really narrow way of thinking about what it means to be human. It is also a very narrow view of what intelligence means, because when they talk about intelligence they tend to think about computational power. But I think being human is obviously a very messy, very inherently unquantifiable thing in terms of what makes it worthwhile. I suspect it has something to do with not being a machine and with not being ruthlessly efficient and productive and “intelligent.” But that’s not a very good answer. As much time as I spent thinking about this stuff, and talking to these people, I never really came up with a satisfying answer to what it meant to be a human being.

PRH: One of the things that I was thinking about as I was reading the book, and you touch on it too, is that there is some similarity between transhumanism and millenerian thinking. The idea that since there is going to be this great reward at the end, that the contemporary world as it is now is kind of pointless. The problem of this, I’ve always thought from the religious perspective, is that it deemphasizes solving the problems of today because it’s so focused on this thing that is going to come. I was wondering, did you find that transhumanists were very concerned about contemporary problems?

MO: The short answer is no. Because most of the time you are dealing with rationalists who are so extreme in their rationalism that it becomes insanity in a way. I won’t say they’ll dismiss things like climate change, but they’ll say, oh yea climate change is a problem, but it’s fairly well served and there is a lot of people working on it and it’s not going to wipe out all of humanity, so let’s not worry about it too much. They talk about it in terms of future lives. The lives of the people who are yet to be born are just as important or are given just as much weight in the moral calculus as people who already exists, which I guess as a utilitarian and sort of rigorously rationalist claim does make a kind of sense, but for most actually living human beings, it is kind of weird to think of things in that way, for me certainly. I find it hard to care about people who will be born in one-hundred years’ time as opposed to people who are alive now. Maybe that’s wrong, maybe that’s morally a bit dubious, but it seems to me strange to prioritize the lives of people who have yet to be born over those who are living and suffering now.

PRH: It seems like one obvious criticism of transhumanism is that if what they really want to do is extend human life, then they should be focusing on the things today that really shorten it like war and poverty and inadequate medical care.

MO: Yea. But to these folks like Aubrey de Grey, who I talked to for the book, you are just looking at it all wrong. To them, death is an ongoing holocaust that we deal with everyday and if we bring forward the cure of mortality by however many days, it’s thirty September 11ths a week that we’ve prevented. It’s really hard to argue with that kind of extreme rationalism, I find, because you’re kind of talking different languages altogether.