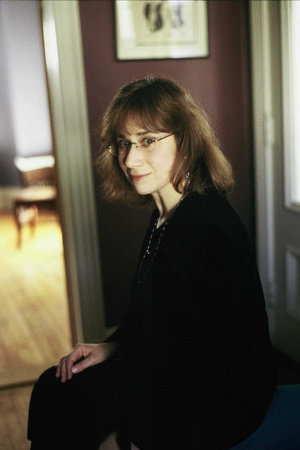 Nancy Werlin is the New York Times bestselling and award-winning author of The Killer’s Cousin, The Rules of Survival, Impossible, and a host of other young adult novels. She received her BA from Yale, was named a Publishers Weekly Flying Start author for her first novel, and has since established herself as a writer of literary teen suspense. Werlin lives with her husband near Boston, Massachusetts.

The Rules of Survival

Zoe Rosenthal Is Not Lawful Good

An interview with Nancy Werlin
Preview Magazine, Fall 2001Do you have any rituals?

I have an office (well, it’s the other bedroom) at home, but on a writing day, I must formally exit my home-as-home and then re-enter my home-as-office. Usually I go out for coffee, but if I don’t have time or if the weather is bad, I will leave the house by the back door and, a few seconds later, come in again at the front. It’s like a bad one-person vaudeville routine.

My sweetheart and my editor read the first complete draft of BLACK MIRROR simultaneously. As I respond to this interview, no one else in my life has yet read it, and won’t, until publication. But that was an exception for a book about which I felt especially vulnerable. For other work, I have a small circle of writing friends from whom I get early reactions. In the end, however, my editor, Lauri Hornik, is the person I rely on most, and most gratefully.

I was ten years old and it was, I felt, past time to choose my future. I was a logical little girl, and so I set before me the pertinent facts: 1) My particular talents, as revealed by school activities and praise from relatives, were writing and acting; 2) Related professions were author and actress; 3) Actresses led unsettled personal lives (Elizabeth Taylor had just divorced again). Ergo, I should be a writer. Today, my only regret is that I was not then in possession of the factoid relating alcoholism and writing. Oh yeah, I’d really love to know what my youthful self would have made of that.

What were you doing when you found out that your first book was beingpublished?

What did you treat yourself to when you found out that your first bookwas accepted for publication?

My best friend since way back in high school (President of the aforesaid Thomson Financial Services Software Solutions) took me out to dinner at the Ritz, at which time she fired me. Okay, the firing part isn’t true. But it makes a good story. I remained employed by Thomson (and my old buddy) for several more years, and I am still working part-time in the software mines, albeit at a different company.

What was the first book you remember reading as a child? Did you have afavorite book as a child?

I remember sitting on the floor of my parents’ back porch on a hot summer day, reading aloud to them from a Dick, Jane, and Sally reader called “Our New Friends.” I was four or five and was determined to prove that yes, I could so read. Later on I had many favorites: A Little Princess. Wolves of Willoughby Chase. The Nancy Drew books. Little Women. Jane Eyre. My father finally had had it with the girly-girl reading and handed over The Three Musketeers. I was doubtful, but I forced myself to read it and I loved it.

Do you read reviews of your own work?

Yes indeed, and if I don’t like one, I imagine a series of petty (but escalating!) annoyances to befall the reviewer. One hapless creature was slated to have her new car sideswiped in the parking lot at 8:35 am; lose her computer hard drive at 9:58 (no backup); have hot coffee dumped in her lap at 11:03, and so on, relentlessly, all day. I felt really, really cheerful by the time I was done.

Have you ever noticed that the amount of time and attention that writers devote to hating bad reviews is waaaaaayyyyy out of proportion to the time they spend on good ones?

What’s the best question a teen has asked about your writing?

“Would you please write back to me yourself, instead of having one of your staff do it?” I’ve been ordering “the staff” around ever since, but they seem to be very lazy.

Okay, seriously. Here it comes, from Meaghan, age 14, frighteningly intelligent, and a budding writer: “Do publishing lunches and the like have dress codes? Would you be allowed to wear, say, studded leather Hell’s Angels type stuff?”

How much of Black Mirror is based on personal situations you may have witnessed or been a part of yourself?

I’d tell you, but then I’d have to kill you.

Tell me about writing Black Mirror.

This was a hard book to write. They’re all difficult—I’m a writer who prefers having written to the actual task of writing—but Black Mirror was especially tough.

Frances is in such despair. I had to write my way into that place and, in fact, the words that begin the book—“ Have you ever been in a state of pain so intense it was like a living creature wound tightly around your ribcage and shoulders and neck?”—originally appeared halfway through the first draft. It was only during revision that I understood that Frances did not work her way into that so-called “dark night of the soul.” She lived there. She begins there.

So the book had to begin there as well. And from the start we know that there is no possible way to make things right in the end for Frances. Her brother is dead, and that cannot be undone. And she’s not good at being an adolescent or a high school student. Her best bet seems to be simply to endure.

But of course, Black Mirror is a suspense thriller, not a novel of adolescent angst, and that helped considerably, because Frances cannot afford to be completely passive, as she’d prefer. She has a criminal conspiracy to deal with…. and a new, vulnerable friend to protect. Life turns deadly around her; and what she does matters. So, as the novel picks up speed, her internal despair and the weird stuff happening at The Pettengill School shift from parallel tracks onto a collision course. In increasing tension, they balance each other. Or at least, I hope they do.

And that is why I like writing YA novels that are also suspense thrillers. It seems to me that putting a teen beset by serious emotional pain into external danger as well forces them to show me—or rather, to discover for themselves—who they really are. In the end, that is what Frances must face: her own self. She must look truthfully into a mirror. She is unwilling to do it; she is afraid of the darkness there. I believe that, if we are honest, so are we all.