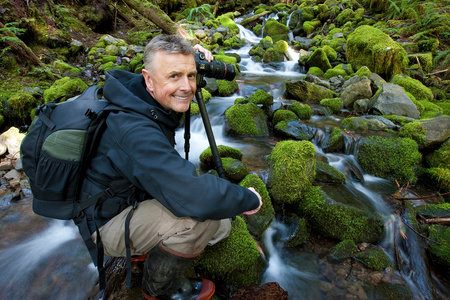 Art Wolfe is one of the most celebrated wildlife/nature photographers in the United States today. His award-winning photography reflects a close study of both nature and composition, and is featured frequently in periodicals such as National Geographic, Smithsonian, Life, and Outdoor Photographer. Internationally, Art has worked with Germany’s GEO & Stern, France’s Terre Sauvage, Italy’s Airone, Japan’s Sinra, and England’s BBC Wildlife magazines. His books include the acclaimed Light on the Land, Bears: Their Life and Behavior; The Art of Photographing Nature; Owls:Their Life and Behavior; Migrations; and Penguins, Puffins, and Auks. He lives in Seattle, Washington.

Donald F. Bruning, Ph.D., is chairman and curator of the Department of Ornithology at the New York Wildlife Conservation Society of the Bronx Zoo. He has worked with birds for more than thirty years and has been an active member in conservation efforts for birds around the world. He lives in Ardsley, New York.

Photographs from the Edge

The New Art of Photographing Nature