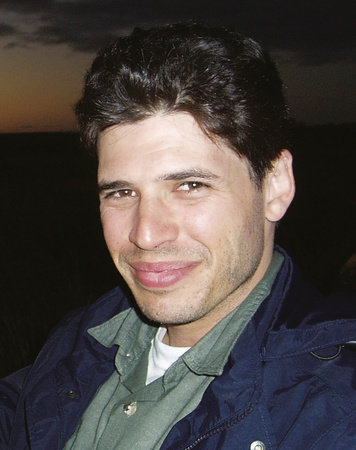 Max Brooks is an author, public speaker, and nonresident fellow at the Modern War Institute at West Point. His bestselling books include Minecraft: The Island, The Zombie Survival Guide, and World War Z, which was adapted into a 2013 movie starring Brad Pitt. His graphic novels include the #1 New York Times bestseller The Harlem Hellfighters.

Max Brooks is the wildly creative imagination behind World War Z, and is now publishing a new book – a graphic novel called The Harlem Hellfighters. Illustrated by Caanan White, the book tells the story of the World War I 369th regiment, a group of black men who came to be known as The Harlem Hellfighters. Recently, news broke that Sony picked up the novel to adapt for the big screen. Penguin Random House caught up with Max just as he heard the news to talk casting, the seed of the idea, next projects, and more.

PENGUIN RANDOM HOUSE: Upon hearing the fantastic news that Will Smith and Sony have teamed up to produce a film adaptation of your new graphic novel, The Harlem Hellfighters, we immediately began thinking about format. Have you gotten to that piece of the film plan yet? Will it be animated a la Persepolis? Entirely live action like The Dark Knight? Or a mixture of both, like (the wildly underrated) Scott Pilgrim vs. the World?

MAX BROOKS: Wow, I’ve never actually been asked that before, and to be truthful, I’ve never even thought about it as nothing else but a live-action movie, if that. It might work as pure animation; clearly we have the artwork for it. We’re in the earliest stages of this process. The eggs have barely been laid, let alone hatched. Let’s see what the future will bring.

MB: Right now I’m still trying to digest the early interest in the story itself. I’ve spent so many years being rejected, having so many doors slammed shut, that the very idea that someone, anyone, now wants to try to turn it into a movie is simply mind-boggling.

PRH: Any specific casting ponderings you’d care to share with us?

MB: Again, it’s too early to tell, but I will say this: There is no shortage of black talent out there, and I specifically say “black” because not all of the amazing actors out there are American. Chiwetel Ejiofor and Idris Elba alone could carry any movie. Throw in Anthony Mackie, Terrence Howard, Michael B. Jordan, as well as the gold standards of my generation like Morgan Freeman and Denzel (just to name a few) and the list is endless. When you think about it, there’s enough black supertalent out there to fill the entire 369th regiment … oh yea, I almost forgot, there’s that guy from “Independence Day.” Whatever happened to him?

PRH: What first turned you on to the story of the 369th infantry regiment?

MB: I first heard about it when I was a kid, about eleven years old, from a young man who was working for my parents while studying to become a history professor at UCLA. I think it was the sheer injustice of it that kept me interested, as a white kid from the good part of L.A. (the REALLY good part), that kind of injustice was simply inconceivable.

PRH: What do you hope readers take away first and foremost from your graphic novel? Do you hope what audiences take from the adapted film version will differ?

MB: Well I can’t speak for the film, but I hope the graphic novel will serve as a testament to what the human spirit is capable of. We’re all the same – human beings I mean. No matter what our outer coating looks like, we all share the same DNA. I’m hoping that no matter what someone’s outer coating looks like, they’ll be inspired by the heights their fellow human beings are capable of climbing.

MB: Right now I’m deep in the middle of my comic book series, “The Extinction Parade.” On the surface it’s about zombies vs. vampires, but deeper down, it’s really about the pitfalls of privilege. I wanted to explore a philosophy that I’ve come to believe as an indestructible truth, that strength comes from compensating for weakness, that overcoming the adversity of the past is the only way to prepare for the challenges of the future. I wanted to write about a species (vampires) that have never had to struggle, or adapt, or even live in fear and how that comfortable existence has robbed them of the psychological-emotional skills they’ll so desperately need to prevent their one food source, humans, from being devoured by zombies.