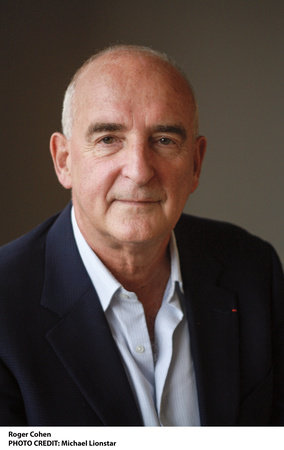 ROGER COHEN is the Paris bureau chief and a former op-ed columnist for The New York Times, where he began working in 1990. He has also worked for the Times as a correspondent in Paris and Berlin, and as bureau chief in the Balkans covering the Bosnian war, for which he was cited for excellence by the Overseas Press Club. He was named foreign editor on 9/11, overseeing Pulitzer Prize-winning coverage of the aftermath of the attack. He has also worked as a foreign correspondent for The Wall Street Journal and Reuters. His previous books include The Girl from Human Street, Soldiers and Slaves, and Hearts Grown Brutal. Born in Britain to South African parents, he is a naturalized American. He lives in Paris.

Throughout his long and prestigious career as a journalist, Roger Cohen has been known for examining the horrors and triumphs of war and nationalism. But in his forthcoming book The Girl from Human Street: Ghosts of Memory in a Jewish Family, Cohen delves into his personal past, tracing his forebears from the bright beaches of South Africa back to the shtetls of Lithuania. Through one family’s saga — particularly his enigmatic mother’s subplot — Cohen manages to bring to light paradigmatic truths about the consequences, personal and sociological, of anti-Semitism and Jewish displacement throughout the twenty-first century.

Below, we’ve asked Cohen about writing a memoir versus writing a column, the perils of ambitious research, and the ties that bind.

PENGUIN RANDOM HOUSE:Writing a memoir is a very different endeavor than writing an op-ed column. How did your writing process change — on a daily and macro level?

Roger Cohen: Column writing, as colleagues have noted, is like standing under the blades of a windmill. You avoid one and the next is coming to get you. It’s pretty relentless. It’s personal, because it involves opinion, but not nearly to the degree of a memoir. So I tried to clear away all the journalistic clutter and free my mind to focus on the story of my family I wanted to tell. I had to make a clear separation. Get out of one mental universe into another. Different parts of my mind and sensibility were involved. I write best in the morning. If I don’t get started early I tend to waste the day, at least when I am writing books. I have four or five good hours after an early start.

PRH:You mention early in the book that while writing this book, you started to wonder if journalism — running after stories in far-flung places — was a means of outrunning your own background. Can you elaborate on this? For how long had you considered writing a memoir, and was the process as you anticipated?

RC: The story of my mother and her mental illness has haunted me for a long time, and for a long time I’ve question whether my family’s story of repetitive displacement played into her anxiety and eventual collapse. I knew I needed to write about this some day. That’s how I deal with the issues closest to the core of my being — word by word. Because it was painful, because the personal is not easy to write, I kept putting off the day. But the adrenalin of running to the next dateline, and of meeting the next deadline, began to fade. Life closes in. It occurred to me that perhaps I had the gift of empathy with others’ pain because of my own. If that was the case, it was time to turn my gaze inward rather than outward. A friend said to me long ago, “Journalism is a cheap shot for you.”  The thought has reverberated down the years.

PRH:The scope of the research in this book is huge, taking you across centuries and continents. What was the biggest challenge here?

RC: The biggest challenges were getting to grips with Jewish history in Lithuania, tracing my family’s story in South Africa, and finding British hospital records of my mother’s mental illness. The latter I was fortunate enough to find — at least some scraps of them — by applying under Britain’s Freedom of Information Act. So I now know at last when in my infancy my mother disappeared into a sanitarium and when she had electroshock treatment (one day before my third birthday). In Lithuania, every trace of my family was gone (as of most Jewish families), but going to their towns and villages and interviewing people there enabled me to begin to imagine their Shtetl lives, as did several excellent books on the subject, including Rose Zwi’s “Last Walk in Naryshkin Park” and Ellen Cassedy’s “We are Here: Memories of the Lithuanian Holocaust.”  In South Africa the National Archives revealed telling details on my pioneering great-grandfather, Isaac Michel, who arrived penniless from Lithuania and became a founder of the legendary O.K. Bazaars department store. The mystery of where all the wealth went remains, however.

PRH:In your New York Times column, you write often about Israel’s national identity. Did you have a sense of how much politics and history you wanted to include in The Girl From Human Street?

RC: I’ve always preferred to tell political stories through personal stories. What has fascinated me as a writer is how vast events leave their imprint in a single psyche. I’ve also been fascinated by time, how it’s not linear, how it circles back, how W.G. Sebald’s “ghosts of repetition” haunt us. My family always wanted to leave the past behind with each displacement. It could not. That past was Jewish. So the book is concerned with Jewish identity, Israel and Zionism (part of the family ended up in Israel). But it takes up these themes through people and their stories, rather than the other way round.

PRH:You piece together disparate threads of your family’s story in the book. Without giving too much away, was there anything that really surprised you — anything about your family you didn’t know before starting the research process?

RC: How we shared so much but spoke so little about those shared experiences. How we had lost touch with each other as we spanned out across the world, and yet were tied in ways we did not imagine.