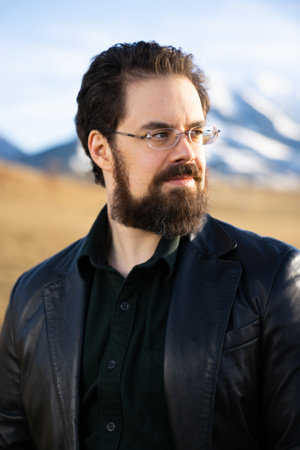 Christopher Paolini was born in 1983 in Southern California. His abiding love of fantasy inspired him to write the Inheritance Cycle, which quickly became an internationally bestselling series. Christopher wrote the first draft of the introductory book in the series, Eragon, at age 15. Christopher draws inspiration for the world of Eragon and his dragon, Saphira, from the natural beauty that surrounds his home in Montana: the tumultuous weather, the roaring Yellowstone River, and the soaring Beartooth Mountains. Find out more about Christopher and the Inheritance Cycle at Alagaesia.com.

The Fork, the Witch, and the Worm

The Acts of King Arthur and His Noble Knights

Seasons Greetings! I am writing to you from my home in Montana, where I’m currently snowed in. From my window I see the soaring Beartooth Mountains, which inspired my fantasy series, the Inheritance cycle. Sometimes I imagine the dragon Saphira soaring among the jagged mountain peaks, her blue scales sparkling and reflecting rays of sunlight at the snowbanks around her.

I’m currently writing the conclusion of Eragon and Saphira’s adventures, a project that has taken me over ten years. It’s hard for me to imagine getting up in the morning and not thinking about it. And yet, I can hardly wait to be finished, for I have many other stories to tell.

In my office is a long desk, and if you could see it you would probably smile, for it’s covered with piles of books, new books … like presents yet to be unwrapped. Once my manuscript is finished, I’m going to immerse myself in words, not my own, but others’.

Although I have little time for reading, the Iain M. Banks sci-fi books have recently captured my attention. His creativity and world building have astonished me more than once. And I’m looking forward to launching into Tad Williams’s Shadowmarch series.

I wish you the very best and hope you find quiet moments to relax with a good book and, for a time, venture into another world.

For well lover a decade, Christopher Paolini’s Inheritance Cycle has delighted fantasy readers of all ages. Now, Paolini is back with an Eragon coloring book, plus news about a new science-fiction novel, and maybe a book set in the world of the Inheritance Cycle. We spoke at SDCC 2017.

PENGUIN RANDOM HOUSE: Great to bump into you, Christopher. I understand that you’ve got a new entry in the Inheritance Cycle, and one in an entirely new format, at that.

Christopher Paolini: That’s right. It is The Official Eragon Coloring Book, a collaboration between me and Ciruelo Cabral, who is a wonderful fantasy artist. It was an absolute treat for me to see him bringing to life all of the different characters and scenes to life. Not just from Eragon, but all of the other books in the Inheritance Cycle.

PRH: is it fair to say that the visual arts have always been a part of conceiving your story?

CP: Definitely. I started as an artist before I was a writer. I did all of the interior art for my books, such as the map and the dragon eye, as well as additional pieces for various deluxe editions. Also, the valley where Eragon grows up is named for John Jude Palencar, who Penguin Random House later picked to paint the covers of the novels. The character Brom is named for the famous fantasy artist of the same name. Art has played an enormous role in my life and my writing, and is a constant source of inspiration.

PRH: Did the Inheritance Cycle start with illustrations? Where did it begin?

CP: It didn’t come from art. It came from my love of science-fiction and fantasy in general, and more specifically with a young adult book titled Jeremy Thatcher, Dragon Hatcher by Bruce Coville. It is a great story set in our world about a young man who finds a stone in an old, beat-up curiosity shop. The stone is revealed to be a dragon egg, which begins to hatch. I loved the idea of a young man who finds a dragon egg. I asked myself what sort of world a dragon might come from, who would find it in the middle of a forest, how it ended up there, who might also be looking for it, and so forth and so on.

PRH: Do you find that new readers are still discovering the Inheritance Cycle? Are there new generations coming to it and discovering your work?

CP: I do, and as a matter of fact, the word you used, generations, is what surprised the most. It has become a generational thing. We’re here at San Diego Comic Con right now, and I just did a signing at the Denver Comic Con a few weeks ago. What really astounded me at both events is that it is a generational thing. There are people coming up who named their children after the characters, or young people who found the books in the school library, or got them passed down from their parents. Of course, there are the older readers, as well. I didn’t expect any of these things when I started writing Eragon: I wanted to write a story that I would enjoy reading myself. Not only to see people enjoy reading it, but to see it continuing on is incredibly gratifying. It is humbling; something I would have never predicted.

PRH: What do you have going on right now? Is there anything you can talk about?

CP: I have the coloring book that just came out, but I also have a massive science-fiction novel that I just sent to my agent. Hopefully, I’ll have some publication news about that before too long. I do have another book set in the world of Eragon. It is all plotted out. People who have read the fourth book know that there are some questions that I left unanswered. Those are the basis for book five.