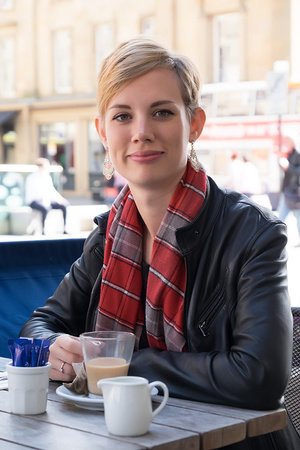 Growing up I always loved stories and writing. When I was little one of my favourite games was to staple together sheets of paper and make them into a book with stories and pictures, and later I spent hours after school writing stories. One of the first books that captured my imagination was The Lion, the Witch and the Wardrobe by C. S. Lewis–I felt like I could believe in the story even though it was extraordinary and magical. But I think the book I most admired when I was growing up was To Kill a Mockingbird. Reading writing at its best and most honest was one of the things that most inspired me to want to write myself.

I think The Eyes of a King really began with the voice of the narrator, Leo. It came to me so clearly that I wanted to write it down and try and capture that voice somehow. Most of the other characters and settings emerged from that. People have asked me why I wrote a story set in an alternative world. I think all writers are describing parallel worlds in a way because writing is often about how to find a new way of seeing things, so you can turn something familiar into another country and then people can see it again as if it’s for the first time. Although a lot of the ideas and characters for The Eyes of a King came to me easily, the challenge is always to find the most honest way of putting them into words. I think that will always be my main challenge, and what is at the heart of writing for me.

I was at school when I was working on The Eyes of a King, so I wrote in any available time I had–sometimes I was even noting down a few sentences at the back of the class or in between lessons so as not to forget them. I think that was a good way to learn to write; it means everything you put down on paper has to be thought out first. Even now, I make up a lot of the story without putting pen to paper, and I can usually see the characters clearly before I write anything down. I left school last summer, and have spent the last year as a full-time writer, finishing off the second book in the trilogy and starting on the third. I don’t work to a set routine–I write best late at night and redraft best in the mornings so it depends what stage a story is at. I’m hoping to go to university in September, so I will have a different routine again for finishing off the final book in the trilogy.

I started The Eyes of a King just after I turned 14. It was sometimes a challenge to balance writing with my other commitments, but I don’t think you are ever too young to start writing if you have a story you want to tell. I haven’t been a writer for that long, and I’m still learning all the time. But the most important thing that I try to do is to write about characters that I really care about, and leave out anything that doesn’t come from the heart.

The Heart at War

Voices in the Dark