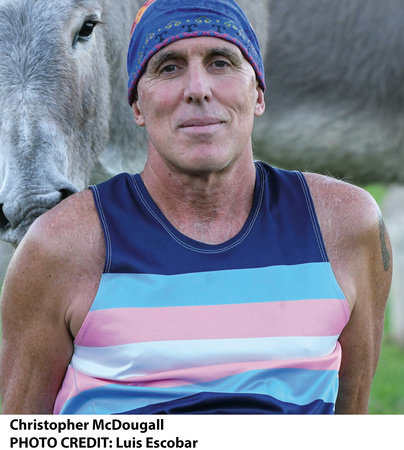 Christopher McDougall covered wars in Rwanda and Angola as a foreign correspondent for the Associated Press before writing his best-selling book Born to Run. His fascination with the limits of human potential led him to create the Outsidemagazine web series, “Art of the Hero.” He currently lives with his wife, two daughters, and a farmyard menagerie in Lancaster County, Pennsylvania.

For his first book, Born to Run, Christopher McDougall ran hundreds of miles – barefoot, no less – to unearth the secrets of an obscure tribe of Mexican Indians who are brilliant at distance running. The book became a bestseller, which, you’d think, might inspire the writer to take it easy for his second book and maybe hunt down the secrets of the world’s most comfortable couch. Nope. Instead, McDougall undertook an even crazier mission in writing Natural Born Heroes and retraced the perilous steps of a band of resistance fighters who kidnapped a German general during World War II and hid him in the rocky mountains of Crete. This was all part of McDougall’s investigation of modern-day heroes, which concludes ‘hero’ is an attainable title for all of us as long as we achieve peak physical conditioning, follow a near-starvation diet, and train our brains to ignore the fight-or-flight response when faced with danger. Below he spoke to Penguin Random House about his heroic quest.

PENGUIN RANDOM HOUSE: Your first book was a bestseller. Was there tremendous pressure to repeat that?

CHRISTOPHER MCDOUGALL: Oddly, not that much. I had the same sort of elation with this book, based on the feeling of: Oh man, what a buried treasure I’ve found. With Born to Run, I felt like the only one who could screw it up was me. With Natural Born Heroes, I had a better feeling, and I thought the material was just as good, but now I had a bit of experience. I had a little bit of scarring already.

PRH:There have been so many diet and fitness fads over the years, and they’re increasingly tied to ancient cultures like the Paleo diet, for example. Do you worry the diet you advocate in the book will be considered a fad as well?

CM: No, because I’m really conscious of coming in as the outsider. With barefoot running in Born to Run, I was trying to present a best-case argument. I’m doing the same with the ‘fat as fuel’ argument, but I’m still kind of on the fence. I was able to take a more objective approach. I’m not looking for a new discovery but something that appears over and over again through human history. The Paleo diet is an eating plan that you can find examples of throughout history.