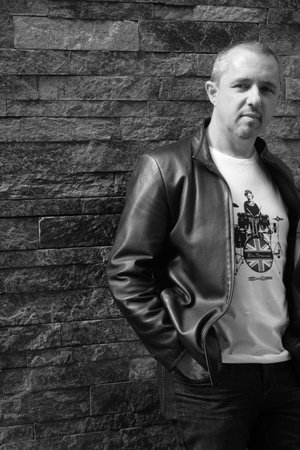 In 2006, Brian was scuba diving off a small island near the coast of Phuket when his dive buddy frantically pointed at a small underwater rock formation that Brian was just passing. Brian turned to see a huge moray eel with a head the size of a football staring at him.

Brian started to back away slowly, but instead of attacking, the eel turned and wound its way into a crevice. That incident is not yet in one of Brian’s books, but one day it might well be. A lot of Brian’s real-life adventures end up in his books—in fictional disguise of course! Whether it is an attack by a vicious swarm of wasps, being bullied at school, or skimming the surface of the ocean in a tiny seaplane, Brian loves to use real incidents as the basis for the stories in his books.

A recent face-to-face encounter with a deadly king cobra and a ride on an elephant with a mind of its own are all lodged away somewhere waiting for the right moment to emerge in a story.

Even at school Brian knew that he wanted to be a writer. It took him 30 years to realize that dream with his first junior novel published in 2003.

He studied computers at university and then trained as a journalist. He worked as a reporter and an advertising copywriter, a radio announcer and an Internet developer before finally realising his lifelong dream of being an author.

Brian lives on the North Shore of New Zealand’s largest city, Auckland, with his wife and two children. They have two dogs. His hobbies are scuba diving, cycling, travel, amateur theater, photography, and rugby (both union and league).

Here are some more things you might not know about Brian Falkner:
-         He was once a carry-over champion on Wheel of Fortune.
-         He really sucks at poetry, so when he needed a poem for his book Super Freak, he “borrowed” one from his daughter, Laura (then 12 years old).
-         He is an award-winning Web site developer.
-         The Story Wizard on www.brianfalkner.co.nz is actually Brian in disguise.
-         Both his hands just have a single line across the palm (sometimes known as the Simian Crease), a rare quirk that he shares with former British Prime Minister Tony Blair.
-         On stage he has played the wizard in The Wizard of Oz, the Fiddler in Fiddler on the Roof, and Santa Claus in The Lion, The Witch, and the Wardrobe.
-         His favourite movie is The Matrix.
-         His favourite television show ever was a 1970s British series called The Professionals.