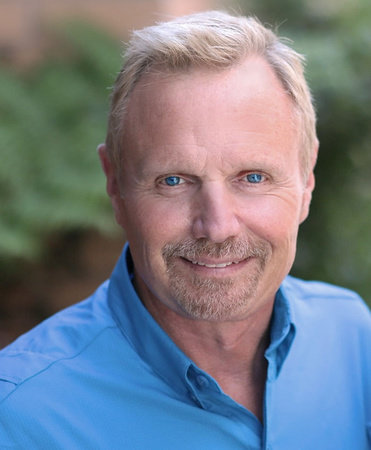 Stephen Arterburn is the founder and chairman of New Life Ministries–the nation’s largest faith-based broadcast, counseling and treatment ministry–and is the host of the nationally syndicated “New Life Live!” daily radio program heard on over 180 radio stations nationwide. Steve is also the founder of the Women of Faith conferences attended by over 3,000,000 women.

Steve is a nationally known public speaker and has been featured in national media venues such as Oprah, Inside Edition, Good Morning America, CNN Live, New York Times, USA Today and US News & World Report.

As a best-selling author, Steve has written over 80 books, including the bestselling Every Man’s series. He has been nominated for numerous writing awards and won three Gold Medallion awards for writing excellence.

Steve has degrees from Baylor University and The University of North Texas as well as having obtained two honorary doctorate degrees.

Steve resides with his family in Laguna Beach, California.

Worthy of Her Trust

Preparing Your Daughter for Every Woman’s Battle

Q & A with Stephen Arterburn

1. When did you decide to get involved with confronting sexual sin?

In 1994 I wrote a book that is now called Those Who Love Too Much. It was about sexual, romance and relationship addictions and dependencies. It came out of my experience working in a New Life Treatment Center where we had a program for those who struggle in these areas. I saw people so desperately trapped and then I saw so much hope for those who were willing to face the truth about themselves. Because of that book, WaterBrook contacted me about working with Fred Stoeker. When I learned what Fred wanted to teach people, I was on board. And it has been an amazing experience to get so many emails from men whose lives have been changed.

2. How big is the problem of sexual sin in the American church today?


3. You say there is a new sexual revolution taking place in America
today? How so?

Hugh Hefner started the first sexual revolution by encouraging men to abandon traditional values and have all the sex they want and view all the pornography they want. But rather than men being more sexual and more able to function as males, pornography has neutered men. It stops them from being able to perform as a man. It kills the desire for a real woman. Men have finally seen it and are sick and tired of being sick and tired. They are rejecting the views of society and finding hope and healing from returning to God’s standards.

4. What is the main message found in Every Heart Restored? Can women
bounce back after discovering their husbands’ problems?

I think the main message is that it is tough to heal after discovering your husband’s sexual sins. But there is hope and healing. If you persevere and surrender to God’s power, you can experience the healing that is there for you. We don’t want women to bounce back. We want them to be healed and we want them to have a deep level of intimacy that they never experienced before. But it is not easy or instant. It is a process.

5. What about the emotional roller coaster many women find themselves
on? How can they cope?

They need other women to come along side them. At New Life we have weekend Every Heart Restored seminars. The women come together and they stay together. Some of the groups are still meeting over a year later. You need the love and acceptance and understanding of some other women who can provide strength when you are weak and who can provide comfort when you are hurting. And they cope best when they have an understanding husband who comes along side them and allows them to take all the time needed to heal. When he does not push himself on her the healing is the healthiest process.

6. What about single people in a serious relationship? How can they
prepare for the battles they face?

You have to set the boundaries before you get in the setting where you are going to need them. You need to do a lot of stuff with others. And each in the couple need a lot of support from those of the same sex. Someone to hold you accountable is invaluable. You must have truth tellers in your life and you have to have people who have permission to ask you tough questions about your behavior.

7. You’ve counseled hundreds of people on your national radio program
New Life Live! Have you noticed a common theme in those you counsel?

We are all messed up together. We have all fallen down and have had a tough time getting up. We have all struggled together. But we have a common hope that we have another chance and we are all, together, looking for how to experience that second chance.