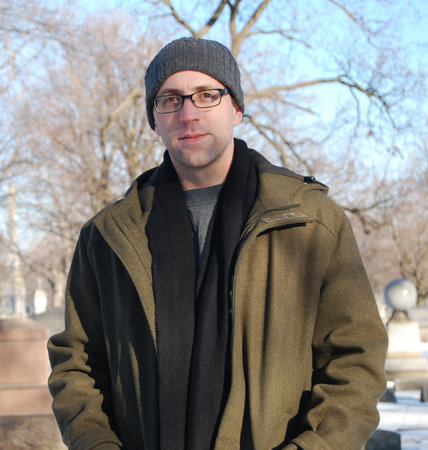 Daniel Kraus is the author of two novels and director of six feature films. He is also an editor at the American Library Association and a regular contributor to such publications as Cosmopolitan and Maxim. His first novel, The Monster Variations was selected to New York Public Library’s “100 Best Stuff for Teens.” He lives with his wife in Chicago. Fans can find him online at www.danielkraus.com and on Twitter at DanielDKraus.

A note from author Daniel Kraus

The genesis of Rotters came to me ten years ago.  I was driving away from the North Carolina coast, trying to outrun a hurricane, when I passed a cemetery.  An image popped into my head: two men battling through the swampy, corpse-ridden mud to find some valuable object.  I didn’t know who these men were or what they were after, but the vision was apocalyptic and exciting.

A few years ago, I began to give serious thought to those two nameless figures.  I’ve always liked horror movies and had started to take notice of all the great grave robbing scenes.  They were everywhere, from the obvious classics (Frankenstein), to new blockbusters at my local multiplex (Drag Me to Hell), to more obscure fare I’d catch late-night on Turner Classic Movies (like the must-see Mr. Sardonicus).  One constant stuck out: grave robbing was always kept on the periphery, as if it were something even the filmmakers were scared to dwell upon. And so I thought, what if you did dwell upon it?  What exactly would you see?

Months later I found myself on the winning end of a stack of history books about “resurrection men”—nineteenth-century grave robbers hired to steal bodies for use in medical school dissections.  You might expect I’d be disgusted at their adventures; instead, I found myself greatly impressed.  There was an art to it.  And like all arts, it was something that could be passed down, master to apprentice, or—even more interesting to me as an author—father to son.

Rotters is a story about a boy named Joey Crouch who loses everything—his mother, his friends, his home, even his one talent is rendered useless—and then out of desperation turns to Ken Harnett, his mysterious and threatening biological father, only to find that Harnett is, in fact, the dad he’s always needed.  And this truth is in spite of—or maybe partly because of—what he does in graveyards under the cover of night.

I knew right away the biggest challenge in writing the book would be to generate sympathy for people who did something so repugnant.  But I also knew right away that sympathy was possible, because the passing on of treasured information is by its very nature a tender act.  Even Harnett’s initial coldness is a form of tenderness: it’s meant to turn Joey away from a dangerous and lonely life.  When Joey is finally let in, he suffers a training period as cruel as that of any budding concert pianist, but what drives this merciless routine is, once again, love.  The secrets Harnett reveal to Joey are no less than the secrets of mortality and how we deal with the promise of our own demise.  It’s heavy stuff, no doubt.  But if handled with a little style and a lot of guts, I knew it could be the stuff of great literature, too.

We’ve all seen those time-lapse films of the decomposition of a dead animal.  At first, it’s gross.  But then the flesh’s constant reinvention becomes fascinating, and, after a while, even sort of beautiful.  It is my hope that Rotters has a similar effect—that if we, writer and reader, look hard enough together at something ugly, it might just transform into something magnificent.

Even before joining his father in the family business, the complications in Joey’s life are legion: he’s an outcast and his dad is the town pariah—not to mention that awful smell.  But these burdens are nothing when compared to those of the men Joey meets: the underworld of grave robbers known as the Diggers.  These Diggers are proud knights fighting for a dying kingdom and have given their entire lives to a labor no one will ever appreciate.  Joey’s arrival and his relationship with Harnett forces the Diggers to wonder if they’ve wasted their lives.  Surely no lurker of graveyards deserves a gift as great as love.  This is a world of darkness that Joey has plunged into—and we haven’t even gotten to Harnett’s would-be brother Boggs, whose jealousy runs so deep that he’ll stop at almost nothing to make Joey his own son.

Darkness is a defining characteristic of Rotters.  But it’s worthy to remember that darkness is just that—it’s dark—and what is being concealed in the dark is not just the horrible and fearsome, it’s also the inspirational and moving.  Horror means nothing without happiness; dark means nothing without light.  Rotters may make you feel scared, but hopefully it will also make you simply feel.  It’s that kind of book, or at least I hope it is.