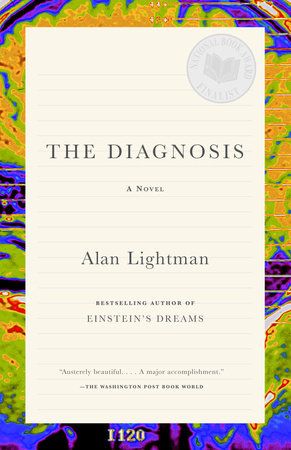 The introduction, discussion questions, suggestions for further reading, and author biography that follow are designed to enhance your group’s reading of The Diagnosis, a darkly comic exploration of our modern obsession with speed and information.

Alan Lightman, author of the widely acclaimed Einstein’s Dreams, portrays a man caught in the grip of a mysterious affliction that affects his ability to function and undermines his most basic assumptions about the world. Bill Chalmers, a junior executive at Plymouth, is on his way to work when he suddenly forgets his name and his destination. Remembering only his company’s motto–"The maximum information in the minimum time"–he rides the subway, his panic mounting until it reaches the breaking point. When the police board the train they find Bill in a fetal position, stripped of socks, shoes, and shirt, clasping his cell phone to his chest. Later, Bill escapes the hospital in which he is summarily deposited and wanders the streets of Boston with vague, tantalizingly familiar images and names flickering through his mind. Then, in a moment of sheer joy, he is flooded with memories. Within twenty-four hours, he’s back at his laptop, clicking on e-mail and checking his watch, desperate to recapture lost time. But his apparent recovery is cut short by a new horror: a tingling numbness renders his hands and arms nearly useless. Forcing himself to disconnect from the electronic universe and the barrage of missives from the office, he goes to his doctor in search of an explanation.

Bill’s quest for a diagnosis becomes a journey into a modern-day hell. He is given tests by detached doctors who rely on the latest technology and massive medical data banks, yet cannot account for the inexorable degeneration of his body. His colleagues at Plymouth regard his incapacity as an opportunity to surge ahead of him on the corporate ladder. His wife, consumed with guilt over an online affair with a man she has never met, accuses Bill of conjuring up his symptoms. His teenage son, Alex, finds refuge in cyberspace. Intrigued by the story of Socrates’ final days on PLATO ONLINEª, he sends it via e-mail to Bill. It becomes, along with maddeningly inconclusive bulletins from an army of doctors and urgent updates and instructions from Plymouth, part of a constant flow of communications of which Bill vainly struggles to make sense. As his body succumbs to complete paralysis and his mind fills with thoughts of lost joys and pleasures, Bill comes face-to-face with the emotional and spiritual repercussions of a life spent in the mindless pursuit of the maximum information in the minimum time.

Alan Lightman interweaves the story of Bill’s frightening descent into helplessness and hopelessness with passages from the "Anytus Dialogue," an original, beautifully crafted narrative of Socrates’ death from the perspective of the man responsible for the great philosopher’s trial and execution. Evoking through humor, satire, and poignant insight the malaise of our times, The Diagnosis asks us to contemplate the import of Socrates’ conviction that "the life which is unexamined is not worth living" in a world in which information overload literally leaves us no time to think about who we are and where we are going.

1. Why does the novel begin on the subway? What are the mythological or metaphoric implications of Bill losing his way on an underground journey?

2. How do Bill’s encounters with the homeless woman [p. 4] and with his neighbor [p. 7] reveal what kind of man he is? How do the descriptions of the station and the train ride establish the atmosphere for the rest of the novel?

3. As his panic mounts, Bill reflects on what is happening to him [p. 15]. Why can he recall the times of his appointments but not the first name of his coworker, Jenkins? What does the order in which he forgets things reveal about modern society?

4. In his attempt to rediscover his identity, Bill escapes from the hospital, wanders through Boston neighborhoods, and eventually ends up in a church. Why does his search follow this particular path? Both hospitals and churches are commonly thought of as sanctuaries. To what extent, if any, do they serve this purpose for Bill?

5. One of the most bizarre events of the evening is Bill’s confinement in the cash booth [p. 61]. What images, metaphors, and even individual words give this scene its power and resonance? Why does it mark the turning point for Bill?

6. When Bill returns home, why is he so secretive about what happened to him? What does his reluctance to admit his memory loss reflect about his relationships with his family and coworkers? About how he perceives himself? Are his actions understandable? In light of their initial reactions, do you think Melissa and/or Alex could have provided an emotional anchor for him? If he had confided in them immediately, would it have changed the course of events? What other opportunities does Bill have to reconnect with his emotions throughout the course of the novel? Why doesn’t he take advantage of them?

7. Alex greets his father "outfitted in a steel-mesh face mask, white jacket, white glove, and white shoes . . . and he brandished a foil" [p. 72]. Why is the reunion between father and son portrayed in this way? How does Alex’s interest in fencing, a fairly esoteric activity, add another dimension to the story? In what ways is it linked to his subsequent fascination with PLATO ONLINEª?

8. Why does Lightman give so much space to the e-mail messages circulated among the characters? Beyond a convenient (and often amusing) way of recording events, what purpose do they serve?

9. What does the relationship between Anytus and his son, Prodicus, have in common with the relationship between Bill and Alex? In what ways do the sons challenge their fathers’ beliefs about life, either implicitly or explicitly? Is alienation between fathers and sons an inevitable part of life, or are Anytus and Bill "bad fathers," guilty of abnegating their moral responsibilities to their sons?

10. In brooding about his situation, Bill thinks, "Of one thing he was certain: that he had been afflicted far beyond what he deserved. . . . He, who played by the rules, who was more intelligent and able than most, who wanted only a nice house in the suburbs with a family who loved him, an adequate income, an eventual senior partnership and position where he could hold his place in the world" [p. 149]. Do you think this passage describes what most of us are looking for in life? What elements are missing?

11. Why does Melissa say, "I’ve caused everything. I’ll never forgive myself" [p. 365]? Is this an expression of the guilt she feels about her online relationship with the professor and her failure to support Bill emotionally? Is it possible that she is actually in some way responsible for Bill’s illness?

12. In the "Anytus Dialogue," Prodicus says, "Sokrates has drawn what he is too modest to speak. He has revealed his true self and the selves of us all" [p. 95]. How do the images Socrates draws relate to the themes of the book? What do the drawings Bill scrawls across his bedroom reveal, perhaps inadvertently, about his true self and the selves in all of us? If you are familiar with Plato’s Republic, how can the "Allegory of the Cave" be used as a key to understanding the underlying meaning and message of The Diagnosis?

13. Lightman juxtaposes the stories of Socrates and Bill Chalmers without drawing explicit comparisons between them. In what ways are the two stories parallel? How does Bill’s eventual acceptance of his fate echoe the attitudes Socrates expresses to Anytus in talking about his imminent execution?

14. The Diagnosis can be seen as a "dystopian" novel, a portrait of a society that has distorted the most basic principles and values of humankind. What elements does it share with George Orwell’s 1984, Margaret Atwood’s The Handmaid’s Tale, Alan Nourse’s Bladerunner, and other visions of dystopia presented in literature and film? What aspects of the novel are the most disturbing?

Alan Lightman is a professor of humanities and a lecturer in physics at MIT and lives in Boston. His previous books include Einstein’s Dreams, Good Benito, and Dance for Two.

Intuition
Back to Top