A Conspiracy of Paper Reader’s Guide 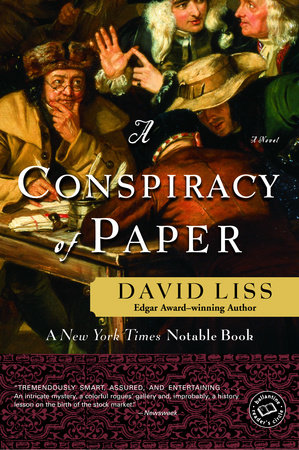 A Conspiracy of Paper Reader’s Guide

1. Do you think Weaver should have constantly bailed Miriam out of trouble? What do you think about him not getting the girl in the end? Did you want to see them together or was the books’ ending more believable?

2. Did this novel make you change your sentiments about the current stock market? Did it make you want to become more cautious in your own investments? Did you read it as a cautionary tale?

3. For many centuries orthodox Jewish communities have lived inside European societies but also outside of them. In what ways did Lienzo’s fear harm his son? In what ways did it protect him? Do you think the Jews of the eighteenth-century London did themselves a service or disservice by closing themselves off?

4. The "gentlemen" at Sir Owen’s club put Weaver in the uncomfortable position of having to speak for his entire culture. Have you ever been in a situation where you were the only minority (religious, racial, economic, etc.)? How did it feel to have a group looking at you as the spokesperson for your community? Can you think of any modern parallels?

5. Instead of praising his son, Benjamin, for defending the elderly Mrs. Cantas from anti-Semites, Lienzo strikes him? What did you think of Lienzo’s behavior? What would it be like to live in constant fear of drawing attention to your community? Can you think of any modern parallels?

6. Who do you think was more honorable in his ways of doing business: the criminal Jonathan Wild, or Nathan Adelman? Why?

7. Near the end of the book, Adelman says to Weaver about the murder of Sir Owen, "You need only to believe, Mr. Weaver." And Benjamin answers, "Like the new finance . . .it is true only so long as we believe it is true." What do you think the author is trying to say about the future of the stock market by letting Weaver believe someone he knows is unreliable?

8. Have you ever been caught up in a mania like the South Sea Bubble? What did it teach you about fads? Would you allow it to happen again?

9. As a child, Benjamin idolized boxers for their ability to fight. Compare his physicality to his relatives’ intellectual and financial pursuits. Do you think Weaver’s attraction to boxing was a response to the precariousness of his community?

10. At the end of the book the powerful Adelman comes out on top. Yet he is a member of a disempowered group. Do the many conspiracies in this book ultimately benefit the disenfranchised, or the powerful?

11. Discuss the title A Conspiracy of Paper. Do you think the author used the word "paper" to evoke written histories and novels as well as money? Do you believe that history is written by those who come out on top? How do you think "paper" will fare in our increasingly electronic age?

Learn More About A Conspiracy of Paper
print

The Pursuit of Pearls
Jane Thynne

Murder on the Leviathan
Boris Akunin

The Angel of Darkness: Book 2 of the Alienist
Caleb Carr

Flight of Dreams
Ariel Lawhon
Back to Top