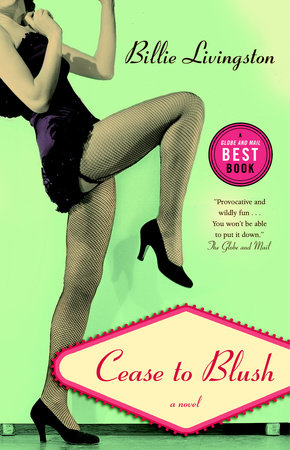 1. Why did Sally give the trunk to Vivian after Josie’s death?

2. The novel opens with Vivian’s story, but then Livingston weaves in the story of Celia’s life (as written by Vivian). How does the one inform the other? Which narrative did you find more compelling?

3. Other than Vivian’s close friend Len, the men is this novel are pretty awful: misogynists, cheaters, exploiters and so on. Even Celia’s father figures are notorious criminals. Does this just reflect the worlds Celia and Vivian live in, or is Livingston doing something more here?

4. Talk about the ways in which many different characters are trapped, and the importance of reinventing oneself.

5. What is Vivian really looking for as she tries to piece together her mother’s past? And even if the truth is elusive, does she find the answers she needs?

6. The novel opens with, and takes its title from, a Marquis de Sade quote: “Women without principles are never more dangerous than at the age when they have ceased to blush.” Vivian thinks about what it means in Chapter 4. How would you interpret the quote, both in general and in terms of this book?

7. Why is Annie West so reluctant to tell Vivian about the past?

8. Many scenes in the novel highlight how feminism has changed over the generations, and the struggles real women have with meeting its expectations (e.g. Josie bleaching her leg hair). Compare the experiences of women like Vivian, Celia/Josie, Annie West, Erin and Sally in this light.

12. Discuss the blurry line between biography and fiction, when it comes to using real people from the past as characters. Do you feel Livingston did a good job of bringing the Rat Pack era to life on the page? Did your opinion of various celebrities from the past change when reading this novel?

13. Why was Vivian with Frank for so long?

14. How has Vivian’s view of her own life changed by the end of the novel? What parallels can you draw between her transformation and Celia’s reinvention as Josie?

15. Josie had always criticized Vivian for not living up to her potential. Why couldn’t Josie just open up about her own past, and use her experiences as a cautionary example?

16. Of all the characters, who did you relate to (or like) the best? On the other hand, who was the least likable, and why?

We Should Not Be Afraid of the Sky
Emma Hooper

Diary of a Void
Emi Yagi

The Making of Her
Bernadette Jiwa

Still the One
Jill Shalvis
Back to Top