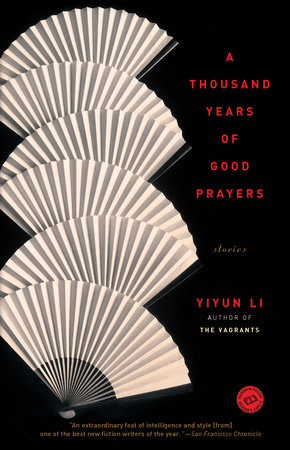 1. For “Extra”
Consider Granny Lin and Kang. How is each an “extra”?
What explains their bond?

2. For “Extra”
Granny Lin cherishes her time with Kang as her “brief
love story” (p. 22). What does she mean by this? Granny Lin
also believes that “to love someone is to want to please him,
even when one is not able to” (p. 19). How does this hold
true in her friendship with Kang? How would you describe
what it means to truly love someone?

3. For “Extra”
Why does Granny Lin think the truth is futile? Discuss
her reaction to Old Tang’s death, and to Kang’s disappearance.
Why doesn’t Granny defend herself? How do other
characters in A Thousand Years of Good Prayers view the possibility
for achieving truth and justice?

4. For “After A Life”
Why did Jian’s birth turn the Sus’s relationship cold, although
the challenge of Beibei’s condition did not? Why
were Mr. and Mrs. Su able to share misfortune, but not happiness?
( 215 )

5. For “After A Life”
Imagine the questions that Mr. Su never gathered the
courage to ask Mrs. Su. What might he want to ask her, in
his deepest heart? Why does he decide, instead, that “things
unsaid had better remain so” (p. 40)?

6. For “After A Life”
Discuss the theme of shame in “After a Life,” and the
many forms it takes in both the Su and Fong families. Does
anyone overcome the weight of shame? Who deals with it
best? Who hides it and remains imprisoned by it? What
roles do honor and dishonor play throughout the entire collection
of stories?

7. For “Immortality”
Describe the identity of the narrator of “Immortality.”
What atmosphere does this collective voice create?

8. For “Immortality”
Assess the complex attitudes of the people toward the
Great Papas, the dictator, and the impersonator. How are
these cultural figures—heroes and villains both—“larger
than the universe” (p. 53) yet vulnerable to time? Do they
achieve immortality in the hearts and minds of the people?

9. For “Immortality”
Yiyun Li presents the history of China through aphorism,
mythology and storytelling. What does one gain from such a
literary portrayal that one does not through history books?

11. For “The Princess of Nebraska”
Sasha believes that “moving on” (p. 69) is an American
concept that suits her well. Do you agree that Americans
have a unique ability to start fresh and forget the past? Do
you see this optimism reflected in other cultures, or would
you agree that it is an American outlook? Later, Sasha says
Americans are “born to be themselves, naïve and contented
with their naivety” (p. 78). Describe the insights behind this
appraisal. Do you agree or disagree? What does this story
reveal about Chinese and American psyches, and how do
these revelations resonate throughout the entire book?

13. For “Love in the Marketplace”
Why does Sansan love the movie Casablanca so dearly?
In what ways does it encompass “all she wants to teach the
students about life?” (p. 95)

14. For “Love in the Marketplace”
Discuss Sansan’s sacrifice. Did she act virtuously or
foolishly? What lies beneath her fierce attachment to the
notion of her own “nobleness” (p. 102)? Later, why is Sansan
so tenderly affected by the beggar in the marketplace, and
his “promise”?

15. For “Son”
Think about Sansan in “Love in the Marketplace,” Han
in “Son,” and Mr. Shi’s daughter in “A Thousand Years of
Good Prayers.” How are the children of this generation in
China, now adults, breaking away from the traditions of,
and duties to, their parents?

16. For “Son”
What moves Han to reveal the long-kept secret of his
sexuality to his mother? Were you surprised by her reaction?
Is Han’s mother as “traditional” as he believes?

17. For “The Arrangement”
Why does Ruolan’s mother refuse a divorce? What is the
“arrangement” that she has worked out with Uncle Bing and
Ruolan’s father?
Uncle Bing says he’s “one of those fools who puts a
magic leaf in front of his eyes and then stops seeing mountains
and seas” (p. 143). What does this mean? Have you
ever fallen victim to a similar preoccupation?

18. For “The Arrangement”
Uncle Bing says he’s “one of those fools who puts a
magic leaf in front of his eyes and then stops seeing mountains
and seas” (p. 143). What does this mean? Have you
ever fallen victim to a similar preoccupation?

19. For “Death Is Not A Bad Joke If Told The Right Way”
What does Mrs. Pang mean when she says “Nobody
knows who he will become tomorrow?” (p. 152) What does
this sentiment reveal about life in China?

20. For “Death Is Not A Bad Joke If Told The Right Way”
Discuss the importance of Mr. Du’s orchids. Why is Mr.
Du happy when they go out of fashion? What do the orchids
mean to him?

21. For “Death Is Not A Bad Joke If Told The Right Way”
Do you think Mrs. Pang have been proud of Mr. Pang at
the end of his life, as the girl believes?

22. For “Persimmons”
Describe the view of life and death that the villagers
hold. Is existence controlled by fate? God? Man? Consider,
also, their attitude toward the possibility for justice.

24. For “A Thousand Years of Good Prayers”
Yiyun Li sets many of her stories in her homeland of
China. What is the spirit of the people like there? What
mood pervades the workers’ lives? How would you describe
the way characters such as Granny Kang, Mr. and Mrs. Su,
Sansan, and Mr. Du, respond to adversity?

25. For “A Thousand Years of Good Prayers”
Discuss your impressions of the world and the characters
that Yiyun Li has created. Draw comparisons and contrasts
between the stories in the collection as a whole.
Which story is the most memorable or the most powerful for
you and why? What themes are woven throughout the entire
collection? What images or feelings emerge when you think
of the collection as a whole?

Learn More About A Thousand Years of Good Prayers
print

The Unknown Errors of Our Lives

The Delight of Being Ordinary

There Are Jews in My House