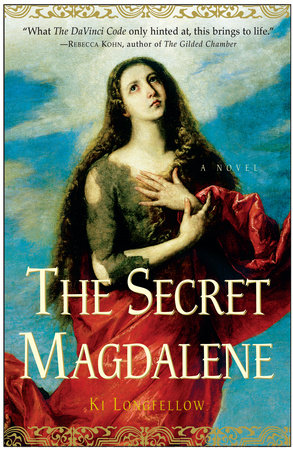 Who was Mary Magdalene? Two thousand years of art and literature have yet to come up with an answer. Ki Longfellow answers this question in her radical retelling of the greatest story ever told, revealing her not as a prostitute or the “Holy Grail” but as an educated woman who took the name John so she might travel with Jesus as his friend and disciple. The Secret Magdalene raises complex questions about religion, the nature of God, the meaning of love, and feminism. This reader’s guide is a starting point for discussion of this unforgettable novel.

1. Are you a religious person? Do you practice a religion? Do novels like The Secret Magdalene, which reimagines the life of a well-known biblical woman with a modern perspective, affect your personal beliefs?

2. Saint. Prostitute. Wife of Jesus. Demon-possessed sinner. What did you know about the life of Mary Magdalene before reading Ki Longfellow’s interpretation in The Secret Magdalene?

3. Is the fact that Mary Magdalene is often remembered as a prostitute–even though there is no biblical text to support this idea–instead of as a dear and trusted disciple of Jesus’ a reflection of the role of women in the early Christian church? What is the prevailing attitude toward women, then and now?

5. What do you know about John the Baptizer as portrayed in the Bible? In terms of his character as portrayed in The Secret Magdalene, how might Christianity have been different if he was the Messiah many believed him to be?

6. Are the inner Nazoreans awaiting a messiah?

7. What is gnosis? Is the concept complimented or contradicted by organized religion?

8. When Mariamne meets Yehoshua (page 118—19) she recognizes him as “the One” the Loud Voice has prophesized, and it is at this time that she and Salome experience the first real parting of the ways. Why? How do their separate beliefs affect their friendship?

9. On page 128 Yehoshua names Mariamne as a danger to him saying, “The danger lies in being known.” In light of later events in the book, what does he mean? Does Yehoshua know something of the fate that awaits them?

10. According to Christian tradition Jesus was an only child; Yehoshua has brothers and sisters, including a twin, Jude. What role does Jude play in Yeshu’s life? On page 388, Jude says “If you are the Messiah, I am the shadow of the Messiah.” What does this mean? How does Jude fulfill the Father’s plan for him by acting as he does in Yeshu’s plans to bring gnosis to the people?

11. The philosopher John the Less seems an unlikely choice to take as the fourth man in the effort to rescue Addai from the hands of the Romans. Why does Yeshu bring him?

12. Yeshu awakens a longing in Mariamne. Although she loves the knowledge and freedom her life as John the Less gives her, does this make her regret the path her life has taken in some way? When Tata tells her she is free of her sex, what does she mean? Is it a good thing or not?

13. What draws Salome to John the Baptizer? Why does she tell him that he will succeed in leading his people to victory when she foresees failure and death for her idol?

14. When Yehoshua finds out that the man he knows as John the Less is really the woman Mariamne he is angry and withdraws from their friendship. Later, he comes to Mariamne at her father’s house seeking to make amends. How does his attitude toward women change as a result of the friendship he and Mariamne shared? How does this change of heart influence his teaching?

15. How is John the Baptizer’s death a turning point in Yeshu’s life? In Mariamne’s?

16. Salome is tormented by guilt after John’s death, but would John have come to a different end without her?

17. As Mariamne, Jude, and Yeshu travel around spreading the message of gnosis, Yeshu gains a reputation as a healer. Does this help him? How does it hurt him?

18. How is Mariamne’s life changed when she returns to living as a woman? In what ways is it the same?

19. On pages 290—291 Yeshu raises Eleazar (Lazarus) from the dead but not in the way it is depicted in the Bible. In what way is Eleazar risen from the dead after his meeting with Yeshu?

20. Frustrated by a lack of progress, Yeshu decides that the only way to bring gnosis to the people is to become the Messiah they seek. With his closest friends he plans the crucifixion according to prophesies found in scripture. Why would he make this sacrifice? Does his plan work?

21. After Yeshu is Risen and Mariamne meets Simon Peter at the tomb he swears to erase her role in Yeshu’s life from the minds of men. Why?

Knights of the Black and White
Jack Whyte

The Ruby in Her Navel
Barry Unsworth

The Mistress of Husaby
Sigrid Undset

The Silver Chalice
Thomas B. Costain

Cranford
Elizabeth Gaskell
Back to Top