A Song I Knew By Heart Reader’s Guide 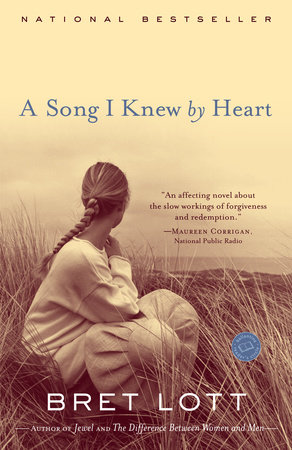 A Song I Knew By Heart Reader’s Guide

print
A Song I Knew By Heart Reader’s Guide

1. Read the story of Naomi and Ruth from the Bible. How does an understanding of the biblical story help to illuminate the relationship between the two women in the novel? In what ways are the two stories different?

2. Naomi knows that she must return to South Carolina when she remembers the light of her childhood home, which is different from the light in the North where she lived as an adult. Why do you think it is the memory of the light that pulls her back? What do you think the light symbolizes, not just in this instance but throughout the novel?

3. Why do you think Ruth decides to go to South Carolina with Naomi, even though it is not her home? Why does she say, “Where you go, I will go. Where you live, that’s where I’ll live too. This is a pact between us. Here. Now” (p. 97)?

4. Variations on the title A Song I Knew by Heart appear throughout the novel. What is the significance of the title in the beginning of the novel, and does your understanding of it change throughout the book?

5. The lives of Naomi and Ruth are filled with many of the rituals of daily life. One that plays an especially important role between the two of them is the baking of biscuits, a recipe that was passed down to Naomi and one that she has passed along to Ruth. Why do you think this act is so important between the two women? Explore some of the other daily rituals that appear throughout the novel and how they play an important role in bringing the characters closer.

6. Even though the book opens with the death of Mahlon and the remembrance of Eli’s death, A Song I Knew by Heart is in many ways a love story. It tells of the love between Naomi and Eli and Ruth and Mahlon. What other love stories are told? What other types of love are revealed?

7. Why do you think Ruth decided to betray her husband with Lonny Thompson? How do you understand Eli never telling her that he knew what she did? What other betrayals occur in the novel?

9. Naomi wears a locket around her neck. Why is it so special to her? What does the locket hold at different points in the novel? What does it mean when Ruth gives Naomi her ring, and why does Naomi put it with her locket?

10. After having finished the novel, how do the epigraphs at the beginning of the novel enrich your understanding of the story as a
whole?

11. This story is filled with loss, but each loss gives way to a new beginning, a new relationship. Even the beginning of the relationship between Naomi and Eli when they returned from their first walk was punctuated with the news of her brother’s death in the war. In what other instances does death make a new beginning possible?

12. What role does memory and the act of remembering play in this novel? Naomi remembers her life with Eli, and cherishes many of the private moments they shared, like when they told each other “Nice to meet you.” Why do you think she urges Ruth to keep her memories of Mahlon private? Do you agree with Naomi? Are memories things that can be owned? Why, or why not?

13. What is the relationship between memory, loss, and forgiveness in A Song I Knew by Heart?

14. “When we are young, it means, I have made a mistake. When we are old, it means, I have separated myself from love” is how Naomi describes sin (p. 77). Do you agree with her? How does her understanding of sin affect the course of the novel? How do she and the other characters in the novel separate themselves from love? In what ways do they embrace it?

15. There are many quilts throughout the story—the wedding ring quilt given to Naomi for her wedding, the quilt given to her before she leaves to return home. Why do you think the author chose quilts? What is it about quilts and quilting that lends itself to a deeper understanding of relationships and love?

16. How do you understand the incident at Harris Teeter when Naomi witnessed Ruth first meet Beau? Why do you think Ruth was so uncomfortable? Why do you think Naomi encourages Ruth to go to Beau? What is the significance of giving Ruth the quilt before she meets Beau at the firehouse?

17. Naomi wonders what her name can mean, what it contains. Often she feels that it is emptiness, that she is empty. She contemplates the names she is called, like Aunt Naomi. What is she accomplishing in trying to understand her own name? At the very end of the novel, she asks, “Why call me Naomi?” and she answers, “My name is Naomi. And I am filled” (p.303). How has she come to this place in her life? How does she understand herself differently? What has allowed her to be filled?

Learn More About A Song I Knew By Heart
print

The Flaw of Love

Parallel Play
Back to Top