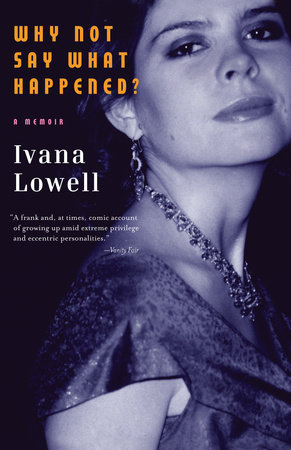 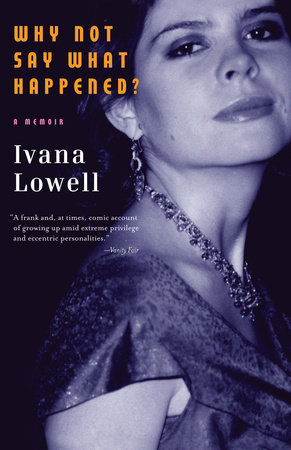 About Why Not Say What Happened?

Born into one of the most celebrated Anglo-Irish families, the Guinnesses, Ivana Lowell grew up at the whim of two literary heavyweights—her mother, writer Lady Caroline Blackwood, and stepfather, poet Robert Lowell.

Now, with an incisive eye and a wicked sense of humor, she shares the stories we’ve always wanted to hear. She tells of following the famous authors from one crumbling, drafty country house to another, and of summers spent with madcap relatives such as her maternal grandmother, the Marchioness of Dufferin and Ava, and her “old friend,” the Queen Mother. But Ivana also has darker stories to tell: about her childhood accident, about her own stints in rehab, and, finally, about discovering the secret Lady Caroline had successfully kept from Ivana her entire life.

About Why Not Say What Happened?

An astonishing and at times outright comic memoir that marks the brilliant debut of a writer raised in a creative, bohemian household characterized by extreme privilege tinged with neglect.

Born into one of the most celebrated Anglo-Irish families, the Guinnesses, Ivana Lowell tells a stunning story of coming to terms with her blue-blood heritage and her own childhood traumas. It is also the story of her intense relationship with her formidably intelligent and complicated mother, the writer Caroline Blackwood. A keen observer with an incisive eye, a wicked sense of humor, and no self-pity, Lowell sets a wide range of scenes with a truly unexpected, almost madcap cast of characters, introducing us to such eccentric figures as her maternal grandmother, Maureen, the Marchioness of Dufferin and Ava. She takes us from the marchioness’s annual ball for her idol and old friend, the Queen Mother, to Maureen’s stately Irish home, Clandeboye (where the marchioness hopes to die), to summers in Dufferin’s villa in Sardinia; through moves to carelessly furnished, drafty, too-large English country houses with her mother and stepfather, the poet Robert Lowell; to working in Manhattan at Miramax Books for Harvey Weinstein and a trip with his brother, Bob, to the Academy Awards; to her wedding at New York’s Rainbow Room and finally to a life with her daughter. Ivana also has darker stories to tell including her own stints in rehab, and discovering, after her mother’s death, the secret Lady Caroline had successfully kept from her.

Why Not Say What Happened? introduces a dazzling new literary voice and the fascinating story of a tragic and remarkable family.

Ivana Lowell grew up in London, Boston, and New York. She now lives in Sag Harbor with her daughter.

Ivana Lowell grew up in London, Boston, and New York. She now lives in Sag Harbor with her daughter.

“A frank and, at times, comic account of growing up amid extreme privilege and eccentric personalities.” —Vanity Fair

“A riveting history of a family that folds in on itself, consuming generation after generation. . . . Lowell’s compact, finely tuned paragraphs render the saga with brave urgency and courage.” —Elle

“Lowell movingly shows how a child’s love can transcend a parent’s flaws. Her empathy with her mother may be her greatest gift.” —The New York Times Book Review

“For a woman whose legacy carries an enormous fortune, a family tree cluttered with renown, and unparalleled eccentricity, Ivana Lowell is shockingly all right. . . . An impeccable memoir.” —The Daily Beast

“Ivana Lowell’s memoir is a heart-breaking account of a gifted woman, her brilliant but destructive parents, and a glamorous, aristocratic life that was laced with arsenic. That she survived and now shines as literary force in her own right is apparent from the very first page. Why Not Say What Happened? is a tour de force.” —Amanda Foreman, author of Georgiana: Duchess of Devonshire

“Compelling. . . . Careless hardly covers the reckless disregard with which these people treated those they supposedly loved.” —The Boston Globe

“Lowell takes her spot in the pantheon of modern-day heiresses with this memoir about her unbelievable life.” —More

“Will no doubt raise eyebrows. Lowell spares few details in recounting her dysfunctional childhood, which was spent in grand houses and fancy apartments, where the family lived more like hillbillies than titled Brits.” —W

“Lowell’s true achievement may lie in the unassuming way she communicates the resilience of a woman whose trials—she was sexually abused at six by her nanny’s husband, was severely burned in a childhood kitchen accident and has struggled for decades to conquer alcoholism—might have done in most people.”  —The New York Times

“An exhilarating roller-coaster ride of a book, full of the sort of wonderfully terrible secrets writers seldom have the guts to tell, let alone with such an assured and beguiling candor—but then of course, Ivana’s Irish and a born writer .”  —John Richardson, author of A Life of Picasso

“[Lowell’s] recollections of sexual abuse, a disfiguring childhood accident, rampant neglect, and alcoholism—as well as her lifelong quest to discover her true paternity—could have made for grim reading, but Lowell’s writing remains conversational and refreshingly free of self-pity.” —Entertainment Weekly

“At its heart, Why Not Say What Happened?, whose title comes from one of Robert Lowell’s final, bleakest poems, is a portrait of a family in freefall, a mother and her four children floating through a dizzying succession of grand but rotting houses while enduring absent fathers, sexual abuse, mental breakdown, severe injury, alcoholism and the deaths of loved ones. The only thing fending off complete devastation is the author’s gleefully black sense of humor.” —The Telegraph (London)

“With walk-on parts from everyone from the Queen Mother and artist Lucian Freud to film mogul Harvey Weinstein, this book is packed with color. A brilliant memoir.” —Voyager

“[Ivana] tells her story with verve and wit, and I loved every minute of it.” —Ann LaFarge, Hudson Valley News

“Shocking and hilarious, this elegantly lucid memoir by Ivana Lowell is that lethal mix of British aristocracy, giant fortunes, huge freezing houses, beautiful women jagged with sophistication, pedophilia, mysterious paternity, cruelty and yes, cocktails. We are reminded of the plays of Oscar Wilde and novels from Ronald Firbank to Evelyn Waugh as we are introduced to a lively and unlikely mix that includes the Queen Mother and Harvey and Bob Weinstein. . . . Lowell is impressive and touching in sparing us none of this tragicomedy, least of all herself.” —Mike Nichols

Looking for More Great Reads?
21 Books You’ve Been Meaning to Read
Download Hi Res
Why Not Say What Happened?