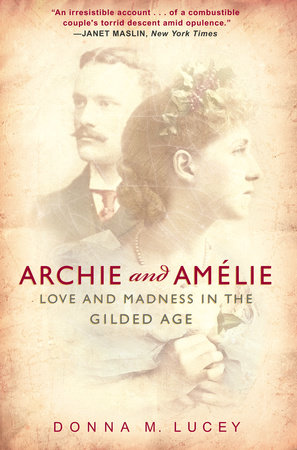 1. The subtitle of the book is “Love and Madness in the Gilded Age.” What do you think of the love affair between Archie and Amélie? Do you think Amélie married Archie because of his money and social position? Do you think she ever loved Archie? Likewise, do you think Archie truly loved Amélie, or was he just enthralled by the idea of marrying a seeming goddess? Which of the two characters do you find more sympathetic?

2. Amélie’s bestselling fiction was largely concerned with the war between the sexes. Though very tame by present-day standards, her writings scandalized the public because her female characters dared to express sexual desire. In real life, Amélie felt very conflicted about sex. What do you think of this ambiguity? Do you think she ever actually consummated her marriage with Archie?

3. Amélie always tried to present herself as an innocent naïf, victimized by those who misunderstood her and her work. Do you think she was an innocent victim, or was she the one in complete control? What about the limitations placed on women at that time? Was she merely trying to push the boundaries of what was acceptable for women, and did she suffer the consequences of that effort? Do you find anything noble in that struggle?

4. Over the years Amélie suffered horribly from “neuralgia of the brain,” headaches, and finally drug addiction. At that time morphine was commonly prescribed for symptoms like those Amélie endured. For “hysterical” women like Amélie, one of the common medical treatments was the “rest cure,” which is described on pages 165—166. Does this give you an insight into the way that women were treated as if they were a species apart from men? Does this make you more or less sympathetic to Amélie’s plight?

5. Archie also struggled against the accepted code of behavior when he began his psychic experiments. Do you think his family was justified in committing Archie to the insane asylum against his will? Do you think they were genuinely concerned about his mental well-being or more concerned about the family finances? Do you think that all of the siblings truly believed Archie was insane, or was this primarily a vendetta by his brother Winty, who was deeply involved in the creation of the mill town of Roanoke Rapids? What do you think about Stanford White’s role in Archie’s commitment?

6. Being orphaned at a relatively young age had a profound effect on Archie. As heirs to the Astor fortune, the Chanler children inherited a great deal of money; yet the Guardians who made all of the decisions about the orphans and their upbringing seemed more concerned about saving money than about the emotional well-being of the children. (Archie, for instance, was not allowed to return from England for two years after he had been orphaned.) Do you think the extreme loneliness and grief that Archie endured as a boy made him incapable as an adult of forming a healthy relationship?

7. Archie was a restless searcher his whole life. What exactly was he searching for? Do you think that Amélie was the best thing or the worst thing that ever happened to him?

8. Archie never got over Amélie and even continued to support her after they divorced and she remarried. This made him the object of ridicule in some quarters, but he did not care what anyone thought. Do you think his obsession with Amélie pushed him over the edge into mental illness?

9. Amélie certainly suffered from mental anguish. For long periods of time she took to her bed with unspecified maladies, and yet she also had a very grandiose sense of her own self (see her self-portrait in the photo insert). Do you think these extremes indicated an underlying mental illness?

10. At least one man committed suicide over Amélie, and she attracted an endless stream of worshipful suitors. Drawing a voluptuous portrait of herself on the day that Lord Curzon came to visit seemed to be a provocative act in itself. What do you think of Amélie’s deep-seated need to be adored?

11. Marriage among the upper class in the Gilded Age was often more a business transaction–a way to combine or acquire fortunes–than a relationship based on love. In 1897 Amélie gave a newspaper interview in which she extolled the virtue of a marriage based on companionship and mutual respect. A woman should aspire to be the “wife-friend” of a husband, rather than a “wife-chattel” or “wife-vassal,” in her words. What do you think of her second marriage to the painter Prince Pierre Troubetzkoy?

12. It took Archie nearly twenty years of legal fighting before he was declared legally sane in New York and able to reclaim control of his fortune. Archie then proceeded to spend all of his money on national campaigns such as keeping farmers on the land and reforming the “lunacy laws,” as well as spending it on the entertainments he created on his own Virginia estate for the pleasure of all his neighbors. Do you think these actions indicated that Archie was insane after all, or was he just very civic-minded and generous?

13. In many ways Amélie resembled Scarlett O’Hara of Gone with the Wind, for like Scarlett’s obsession with her family’s plantation Tara, Amélie was determined to save Castle Hill at all costs. By the end of her life Castle Hill was in tatters and Amélie had lost her youth and beauty–a tragedy for a woman whose whole self-worth was bound up in her physical allure. Do you think Amélie had changed at all by the end of her life? Do you think she looked back and regretted the way she had used people in order to get what she wanted?

14. Archie and Amélie were both highly educated and had deep intellectual curiosity and talent, yet they were also larger-than-life celebrities whose every move was covered by the press. If you had to compare them to a modern celebrity couple, whom would you choose?

Rage for Fame
Back to Top