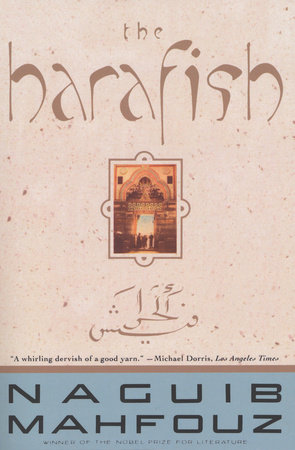 There are nineteen works of fiction currently available in paperback from Anchor.  Because of the many universal themes of Mahfouz’s work, and the variety of titles from which one can choose, this guide has been designed to provide you with questions that can apply to any or all of the books by Mahfouz which you choose to read.   The questions offer new perspectives and context for your conversations.


Although each of Mahfouz’s novels is a unique reading experience, in an effort to guide you in making a selection, it is suggested that you might particularly be interested in one of the four following titles, each of which represents a different decade of his career:  Palace Walk (1956), Midaq Alley (1966), The Harafish (1977), and The Journey of Ibn Fattouma (1983).  For your convenience, a complete listing is included in this guide.

Concern with social issues prevails in Mahfouz’s realistic novels. His fictional characters come largely from the lower-middle-class stratum of Cairene society and many of them bear clear autobiographical marks. In fact, many of the novels themselves bear the names of the quarters of historical Cairo in which Mahfouz grew up. Many of Mahfouz’s plots enact a search for upward mobility in a society severely strained by socio-economic stratification. The quest, however, is seldom successful. Telling familiar stories in ever-changing, freshly nuanced ways is a major characteristic of Mahfouz’s works and a key to understanding his widespread popularity in the Arab world. In his novels, the universal is packaged in the concrete details of local color and specific national setting.
Learn More About The Harafish
print

Adrift on the Nile

The Beggar, The Thief and the Dogs, Autumn Quail

The Yoga of Max’s Discontent
Back to Top