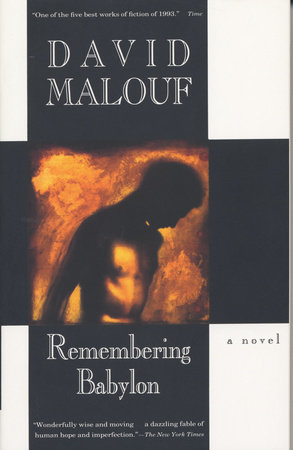 The questions, discussion topics, and author biography that follow are intended to enhance your group’s reading of David Malouf’s Remembering Babylon. We hope they will aid your understanding of a novel that presents readers with the verbal energy of a prose poem (and with some of the finest nature writing since D. H. Lawrence’s), a psychological discernment worthy of Virginia Woolf, and the thematic resonance of an Australian Genesis.

In the case of Remembering Babylon, the myth is that of the settling of Australia and of the fateful contact between white Europeans and black aborigines. That contact–and all its tragic repercussions and missed possibilities–is represented by the sudden appearance, in an unnamed Queensland settlement in the 1840s, of Gemmy Fairley, an English castaway who was rescued by aborigines and has lived among them for sixteen years before crossing into the territory claimed by his countrymen. With his sun-blackened face and straw-white hair, his twitching gait and few, inarticulate scraps of English, Gemmy is a confusing–and increasingly suspicious–figure to his new hosts. On a practical level, some settlers fear that Gemmy is a spy sent by the aborigines, who are thought to have massacred settlers elsewhere in the new territory. But he also represents the dread possibility that civilization, language–whiteness itself–are qualities as provisional as their farms and tumbledown shacks. Looking at Gemmy, they find themselves wondering, “Could you lose it? Not just language but it. It.” [p. 40]In time these suspicions prove too great, the gulf between cultures too insurmountable: Gemmy is beaten and driven away. His few allies, the Scots farmer Jock McIvor, his nephew Lachlan Beattie, his elder daughter Janet, and the botanizing Reverend Frazer, are permanently estranged from their community–and indeed, from their ingenuous former selves. In that outcome, David Malouf sees a fall from grace that has implicated succeeding generations of European Australians, a loss of the potential self embodied in this “in-between creature” [p. 28] who was neither wholly white nor wholly black but “a true child of the place as it will one day be.” [p. 132] Drawing on the true story of Gemmy Morril, Malouf has created a haunting, melancholy, and stunningly written parable of the limits of imagination and the intractibility of human nature, of the moment in which two peoples met on the ground of a new world–and one of them turned away.

1. Malouf tells his story in an intermittent and at times circuitous manner. Typically, he reports the essentials of an incident, traces its repercussions through different witnesses, and then returns to fill in its missing details–particularly, the actions and motivations of his central character. Where else does Malouf employ this narrative strategy? What does he accomplish by telling his story from shifting points of view and by withholding critical revelations?

2. In contrast to his use of multiple points of view, the author employs a stable and somewhat distanced narrative voice. That voice can express profound and often lyrical insights into each of the novel’s characters, yet it belongs to none of them. How does the tension between a fixed, omniscient voice and shifting, limited points of view affect your perception of the novel’s events?

3. Lachlan and his cousins first encounter Gemmy while pretending to hunt wolves on the Russian steppes. What irony is implicit in this game? Where else in Remembering Babylon do characters behave as though they were somewhere other than the Queensland bush? What are the consequences of this tendency?

4. Lachlan “captures” Gemmy with an imaginary weapon, a stick masquerading as a gun. Why does Gemmy surrender? What power does he recognize in this object and in the gesture that animates it? Where else in Remembering Babylon do simple objects acquire magical power?

5. To the children, the landscape from which Gemmy emerges is “the abode of everything savage and fearsome, and since it lay so far beyond experience, not just their own but their parents’ too, of nightmare, rumours, superstitions and all that belonged to Absolute Dark.” [p. 3] How is this initial description amplified or altered in the course of the novel? At what moments does the landscape seem to physically permeate its inhabitants, as, for example, on page 18, where Abbot feels his blood beating in unison with the shrilling of insects in the bush?

6. How do Gemmy and his aboriginal rescuers view the same landscape? What language does Malouf use to convey their differing perceptions? Which vision of the land triumphs by the novel’s climax? At what points–and through what agency–do some of the novel’s English characters come to see the Australian terrain as Gemmy does?

7. Gemmy’s first words are “Do not shoot. I am a B-b-british object!” [p. 3] What does it mean to be an object rather than a subject? What meanings accrue to this phrase in light of Gemmy’s experience as a child in England–and as a man-child in a white settlement in Australia?

8. Gemmy returns to his countrymen at a certain moment in Australian history, at a time when settlement in Queensland has advanced only halfway up the coast and many villages–including the one in which the action unfolds–are still unnamed. How has Australia changed by the novel’s climax? What is the implied relation between Gemmy’s fate and the progress of Australian history?

9. The fact that Gemmy is first seen balanced precariously on a fence is indicative of his status as an “in-between creature” [p. 28], poised between European and aboriginal identities. How does Gemmy’s treatment by the aborigines both parallel and differ from his treatment by Englishmen? How does Gemmy view himself? What other hybrids or transitions does he embody?

10. Language plays a critical role within this novel, beginning with Gemmy’s sense that the words in which Abbot transcribes his story contain “the whole of what he was” [p. 20]. At what other points in the book does the spoken or written word act as a magical shorthand, one that not only connotes but invokes and transforms reality? How does Malouf’s prose style mirror this effect? How does the novel’s sense of language parallel its vision of objects and landscape?

11. It is tempting to see Gemmy as an innocent. But has Gemmy merely stumbled into colonial territory or has he come there with a purpose–and, if so, what is it? Is your earlier sense of Gemmy altered by the discovery that, as a boy in England, he may have killed his master?

12. Behind every imposture lies a second self. In Gemmy’s case, that other self is the one that lies dormant during his life with the aborigines and that first surfaces when he tastes the mash that Ellen McIvor is throwing to her chickens [p. 31]. How does Malouf describe the interplay between his characters’ different selves? Which of his characters realize their inner selves by the novel’s end?

13. In the course of Remembering Babylon, certain characters change, not only in relation to Gemmy, but in relation to each other. Where, and in whom, do these changes occur? To what extent is Gemmy the cause of these transformations?

14. Repetition is an essential part of this novel’s structure. It is not just that certain incidents–Gemmy’s fall from the fence, his meeting with the aborigines–are narrated from different points of view. In Remembering Babylon episodes and objects have a way of doubling. What is the effect of these multiplications? How do they constitute a cyclical counterpoint to the linear progression of the narrative?

15. By the simple fact of his presence, Gemmy divides his hosts into two camps: those who tolerate and in time love him, and those who are determined to drive him away. What is it that distinguishes Gemmy’s protectors from his tormentors? What qualities do the two groups have in common?

16. Although Malouf tells his story from multiple points of view and tells us much about characters as diverse as a thirteen-year-old boy, a middle-aged farm wife, and an otherworldly parson, he leaves his aboriginal characters enigmas. We know them only through Gemmy, who has lived among them but is not entirely of them. Why might Malouf have chosen to do this? What is the effect of this gap in the novel’s psychological fabric?

17. Nature is one of this novel’s central mysteries, not only in the form of the land, with its strange life-forms and reversed seasons, but in its human aspect. The Reverend Frazer describes Gemmy as someone who “has crossed the boundaries of his given nature.” [p. 132] What vision of human nature does Remembering Babylon present? What is the implied relationship between human nature and the natural world?

18. What is the “Babylon” of this novel’s title? What “Jerusalem” does Malouf suggest as its counterpart?

David Malouf has written that he was “born and grew up in Edwardian England, a fact that has somehow got itself recorded in the real world as Brisbane, Australia, in 1934.” The son of a Lebanese Christian and an English Jew of Portuguese descent, he came of age at a time when Australia patterned itself entirely on English lines: “I lived on the beach, surfing, swimming, active, in a place with a particular kind of light, a particular kind of moisture in the air, a particular sky. Everything local belonged to the sensory world. But everything cultural was English. Until 20 or 30 years ago everyone was still referring to England as ‘home.'” That paradox has preoccupied much of Malouf’s fiction, which in turn has inspired two generations of Australian writers. Known as a poet and librettist as well as a novelist, Malouf is the author of 14 books, including An Imaginary Life, Fly Away Peter, Harland’s Half Acre, Antipodes, and the international bestseller The Great World. His work has been awarded the Pascall Prize, the Miles Franklin Award, the Age Book of the Year Award, the New South Wales and Victorian Premier’s Award in Australia, along with the Commonwealth Prize and France’s Prix Femina Etranger. Remembering Babylon was nominated for the 1993 Booker Prize. David Malouf lives in Brisbane, Australia.