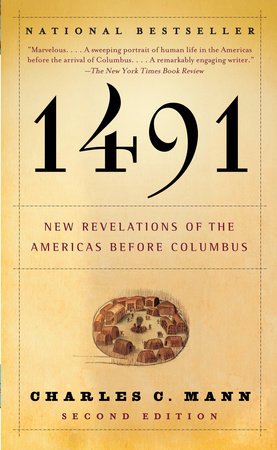 “Marvelous. . . . A sweeping portrait of human life in the Americas before the arrival of Columbus. . . . A remarkably engaging writer.”
–The New York Times Book Review

The introduction, discussion questions, suggested reading list, and author biography that follow are intended to enhance your group’s conversation about 1491, Charles Mann’s compelling and wide-ranging look at the variety, density, and sophistication of the cultures in the Western Hemisphere before the arrival of Columbus.

1491 is a groundbreaking study that radically alters our understanding of the Americas before the arrival of the Europeans in 1492, and a necessary book for understanding the long, remarkable story of the indigenous peoples of the Western Hemisphere.

Traditionally, Americans have been taught that the ancestors of the people who inhabited the Western Hemisphere at the time of Columbus’s landing crossed the Bering Strait thirteen thousand years ago, existed mainly in small, nomadic bands, and lived so lightly on the land that the Americas were, for all practical purposes, still a vast wilderness. But in fact, in 1491 there may well have been more people living in the Americas than in Europe, many of them in urban complexes bigger and more sophisticated than London or Paris. Older, too: Indian cities were thriving before the Egyptians built the great pyramids. Native people of the Americas developed ways of breeding corn and using the land that were far ahead of other civilizations. In the Amazon, Indians learned how to farm the rain forest without destroying it–a process scientists are studying today in the hope of reviving the practice. 1491 is full of new knowledge about the pre-Columbian Americas that will utterly change readers’ visions of the past.

1. Mann begins the book with a question about our moral responsibility to the earth’s environment: Do we have an obligation, as some green activists believe, to restore environmental conditions to the state in which they were before human intervention [p. 5]? What does the story of the Beni tell us about what “before human intervention” might mean?

2. What scientists have learned about the early Americas gives the lie to what Charles C. Mann, and most of us, learned in high school: “that Indians came to the Americas across the Bering Strait about thirteen thousand years ago, that they lived for the most part in small, isolated groups, and that they had so little impact on their environment that even after millennia of habitation the continents remained mostly wilderness” [p. 4]. What is the effect of learning that most of what we have assumed about the past is “wrong in almost every aspect” [p. 4]?

3. There are many scholarly disagreements about the research described in 1491. If our knowledge of the past is based on the findings of scholars, what happens to the past when scholars don’t agree? How convincing is anthropologist Dean R. Snow’s statement, “you can make the meager evidence from the ethnohistorical record tell you anything you want” [p. 5]? Are certain scholars introduced here more believable than others? Why or why not?

4. Probably the most devastating impact from the contact between Europeans and Americans came from the spread of biological agents like smallpox. Of Mann’s various descriptions of the effects of foreign diseases on the Americas’ native populations [pp. 96—124], which are most shocking, and why? How do you respond to his questions on page 123: “In our antibiotic era, how can we imagine what it means to have entire ways of life hiss away like steam? How can one assay the total impact of the unprecedented calamity that gave rise to the world we live in?”

5. In the nineteenth century, historian George Bancroft described pre-contact America as “an unproductive waste. . . . Its only inhabitants were a few scattered tribes of feeble barbarians, destitute of commerce and of political connection” [pp. 14—15]. To what degree is the reflexive ethnocentrism of earlier times responsible for the erroneous history of the Americas we have inherited?

6. When Spanish explorer Hernando De Soto brought pigs along on his expedition in order to feed himself and his men, the pigs carried microbes that apparently wiped out the Indian populations in the southeast part of the current United States [p. 108—09]. While this episode illustrates the haphazard quality of biological devastation, how does it also connect 1491 to our contemporary world, in which the media reports daily on scientists’ fear of diseases like avian flu jumping from animal to human populations? In our present global environment, are we as vulnerable as the Indian tribes discussed by Mann? Are there, as he suggests, moral reverberations to be felt as a result of the European entrance into the Americas five centuries ago [p. 112]?

7. Several of the cultures discussed by Mann honored their dead so highly that, in effect, the dead were treated as if they were still alive. What is most interesting about the attitudes toward death and the dead found in the Chinchorro [pp. 200—01], the Chimor [p. 264], and the Inka [p. 98] cultures?

8. Much of America’s founding mythology is based on the idea of the land as an untouched wilderness, yet most scholars now agree that this pristine myth [p. 365] was a convenient story that the early settlers told themselves. What kinds of actions did the myth support, and how did it serve the purposes of the settlers?

9. Because of the lack of documentary and statistical evidence for the mass death caused by disease in the New World, experts have argued about the size of the pre-Columbian population. The so-called High Counters, according to their detractors, “are like people who discover an empty bank account and claim from its very emptiness that it once contained millions of dollars. Historians who project large Indian populations, Low Counter critics say, are committing the intellectual sin of arguing from silence” [p. 112]. Yet those who count low, Indian activists say, do so in order to diminish not only the mass death suffered by indigenous peoples, but also the significant achievements of their pre-contact cultures. Which side does it seem Charles Mann leans toward? Which side do you find more believable?

10. Consider Mann’s remark about what was lost because of the destruction wrought by Cortés and others: “Here, at last, we begin to appreciate the enormity of the calamity, for the disintegration of native America was a loss not just to those societies but to the human enterprise as a whole. . . . The Americas were a boundless sea of novel ideas, dreams, stories, philosophies, religions, moralities, discoveries, and all the other products of the mind” [p. 137]. How might the world have been different had the ancient cultures of the Americas survived into the present?

11. Mann writes, “Native Americans were living in balance with Nature–but they had their thumbs on the scale. . . . The American landscape had come to fit their lives like comfortable clothing. It was a highly successful and stable system, if ‘stable’ is the appropriate word for a regime that involves routinely enshrouding miles of countryside in smoke and ash” [p. 284]. Why did the Indians burn acres of land? Does Mann suggest that there are the ecological lessons for our own time in the Native Americans’ active manipulation of their environment?

12. Using the words of Harvard biologist Edward O. Wilson, Mann explains that a “keystone” species is one “that affects the survival and abundance of many other species”; Mann adds that, “Keystone species have disproportionate impact on their ecosystems” [p. 352—53]. Indians were a keystone species in most of the hemisphere before the arrival of Columbus. What force led to their greatly diminished importance in the evolution of the hemisphere’s ecosystems? If our species now has an even greater impact on the world ecosystems, does Mann suggest ways to avoid disasters such as those he delineates in 1491?

13. Discussing foreign environmentalists’ opinions about saving the Amazonian forests, Mann raises a problem with the whole environmental movement: Those in poverty-stricken areas like Amazonia want development and jobs; wealthy, well-educated people in the U.S. and Europe tend to want to preserve these forests [pp. 363—64]. How can this problem be resolved?

14. The Gitksan Indians of Canada’s Northwest have argued a case in the Supreme Court of Canada that “the Gitksan had lived there a long time, had never left, had never agreed to give their land away, and had thus retained legal title to about eleven thousand square miles of the province” [p. xi]. What are the implications of such a claim for the various peoples and tribes that Mann discusses in 1491, and for the descendants of European settlers?

15. What does Mann mean in saying, “Understanding that nature is not normative does not mean that anything goes. . . . Instead the landscape is an arena for the interaction of natural and social forces, a kind of display, and one that like all displays is not fully under the control of its authors” [p. 365—66]?

16. People have long believed that being in the wilderness conveys a sense of the sacred. Mann explains, “The trees closing over my head in the Amazon furo made me feel the presence of something beyond myself, an intuition shared by almost everyone who has walked in the woods alone. That something seemed to have rules and resistances of its own, ones that did not stem from me” [p. 365]. What happens to this idea of a non-human force in nature if, as Mann concludes, the concept of nature is a human creation?

17. Why does Mann end 1491 with a coda on the Haudenosaunee “Great Law of Peace,” and what resonance does it have for the book as a whole?

Charles C. Mann is a correspondent for Science and The Atlantic Monthly and has co written four previous books including Noah’s Choice: The Future of Endangered Species and The Second Creation. A three-time National Magazine Award finalist, he has won awards from the American Bar Association, the Margaret Sanger Foundation, the American Institute of Physics, and the Alfred P. Sloan Foundation, among others. His writing was twice selected for both The Best American Science Writing and The Best American Science and Nature Writing. He lives with his wife and their children in Amherst, Massachusetts.

The Name of War

The Earth Is Weeping
Back to Top