Rules of the Wild Reader’s Guide 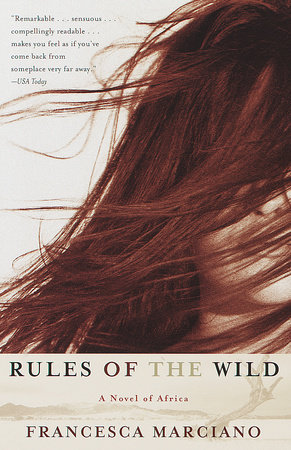 Rules of the Wild Reader’s Guide

The questions, discussion topics, and suggested reading list that follow are designed to enhance your group’s experience of reading Francesca Marciano’s Rules of the Wild. We hope they will give you many new ways of approaching this romantic and beautiful story in the tradition of Out of Africa and West with the Night.

Rules of the Wild tells the dramatic tale of Esmé, a young Italian woman torn between two cultures and two lovers. After the death of her beloved father, feeling estranged from her own roots in the hyper-civilized society of Naples, Esmé flees to Africa. She is soon seduced by the land’s vast emptiness and healing beauty, and decides on a whim to make her home there. Before long she is caught up in the strange world of expatriates in Kenya, living side-by-side with, yet oddly separate from, their African neighbors. Her vision of her adopted continent undergoes a series of changes as she begins to see it through the eyes of the two men in her life: Adam, the gentle safari leader, born in the wild and thoroughly at home there; and Hunter, the bitter and cynical war correspondent who, as witness to the genocidal warfare of Rwanda, has acquired an entirely different perception of Africa. As time goes on Esmé learns, with pain and joy, to understand herself, her heart, and the powerful love that has drawn her to Kenya and keeps her there.

1. How have Esmé’s parents, and her native country, helped to make her what she is? Why might someone from her background be especially liable to see a promise of redemption in the vast spaces of Africa?

2. What do the names of Esmé’s two lovers, Adam and Hunter, tell us about them? How does each man’s name define his role in Esmé’s life?

3. Adam has one view of Africa; Hunter has a radically different one. Which of the two views do you find the most potent and persuasive? Is it possible to hold both views simultaneously; that is, to love and believe in the pristine natural beauty of Africa while also acknowledging its cruelty and inequity?

4. Frustrated with her life as a white person in Africa, Esmé complains at one point: "We’re like ghosts here; we can’t contribute to anything, we don’t really serve any purpose. We don’t believe in this country. We are here only because of its beauty. It’s horrifying" [p. 10]. Do you agree with this general assessment of the various characters’ lives? If not, in what way is she wrong?

5. Esmé asks Nicole, "why is it that after so many years we don’t have any African friends" [p. 10]? Does that question get answered during the course of the book? What is the answer?

6. Esmé and Nicole look at shopping as therapy, "frivolity as the ultimate form of rescue" [p. 42]. Yet when they come home, they guiltily remove the price tags from their purchases so that the servants won’t compare their employers’ spending power with their own. If Esmé and Nicole feel so uncomfortable, why don’t they simply pay their servants more? How have they allowed themselves–liberal Europeans–to take part in an economic situation that might once have seemed exploitative to them?

7. How does the white Kenyans’ awareness of the atrocities taking place in nearby Rwanda affect their lives and their consciousness? Do the events provoke in them fear, pity, terror, disgust, or denial?

8. How have the experiences of Hunter’s parents affected his life and his attitudes? Is it because of his unusual history that he seems more caught up in the human tragedies going on in Africa than most of his friends, or even than his colleagues?

9. The novel’s characters occasionally talk about an Out of Africa fantasy that many of them are trying to live out. In what does this fantasy consist? Is it based on real life in modern Kenya, or is it an anachronism? If you have read Out of Africa, how does Isak Dinesen/Baroness Blixen’s real story differ from the fantasy to which the characters refer?

10. Esmé is initially attracted to Kenya by what she calls the "absence of intellectual criticism" [p. 79]. What does she mean by this statement? Does this aspect of the culture continue to appeal to her throughout the novel? If not, how does she resolve her ambivalence?

11. Iris and Hunter argue about the future of the African pastoral tribes [pp. 115&ETH;116]. Iris mourns the loss of their culture and traditions; Hunter says that this is no time for sentimentality–the Samburu and other tribes must modernize if they are to survive at all. Which of the two attitudes do you sympathize with?

13. Unhappy in her half-relationship with Hunter, Esmé wishes that she and Adam could be as content together as they were early on. "Being in love with [Hunter] had only meant insecurity, nostalgia, fear of losing him…. Suddenly it all seemed luminously clear. Love had very little to do with fear and emotional sabotage; love had to do with trust" [pp. 251&ETH;252]. Is this evaluation of love accurate or true? Does Esmé come to change her ideas about love by the novel’s end?

14. Hunter accuses Esmé of being too calculating and practical–"the way you evaluate all the risks, the costs, the consequences" [p. 251]. Is this an accurate assessment of her character? Why does Esmé make the decision she does when Hunter asks her to go away with him? Does she regret her decision in the end?

15. "It wasn’t just the beauty of Africa, it was its moral geography that I wanted to be part of" [p. 52], Esmé says early in her story. What does she mean by "moral geography"? Does she eventually attain her ideal? What does her talk with Peter at the end teach her about the country, and about herself?

Learn More About Rules of the Wild
print

The Yoga of Max’s Discontent

And After Many Days
Back to Top