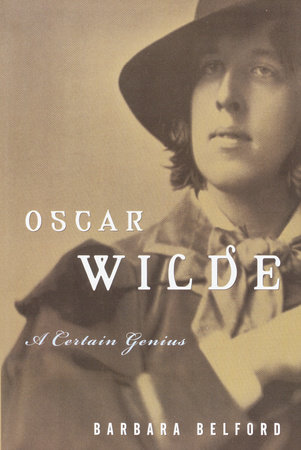 This discussion guide will assist readers in exploring Oscar Wilde. Hopefully, it will help create a bond not only between the book and the reader, but also between the members of the reading group. In your support of this book, please feel free to copy and distribute this guide to best facilitate your reading program. Thank you.

1. Reading Group Guide for OSCAR WILDE, by Barbara Belford
Consider Wilde’s strange childhood; his father was an adulterer and accused rapist, his mother was a controversial figure, and his brother was constantly jealous of Oscar’s abilities. Where do we see this reflected in his literature?

2. Belford says that homosexuality was an accepted part of English public schools at the time Wilde attended the Portora Royal School. Do you think Wilde first had his first stirrings of homosexuality here?

3. Christ was Wilde’s ideal. Where did this fascination with Christ come from? How did it affect his prose and poetry?

5. Consider the critics’ reaction to Wilde’s first work Poems. Do you believe they were justified? Wilde, who often scoffed at society and other people’s thoughts, seemed quite upset about these reviews. What does this say about Wilde and his feelings on his own work?

6. Belford believes Wilde evaded overt homosexual conduct while building his reputation, but soon rejected this deception for a “bolder deception” by insisting on “the freedom of the artist.” Some critics disagree with this. What do you think?

7. His writings torn apart by English critics, Wilde’s American lecture tour was a success. Considering who his audience was and which cities he visited, why was this?

8. Belford suggests Wilde married for real love, or perhaps what he considered real love. Do you agree?

9. Consider Constance Mary Lloyd. Why did such a talented, well-liked woman fall in love with Wilde? Why do you feel she stayed with him even after his homosexual affairs?

11. Why did Wilde insist his career was over after prison?

12. Do you see Wilde’s life as a success or a failure, as a whole? If not, what, if any, of Wilde’s life was successful, by your standards?

From the Hardcover edition.
Learn More About Oscar Wilde
print

A Man of Contradictions
Richard Ollard

The Quest for Corvo
A.J.A. Symons

Yours Ever
Thomas Mallon

Writers Between the Covers
Shannon McKenna Schmidt and Joni Rendon

Who Was Dracula?
Jim Steinmeyer