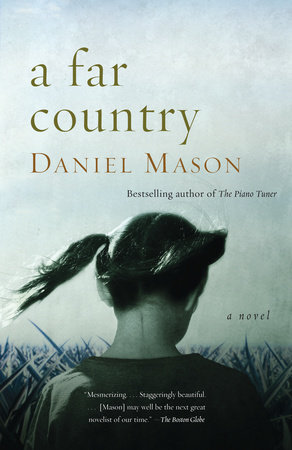 “Mesmerizing. . . . Staggeringly beautiful. . . . [Mason] may well be the next great novelist of our time.” —The Boston Globe

The introduction, discussion questions, and suggestions for further reading that follow are designed to stimulate your group’s discussion of Daniel Mason’s A Far Country, a stunning new novel about a young girl’s journey through a vast, unnamed country in search of her brother.

In the impoverished backlands of an unnamed country, an unusual child is born into the family of a cane cutter. Isabel is born with an “open” body—the ability to see the future at times, to sense spirits others cannot see, to calm children. Her parents decide to have her body “closed,” because her gift is often accompanied with illness and suffering. All through her childhood Isabel’s closest companion is her older brother, Isaias, but when war and political violence make village life unbearable, Isaias leaves for the city in the hopes of finding work as a musician. When drought strikes, Isabel’s parents send her to the city as well, but once she arrives she discovers that Isaias has disappeared. Weeks and then months pass, until one day, armed only with her unshakable hope, she descends into the chaos of the city to find him. What follows is a haunting meditation on endurance, survival, and whether faith can sustain us when hope is all but lost.

1. A Far Country opens with a description of a long drought that caused the inhabitants of Isabel’s village to leave their homes for refugee “drought camps” when she was three. The hunger that drove them from their homes is “as if something alive, a pale hoofed creature, who tore through on bristling haunches or ambled out of the white forest with a worn suit and a broken face, a monster or a devil” [p. 7]. How do the opening pages set the mood for the story that follows?

2. How important is the sense of place in A Far Country? How do you interpret the “far country” of the title?

3. Does the description of their early life together explain the powerful connection between Isaias and Isabel [pp. 12-19]? Does it seem, as the story proceeds, that Isabel feels more for Isaias than he feels for her?

4. Mason chooses to narrate the story primarily through the mind and eyes of Isabel, carrying the reader with her from childhood into adolescence. How does this narrative perspective influence the reader’s experience of the loneliness and exile Isabel endures? How does this choice affect the reader’s sense of Isaias? Does Isabel’s idealization of Isaias make the ending more surprising?

5. What does home mean to Isabel? On the flatbed that takes her to the city Isabel sings a song to herself about a fish swimming home against the current [p. 87]; the following two paragraphs reveal her train of thought as she is carried farther away from home. What do these passages tell us about what is unique in Isabel’s character?

6. How do the details about the Isabel’s uncle’s death [p. 42], the road builders [p. 56], the new cane harvesting machines [p. 63], the police brutality [p. 63], and the sign that reads "progress into the backlands is progress forward" [p. 56] suggest the changes taking place in Isabel’s country? Do these changes spell the destruction of her family and their way of life? Is her father correct in saying that they must send Isabel to the city [p. 63]?

7. Isabel’s mother is against sending Isabel to the city because “she’s smart like an animal’s smart. Like an animal knows what’s near and senses things before they come. I don’t know what good that does in the city” [pp. 64-65]. Later, Isabel thinks, “I am like the girl on the flatbed . . . the black-haired girl who spoke a language no one knew. . . . What good is anything I know?” [p. 148]. What is different for Isabel in the city? Does being a migrant necessarily involve a dislocation from her past, a sense that her past self is now irrelevant? Does she learn, eventually, how to adapt and how to survive?

8. On the journey to the city, Isabel meets a girl who believes that getting a job as a waitress will allow her to buy a dress, wear lipstick, and get her hair done. She shows Isabel a photograph of “a cream-yellow house with high walls, a fountain, and an aristocratic dog” [p. 72]. Similarly, the girl with whom Isabel shares the weekend job of waving flags for a political candidate has romantic ideas about her future. Does Manuela’s life more realistically reflect what girls from the backlands can expect when they trade rural labor for urban labor?

9. What does Alin offer to the people who buy his portraits? What has he done in making the portrait of Isaias that has the effect of making Isabel’s hand shake [p. 143]? When Manuela sees the portrait of Isaias, she says to Isabel, “It’s not elegant at all. Poor people paying so much to pretend they’re something that they’re not is pathetic, not elegant” [p. 144]. What does this tell us about Manuela?

10. What details make Isabel’s visit to the disappeared persons department so important to her story [p. 188]? Why, according to the clerk there, do so many people go missing? Why does the man take pity on her? What is the significance of the lines of verse on the wall above the box of pictures of missing persons? (The lines are excerpted from an actual poem called "Morte e Vida Severina," about the life of a migrant worker in northeast Brazil, by João Cabral de Melo Neto.)

11. While looking at a poster of a missing girl Isabel experiences “a sense of something tearing: a strange sense that seemed to have traveled to her from a far country, and she knew that this girl wouldn’t be found” [p. 200]. She can suddenly tell who, among the missing, will be found and who will not. Does this event change her approach to searching for Isaias [pp. 205-09]?

12. How would you describe the story’s structure? If Isabel’s search for Isaias is the central action of the novel, what is the effect of her finding him? Does it resolve the plot’s tension? Does it subvert our notions of what a “happy ending” of a novel might be, and if so, how? Does her eventual acceptance of Alin mean that she has grown beyond her exclusive need for Isaias [p. 243]?

13. Mason’s first novel, The Piano Tuner, was widely admired for the power of its descriptive writing. What are the most notable characteristics of his style? Select a few striking passages for discussion.

14. Why is the final chapter called “Theresa”? What does it suggest about the future? What is the emotional effect of the ending?

Daniel Mason was born and raised in Northern California. He studied Biology at Harvard, and Medicine at the University of California, San Francisco. His first novel, The Piano Tuner, published in 2002, was a national bestseller and has since been published in 27 countries. Daniel has also published a short story in Harper’s, on the life of the artist Arthur Bispo do Rosario. Currently, he lives in San Francisco, where he is at work on his third book.

I Am My Country