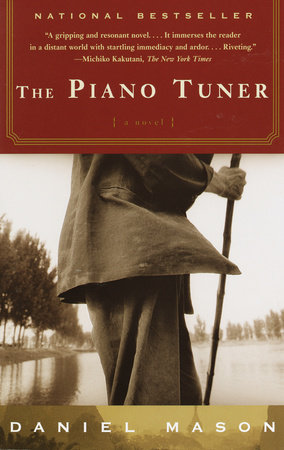 “A seductive and lyrical novel that probes the brutalities and compromises of colonization, even as it celebrates the elusive powers of music and the imagination.” —Michiko Kakutani, The New York Times

The introduction, discussion questions, suggested reading list, and author biography that follow are designed to enhance your group’s reading of Daniel Mason’s enigmatic and compelling first novel about the Anglo-Burmese war, a rogue major, and the fate of an ordinary piano tuner drawn into an extraordinary entanglement.

When Edgar Drake is summoned to the British War Office and asked to tune an eccentric major’s 1840 Erard grand piano in the jungles of Burma, he is both confused and intrigued. The year is 1886, and the British Empire is attempting to tighten its control of its colonies in the Far East, to fend off French rivals in the Mekong Delta, and to quell the resistance of a confederacy of local Shan tribes in northern Burma. Surgeon-Major Anthony Carroll has established an important foothold in Mae Lwin, employing unconventional methods—reciting poetry and playing music—to negotiate treaties with Burmese opponents of British rule. He has demanded that a grand piano be hauled through the jungle and now requires a tuner to be sent to him as well. Such eccentric behavior causes the major to be regarded by some as a genius and by others as a suspicious renegade, but, as Edgar soon realizes, his actions may conceal even stranger truths. As Edgar embarks on his first trip abroad, the beauty and mystery of Burma, its entrancing landscape, its customs and music, and an exotic woman named Khin Myo cast a spell that he cannot resist. After his task is completed, Edgar decides to stay on with Anthony Carroll—a choice that will change his life as he becomes entangled in a series of events and emotions that spin dangerously out of control.

Written in a prose capable of both historical precision and mystical lushness, The Piano Tuner explores British colonialism at a moment of crisis and the ill fortune of a man who confuses “the cause of music” with the cause of empire.

1. In briefing Edgar Drake about Anthony Carroll, Colonel Killian tells him, “there are men who get lost in the rhetoric of our imperial destiny, that we conquer not to gain land and wealth but to spread culture and civilization” [p. 18]. Is this true of Carroll? Is he motivated to spread Western culture, via music, to the East? Is it true of Edgar? What does the novel suggest about the purpose of imperialism?

2. Why does Edgar decide to accept a mission to travel thousands of miles to tune a piano in a remote and dangerous jungle at the furthest outreaches of the British Empire? Why does his wife, Katherine, encourage him to go?

3. Why is Anthony Carroll viewed with such a mixture of reverence and suspicion by the British military? In what ways does his behavior defy convention?

4. As he contemplates his voyage to Burma, Edgar views London on a foggy night: “He could see the vague line of the shore, the vast, heavy architecture that crowded the river. Like animals at a waterhole, he thought, and he liked the comparison” [p. 23]. Why is this a particularly apt simile for Edgar to use at this moment? Where else in the novel does Mason reveal the depth of Edgar’s consciousness through his impressions?

5. Edgar writes to Katherine that the “entire trip has already coated itself in a veneer of seeming, a dreamlikeness” [p. 146]. In what ways is this true? What gives Edgar’s experiences an otherworldly quality? What role do his dreams play in the novel?

6. During the tiger hunt, Captain Witherspoon spots some egrets and asks if he can shoot them. “Not here,” Captain Dalton tells him. “The egrets are part of the founding myths of Pegu. Bad luck to shoot them, my friend.” To which Witherspoon replies, “Superstitious nonsense. . . . I thought we were educating them to abandon such beliefs” [p. 94]. What does this exchange suggest about the British attitude toward colonial subjects in Burma? About the cultural differences between the British and Burmese?

7. What is the significance of the boy to whom Edgar gives a coin being accidentally shot by Captain Witherspoon? Why does Edgar refer to the coin as “a symbol of responsibility, of misplaced munificence, a reminder of mistakes, and so a talisman” [p. 104]? In what sense does Edgar inherit the boy’s “fortune”?

8. How is Edgar perfectly suited to the task set for him by Anthony Carroll? How do his dreaminess, his propensity for getting lost, his clumsiness, and his political naïveté all serve Carroll’s ends?

9. After he’s been away from London for several months, Edgar writes to Katherine that he has changed, although, he admits “What this change means I don’t know, just as I don’t know if I am happier or sadder than I have ever been.” He also says, “There is a purpose in all of this . . . although I do not know yet what it is” [p. 252]. How has Edgar changed? What has changed him? What is his real purpose in Burma?

10. What kind of woman is Khin Myo? Is her attraction to Edgar real or feigned? What is her relationship to Anthony Carroll? How is she related to the woman with the parasol at the beginning and end of the story? Is she, as Nash-Burnham suggests in the ghostly conversation in the guardhouse, Edgar’s “creation,” a part of his “imaginings” [p.302]?

11. Music is a recurring theme in The Piano Tuner, from the hauntingly beautiful song the Man with One Story hears in the desert, to the love ditty Anthony Carroll plays on a flute to fend off attackers in the jungle, to the Bach fugue Edgar plays for the sawbwa, to the call of insects scraping their wings in the jungle. What roles does music play in the novel? How does it affect its listeners? What is its ultimate importance in the story?

12. After Edgar escapes from the guardhouse, he reads the note that Carroll had given him—a passage from his translation of The Odyssey about the Lotus-Eaters who “forget the way home” [p. 310]. In what ways has Edgar “tasted” of the lotus? Why does he find Burma so alluring? What does the lotus signify in this context?

13. Why does Edgar cut the piano loose from its moorings and send it down the Salween River in a rainstorm? In what way is this striking image—a grand piano floating downriver on an unmanned raft and being “played” by the rain—suggestive of the novel’s larger themes?

14. What accounts for The Piano Tuner’s elusive, hard-to-pin-down quality? What remains mysterious after the book is finished? How does Mason’s prose style contribute to the sense of ambiguity that pervades the novel?

15. At the end of the novel, Captain Nash-Burnham tells Edgar that Anthony Carroll is a traitor to England and suggests a number of possible roles for the Doctor: “Anthony Carroll is an agent working for Russia, He is a Shan nationalist, He is a French spy, Anthony Carroll wants to build his own kingdom in the jungles of Burma” [p. 301]. Edgar thinks Carroll is a genius and a peacemaker. Which of these interpretations is correct? Does the novel present enough evidence to decide?

16. Why does Mason begin and end the novel with the image of the sun and a parasol? What symbolic or cultural values might these images represent?

17. What does the novel as a whole suggest about the British Empire—its effects on colonized peoples and on those who try to rule them—in the late nineteenth century? How is this historical portrait relevant to our own time and the political and cultural conflicts between the West and the
Middle East?

18. The Piano Tuner participates in a tradition of literary works that try to fathom colonized cultures vastly different from the author’s own. What features does Daniel Mason’s novel share with such predecessors as E. M. Forster’s A Passage to India, Joseph Conrad’s Heart of Darkness, or George Orwell’s “Shooting an Elephant”? How is it different from these works?

Daniel Mason received his bachelor’s degree in biology from Harvard College in 1998, and spent a year researching malaria on the Thai-Myanmar border, where much of The Piano Tuner was written. He is currently a medical student at the University of California, at San Francisco. The Piano Tuner is his first novel.

Doc
Back to Top