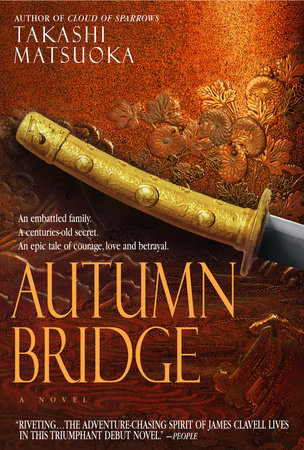 The questions, discussion topics, and author biography that follow are intended to enhance your reading of Takashi Matsuoka’s Cloud of Sparrows and Autumn Bridge.

We hope they will enrich your experience of these captivating novels.

Transporting readers to the beauty and intrigue of nineteenth-century Japan, Takashi Matsuoka has crafted a dazzling epic in two parts, Cloud of Sparrows and its sequel, Autumn Bridge.

A magnificent adventure in the tradition of James Clavell’s Shogun, the journey begins in 1861, when a beautiful American missionary arrives on the shores of Edo Bay and enters an exotic world of noblemen and geishas, samurai and Zen masters. In Cloud of Sparrows, Emily Gibson and Genji, Lord of Akaoka, begin a nimble test of wills in the midst of an invasion that threatens their most cherished beliefs. With spies and chilling omens lurking at every turn, Genji must flee to the spectacular Cloud of Sparrows Castle. The undertaking brings together an unlikely band from West and East, including Lady Heiko, whose prowess in the romantic arts is equaled by her capacity as a ninja.

Autumn Bridge presents an overwhelming revelation that links prophesies of the past–as far-reaching as the fourteenth century–to Lord Genji’s improbable alliance with Emily. In the year 1311, while tumult rages outside Cloud of Sparrows, a beautiful woman sits down to write an extraordinary tale. Her words will not be uncovered for another five hundred years, when Emily will translate the troubling Autumn Bridge scrolls and see unmistakable threads of her own life woven into these ancient premonitions.

Revealing historical details about the pivotal figures introduced in Cloud of Sparrows, Matsuoka presents a stunning finale that encompasses not only their origins but the empire’s fate–and beyond.

1. What commonalities exist between the Japanese and American cultures portrayed in the novel? What lies at the heart of their greatest impasses?

2. Are the warriors in Cloud of Sparrows motivated by a universal code of honor? What psychological “weapons” must they each possess? Why have Genji and his people become so militarily vulnerable?

3. Would Mary Anne and Heiko consider themselves to be working in the same profession? Which of them garners more respect from her clientele?

4. Discuss the perceptions of physical beauty described in the novel. In what way are the characters defined by their appearance? What determines whether a visual cue will translate into seductiveness?

5. Power struggles, on both a personal level and an international one, drive much of the novel’s plot. How do gender and ancestry contribute to power in Cloud of Sparrows? What other factors are relevant? Who are the novel’s ultimate victors?

6. What symbolic bridges are crossed in Autumn Bridge?

7. In what ways is Lady Shizuka’s tale repeated by successive generations? To what degree are her prophesies a source of inspiration, despite their tragedy? Do the novel’s spirits appear to be purveyors of evil, or merely its messengers?

8. Chapter Seven’s epigraph includes the observation that “courage and kindness are inseparable.” Has this aphorism proven to be true in your life? What do you make of the quote’s observations regarding the nature of men and women?

9. What parallels can be drawn between Jimbo and Makoto? How do Genji’s children embody various aspects of their father?

10. What is the effect of the novel’s closing scenes? Do the final paragraphs, depicting birth and death simultaneously, reflect or contradict the image of Abbess Jinkotu (Kimi) in a postwar climate?

11. While Cloud of Sparrows provides details about Emily’s painful childhood, Autumn Bridge describes Genji’s ancestral history through many generations. In what way do these notions of the recent past versus a distant one reflect how the characters perceive destiny? Do any family legacies shape your own choices for the future?

12. Themes of military, economic, and cultural dominance flow through both novels. How do these forces seem to evolve between the fourteenth and twentieth centuries? Where do love stories and religion factor into the equation of conquest?

13. Genji’s attempts to outlaw the subjugation of the outcast class are met with resistance by those who view Western lawmaking as a dangerous defiance of ancestors, necessitated only by societies that have no guiding principles. To what extent do contemporary governments around the world continue to grapple with this conundrum?

14. Takashi Matsuoka created a rich cast of supporting characters, including Matthew Stark, Shigeru, Go, and Hanako. How do their decisions enrich the realism of the novels?

15. What do the novels indicate about the significance of storytelling itself and the vagaries of interpretation? How do various generations perceive the narratives of their elders, both in the novels and in your own experience?

TAKASHI MATSUOKA grew up in Hawaii. He lives in Honolulu, where he was employed at a Zen Buddhist temple before becoming a full-time writer.
Learn More About Autumn Bridge
print

Taken by the Prince
Christina Dodd

To Kiss a Spy
Jane Feather

Come Back to Me
Josie Litton

Fairest of Them All
Teresa Medeiros

My Lord and Spymaster
Joanna Bourne

This Side of Heaven
Karen Robards

The Time Weaver
Shana Abé
Back to Top