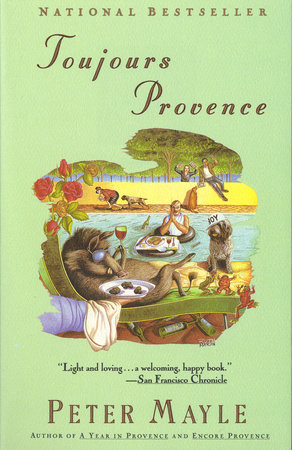 From a birthday celebration that redefines the meaning of "country picnic" to the furtive business of buying truffles and a short history of pastis (the pride of Provence), in Toujours Provence Mayle recreates sumptuous feasts, shopping excursions, and wine-tastings, enhancing each event with commentary from experts eager to impart their wisdom about the ways of the countryside.

1. In "Boy," "Passing 50 Without Breaking the Speed Limit," and "Fashion and Sporting Notes from the Ménerbes Dog Show," Mayle offers affectionate portraits of his wife. Would you have liked to learn more about her? Do you think that as a woman she has a different perspective on life in Provence?

2. Why does Mayle create an air of mystery and suspense when he describes his two excursions to see Monsieur X, the truffle seller? Does the extreme secretiveness surrounding the buying and selling convey something more than the extraordinary value placed on truffles?

3. Why does Mayle find "the wise, venal, and congenitally crafted Massot" [p. 90] so appealing? How do Massot’s peculiarities and his approach to life add an unexpected dimension to Mayle’s portrait of Provence?

4. In "As Advertised in Vogue," Mayle mocks the Beautiful People who are discovering Provence. Are his criticisms legitimate? Can the "invasion" of outsiders bring benefits to Provence and to other rural areas without destroying the peace and beauty that make them so attractive?

5. Régis, the track suit-wearing gourmet, has definite theories about why France provides the best food and best eating experiences in the world [p. 166-7]. How do American eating habits and expectations compare to those of the French and the English? From your own experience, is it possible to find great, inexpensive restaurants in the United States? Do diners and small town restaurants fill the same role in this country as relais routiers do in France?

6. One of their visitors accuses the Mayles of "going native" [p. 231]. How do the vignettes in Toujours Provence differ from the stories in A Year in Provence? Do they reflect fundamental changes in Mayle and his way of thinking about life?

Peter Mayle spent fifteen years in the advertising business, first as a copywriter and then as a reluctant executive, before escaping Madison Avenue in 1975 to write educational books for children. In 1990, Mr. Mayle published A Year in Provence, which became an international bestseller. In addition to writing books which have been translated into more than twenty languages, Mayle has contributed to the Sunday Times, Financial Times, Independent, GQ and Esquire. He and his wife and two dogs live in the South of France.
Learn More About Toujours Provence
print

The Road to Burgundy
Ray Walker

Every Day in Tuscany
Frances Mayes

A Year in the World
Frances Mayes

When in French
Lauren Collins

The Soul of a Chef
Michael Ruhlman

As They Were
M.F.K. Fisher

A Trip to the Beach
Robert Blanchard and Melinda Blanchard

The Sharper Your Knife, the Less You Cry
Kathleen Flinn