After This Reader’s Guide 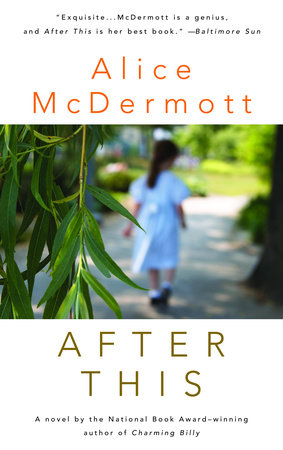 After This Reader’s Guide

print
After This Reader’s Guide

Winner of the National Book Award, Alice McDermott has captivated countless readers with her tender portrayals of family life in America, from Irish-Catholic suburbia to the beaches of Long Island and Manhattan’s historic streets. After This, her sixth novel, takes us to the cultural transitions of the mid-twentieth century—the span between World War II and Nixon, when a sexual revolution, Vatican II, draft registration for the controversial Vietnam conflict, and other headlines spelled upheaval for families across the nation.

Bringing those cultural shifts vividly to life, McDermott introduces us to Mary and John Keane, a middle-class couple raising four children as the country arrives at historic crossroads. Michael and Annie test the boundaries of their changing world, while the eldest and most cautious sibling, Jacob, is sent to war. Young Clare proves to possess a worldliness that belies her innocent sensitivity. Together, the Keanes navigate the clashes of a traditional life and modern freedom. Portrayed by McDermott through a serious of seamless, beautifully wrought vignettes, their story opens our hearts to new understandings of fate and everyday mercy.

The questions and discussion topics that follow are designed to enhance your reading of Alice McDermott’s After This. We hope they will enrich your experience as your book club explores this moving novel.

1. Alice McDermott’s writing style has been widely praised for its evocative imagery and powerful use of understatement. How were you affected by the quiet lines that told you of John’s future death (pages 130-131) or of Jacob’s fate in Vietnam (page 199)? What everyday images best capture the most emotional events of your life?

2. The initial scenes in After This tell us that Mary dated her brother’s friend George before she married John, and that she had given in to Mike Shea’s advances at a party. How did these facts shape your understanding of her as you read about her life? Before she was married, what did Mary seem to believe her destiny was?

3. Discuss the memory of the “baby grand.” How would you describe Mary and John’s life at that point, before the birth of their children? What was Mary discovering about her husband when they were newlyweds? How did the death of his brother shape John?

4. What was foreshadowed by the scene at Jones Beach, not only in terms of Vietnam, but in the temperaments of the children and the dynamics of the family as a whole?

5. What do Mary and John teach their children about the role of religion, from the time they are young (saying an “Angel of God” during the 1960 hurricane) to the novel’s closing scene? How does the children’s relationship to the church differ from their parents’ relationship to it? Did you adopt your parents’ views on religion?

6. Does the typical twenty-first-century American family resemble the Keanes? Has the very definition of family shifted? What would the future likely hold for Clare and Gregory?

7. Mary became an adult when images of the ideal woman were almost always domestic; she was even expected to cook dinner for her father and brother each night, regardless of her plans for the evening. Her daughters would have access to far more career options, as well as birth control and legal abortions. Was the generation gap of the 1960s more significant than for other generations of mothers and daughters? How did gender roles for men shift during this time period? Did John’s sons fulfill his expectations?

8. How does the novel’s setting affect the storyline? How was the turmoil depicted in After This playing out elsewhere in the country? What is distinctive about the locales so frequently featured in Alice McDermott’s fiction?

10. Part III (page 79) begins with John’s thoughts: “Man is immortal, or he is not. And if he is, there’s the whole question of whom you pray to. If he’s not, then prayer is wishful thinking. You either pray to the dead or you don’t.” What is the greater quandary he wrestles with in this passage? Do you think he ever resolves it?

11. How did war and politics shape family life in the 1960s and early 1970s? Has the impact of one on the other changed in contemporary America?

12. As Annie bluffs her way through the Edith Wharton dialogue and embarks on a relationship with an English lover, how does she seem to view her past? How is she defining herself in those scenes? What enabled her to have an identity that seems so different from her mother’s?

13. The friendship between Pauline and Mary is often referred to as obligatory, a fulfillment of the commandment to “feed my lambs.” Is this friendship by contemporary standards? Is that sense of obligation waning, and if so, what are the consequences for communities in general? Does Mary seem to have any friendships like Annie and Susan’s?

14. How would you have responded to Sister Lucy’s story (page 214) if you had been one of her students?

15. What was your reaction to the novel’s closing conversation? What is the impact of the priest’s question about distinguishing God-given gifts from an accomplishment attained only through strenuous effort? How does that scene speak to the Keane family’s destiny?

16. What comes to mind when you consider the novel’s title? What aftermaths resonated the most with your own life story?

17. In what ways does After This complement and amplify the themes of McDermott’s previous fiction? What might the Keanes think of the other families she has created?

Moral Disorder by Margaret Atwood; Baker Towers by Jennifer Haigh; When Madeline Was Young by Jane Hamilton; L’America by Martha McPhee; The Last of Her Kind by Sigrid Nunez.
Learn More About After This
print

The Other Side of the Bridge

The Forest Lover
Back to Top