Voices in Our Blood Reader’s Guide 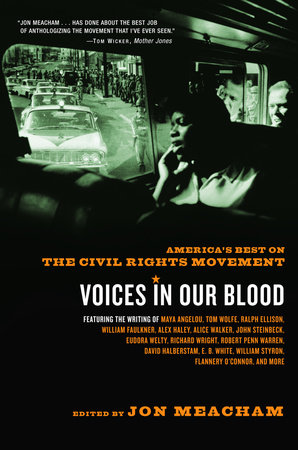 Voices in Our Blood Reader’s Guide

2. It’s often thought that the North was ahead of the South on race relations.  Based on the piece by James Baldwin, do you think that’s true?  And if not, why not?

3. Rebecca West wrote a powerful piece for The New Yorker about a lynching trial in Greenville, South Carolina, just after she had written about Nuremberg. "Lately Europe had not been really what any of us could call a peaceable community," she said.  Are there parallels between Hitler’s Germany and the Jim Crow South?  If so, what are they?

4. When Robert Penn Warren returned to the South to talk to people about the desegregation decisions, a Southern woman he knew who lived in the North said to him, "’I feel it’s all happening inside of me, every bit of it.  It’s all there.’ I know what she meant.’"  What did she mean?  And how do the voices collected in Warren’s long essay illustrate the conflicting forces that shaped the movement?

5. After reading Taylor Branch’s portrait of King from "Parting the Waters" and "An Interview with Malcolm X," what do you think were the key issues both uniting and separating the two leaders?  Were they more alike, or unlike? And do you think Louis Lomax had it right in "The Negro Revolt Against ‘The Negro Leaders,’" which tries to shed light on the fissures within the movement?

6. In "Bloody Sunday," John Lewis recalls the day he was beaten on the Pettus Bridge in Selma, Alabama, and links the images of that day to President Johnson’s call for voting rights legislation.  Do you agree or disagree with the proposition that the moral witness in the streets led directly to action in Washington?

7. In both Lewis’s memoir and Bernard Weinraub’s profile of Stokley Carmichael, the principals discuss tensions within the movement.  What were those tensions?  Do you think there were avoidable or at least manageable?  And given the accumulated weight of the narratives about the key figures–King, Lewis, Malcolm X, Carmichael–do you think the movement was made by certain personalities or would have largely unfolded the same way no matter who stood at the pinnacle of the organizing forces?  In other words, was the movement the product of personalities or more impersonal, inexorable forces?

8. Why the overarching sense of bleakness in Pat Watter’s "Keep On A-walking, Children"?  What in his view had produced such chaos so relatively quickly, and do you think there is an implicit prescription for ongoing social action in his essay?

9. Using David Halberstam and Tom Wolfe’s reporting, weigh the interplay of social movements in those days, from race relations to Vietnam, in the North and the South.  What happened to the seeming clarity of the early sixties?

10. What is the nature of the relationship between whites and blacks in Howell Raines’ "Grady’s Gift"?  Do you think the characteristics of that relationship were more or less prevalent in those decades, and, if so, what influence do you think those forces had on the course and climax of the movement?

Learn More About Voices in Our Blood
print

Wish You Were Here
Back to Top