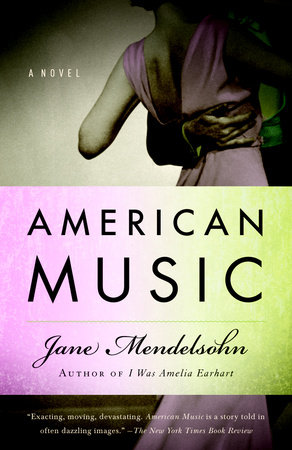 The introduction, discussion questions, and suggested further reading that follow are designed to enhance your group’s discussion of American Music, the mesmerizing new novel by Jane Mendelsohn, best-selling author of I Was Amelia Earhart.

American Music is a novel about stories—where they come from, how they live in the body, and what they reveal about the intricate connections between past and present.

When Honor, a physical therapist, begins to work with the traumatized Iraq war veteran Milo, strange things begin to happen. Instead of easing the pain that afflicts him from a devastating spinal cord injury, Honor’s touch releases a series of powerful memories that rise up unbidden in the minds of both of them. These memories—and the vivid characters and stories they evoke—are fascinating, puzzling, at times frightening, and irresistible. Though Milo initially tries to end all contact with Honor, both of them feel compelled to follow these stories to their conclusion.

The cast of characters includes Joe and Pearl, a married couple from the 1930s, and Pearl’s cousin Vivian, with whom Joe falls in Love. Iris, the pregnant wife of a field doctor court-marshaled for insubordination during the Vietnam war, and her daughter, Anna, who will be shamed for having a child out of wedlock. The novel extends even further into the past through memories of an exotic love triangle between Parvin and Hyacinth, a seventeenth century Turkish concubine and the eunuch who tries to free her, and the cymbal maker Avedis, alchemist to the Sultan and unrequited lover of Parvin.  But precisely how and why Milo and Honor are receiving these strange love stories—and how the stories are related to one another and to them—remain a mystery right up until the the end of the novel.

The complexities of American Music resist easy summation, and Mendelsohn’s luminous prose creates a dreamlike atmosphere that pervades the novel. Like Honor and Milo themselves, readers are asked to make connections between the stories that arise from Milo’s body and to participate in Milo and Honor’s struggles to make sense of them. And if the book demands of readers more interpretive work than much recent American fiction, that work is amply rewarded. American Music is an extraordinary love story, full of sudden turns and richly layered counterpoint. But it is also a provocative exploration of the effects of war on human consciousness—and of the relationship between narrative memory and physical and emotional trauma.

1. American Music is preceded by two epigraphs, one from Shakespeare: “O boys, this story / The world may read in me: my body’s mark’d / With Roman swords”; and one from Billie Holiday: “If you expect happy days, look out.” In what ways do these quotes introduce major themes of the novel? Why would Mendelsohn choose such disparate figures as Shakespeare and Billie Holiday?

2. Why has Mendelsohn chosen American Music for her title? In what ways is music important in the novel?

3. Milo at first resists Honor’s attempts to help him. What is the turning point that allows him to open up to her?

4. American Music is centered around the idea that stories reside in the body and can be released through touch. Is this simply a metaphor, or does it represent a process that can happen outside the pages of a novel?

5. In what ways are Milo and Honor like readers within the novel? Why do they feel driven to understand the stories that are emerging from Milo?

6. When a taciturn Vivian is being interviewed before her show at the Museum of Modern Art, one of the museum’s benefactors says: “I can see why you never married. You don’t want to reveal anything” (p. 63). What parts of her life does Vivian want to keep secret? In what ways is American Music as a whole about the process of keeping and revealing secrets? What are the novel’s most surprising revelations?

7. Why does Iris steal Vivian’s photographs? Is she justified in doing so?

8. What effects does Mendelsohn achieve by layering her novel with the stories of so many characters from such different time periods?

10. Mendelsohn’s prose style might be described as lyrical or impressionistic. What are the most distinctive features of her writing? How does it differ from more straightforwardly realistic narrative prose?

11. Is American Music primarily a love story? How are the love relationships between Joe and Vivian, Hyacinth and Parvin, and Milo and Honor connected?

12. What does American Music reveal about the trauma of war? How has Milo been affected by nearly being killed in Iraq and by being pinned under the body of a dead fellow soldier?

14. American Music is a novel of many disparate threads—different time frames, different characters and relationships, different generations in the same family. How does Mendelsohn bring these together at the end? What larger connections exist between all the stories in the novel?

Jane Mendelsohn is a graduate of Yale University. She is the author of two previous novels, including the New York Times best seller I Was Amelia Earhart. Her articles and reviews have appeared in The Village Voice, The Yale Review, the London Review of Books, and The Guardian. She lives with her husband and two children in New York City.

Vengeance Is Mine
Back to Top